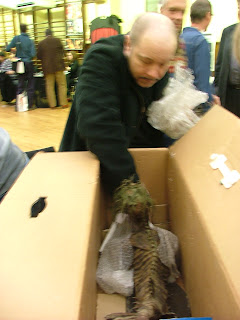 Yesterday I wrote to him thanking him for his help in finding the person behind the dead mermaid pictures. This morning he replied, as always, giving me much food for thought

You're very welcome. I first head about Juan Cabana a few years ago, and while his work is very admirable, it must be a real bummer stinking of fish and formaldahyde while you're trying to chat up girls in the pub. As you might have imagined, I've done a fair bit of taxidermy work myself in the past, and it can get very grisly trying to peel bloodstained fat from the inside of skin layers, and boil bones.

The fake mermaid and the pictures of the 'blackfella' have made me wonder if it might not be a wizard wheeze to invite the regular bloggers to create their own 'hoax' image of a favourite crypto-creature. Kind of like the Big Three, perhaps the Fake Three! I'll certainly make up some pictures, and we could even have a small competition--the winner being the first to guess how they were done. If nothing else, it should certainly sharpen the bloggers critical faculties when viewing putatively 'real' photos. If you would like, we could also put up some of the most famous crypto-images that have been taken in the past, and try to finally confirm them as either fake, or indeed--and why not--authentic.

Food for thought, anyway. I'll deliver another blog soon, the epic tale of how someone who was a theatrical pirate, part-time magician, Elvis impersonator and wannabe graphic artist nearly became part of an expedition to discover the legendary lost tribe of Epping Forest, living wild in the woods since World War II. It's gripping stuff, and--needless to say--completely true.

Where's the second spider story ?! Quite enjoyed the first one.

Where's the second spider story ?!
Quite enjoyed the first one ;)