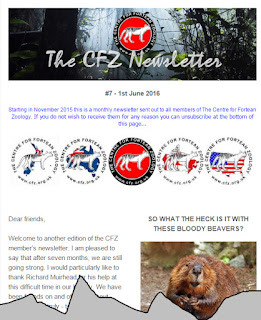 For those of you not in the know, at the beginning of each month we send out a newsletter to all members of the CFZ. The most recent (which went out yesterday) included articles on British beavers, a 19th Century Fortean emtomologist, recent out of place whales, Notes and Queries etc.

Posted by Jon Downes at 7:57 PM No comments:

Posted by Jon Downes at 3:41 PM No comments:

Bigfoot scouting trip,were growled at by something undetermined

Man claims to have found Bigfoot skull
Times Record News
TORIN HALSEY/TIMES RECORD NEWS Todd May holds what he claims is a pretrified Bigfoot head that he discovered while searching for fossils in ...
Posted by Jon Downes at 3:35 PM No comments:

ON THIS DAY IN - 1793 - Maximillian Robespierre initiated the "Reign of Terror". It was an effort to purge those suspected of treason against the French Republic.
And now some more recent news from the CFZ Newsdesk