A FOSSIL, BUT OF WHAT? 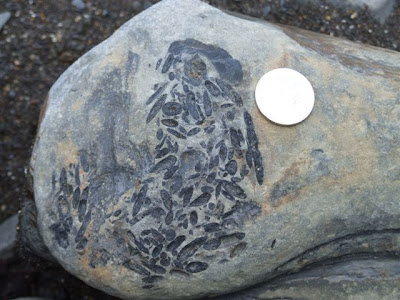 John and Dawn from the Haunted Skies project were down last weekend working on Volume Two. On Saturday morning they went for a walk along Bucks Mills beach and found this.

They (and Jon) presume that it is a fossil, but of what?

I am very pleased to introduce you all to a new guest blogger, namely my Mum Maria Clancy who not only introduced me to the world of cryptozoology and Forteana when I was still but a babe in arms, but also came up with the following poem:

Arachne the spider has no legs;

She'll nip you if you get to close

I RECEIVED THIS FREE OFFER AND DECIDED TO SHARE IT 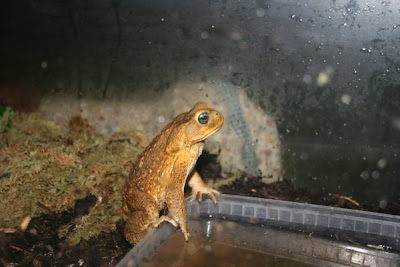 Max and I promised Corinna a cane toad for her birthday, and - a month later than we had planned - along came Mog.

She is a handsome batrachian who now lives on the side of what was once a dining table, and is now mostly Corinna's office....
Posted by C-E B at 9:49 PM No comments: 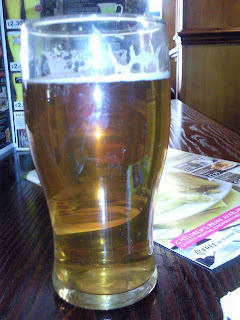 THIS pint is also a Phoenix Breweries one; it's called a Double Gold, and I have to say, it's rather delicious, hence my inability to wait till after the photo before drinking it.

On the blog today:

More yokai from Richard F, a new addition to the CFZ menagerie, the RSPB tantalise Jonboy, we have a new guest blogger, and the ufologists wonder what on earth created the pattern at Bucks Mills. Enjoy....
Posted by C-E B at 9:49 PM No comments:

On this day in 1839 Ira Davenport was born. Ira was one half of the Davenport Brothers, a magician duo famous for creating the spirit cabinet illusion (when a magician claims to have the power to contact the dead and is tied to a chair in a curtained cubical on the stage and musical instruments supposedly play themselves, candlesticks float above the curtains and balls are thrown high into the air, that sort of thing). They were exposed as nothing more than illusionists (not that that isn't a good thing) by a number of sources including one P.T. Barnum.

(Seriously, I wonder if the times Barnum gets mentioned on this blog this week reaches double figures, so far as well as this we've had Gage, Jumbo and this not to mention there is a 'Crypto-cons' blog I wrote earlier this week that Lizzy is proof-reading as we speak).

Raijū
The thunder beast. The animal is said to fall to the earth in a bolt of lighting. It can take the form of a tanuki, a weasel, a monkey, a cat or a wolf. It is wreathed in lightning. It can also fly around in the form of a ball of lightning.

The ﻿Raijū is said to be the companion of Raijin the Shinto god of lightning. Where lighting strikes the ﻿Raijū has clawed the ground. Raiju leaves claw marks in trees. People did not hide under trees during storms in case the thunder beast leapt upon them.

A school teacher from Kanayama Town, Gifu Prefecture, was scratched on the face by a Raijū during a thunderstorm. It left a scar. Raijū were rumoured to live atop Kaga Province's Mt. Hakusan and Shinano Province's Mt. Asama. One was captured and put on show in either Osaka or Kyoto. It resembled a fox and was kept in an iron net. It refused to eat or drink but its hair stood on end before the evening rain.

Another was captured in Lord Nagai's fiefdom of Iwatsuki whilst running through a vegetable patch after a storm. It refused to eat and drink and thus died. It was then stuffed. It looked like a puppy with bear’s claws. Its feet had many knuckles and folds. The pelt was thin except beneath the legs where it thickened.

The boddhisattva Kokūzō captured one of these beasts after it came down in a thunderbolt at Satoshō Town, Asakuchi District, Okayama Prefecture. From then on no more thunderbolts fell. The greatful locals held a festival on the 13th day of the first old month each year in celebration. For some unfathomable reason the Raijū hates camels. If images of camels are erected then the thunder will not come.

The ﻿Raijū also has the odd habit of sleeping in a person’s navel. When Raijin wants to awaken the beast he fires arrows into the unfortunate mortal’s belly button. This is the reason the superstitious sleep on their bellies during storms. A bird called Kaminari-no-tori is the favourite food of the thunder beast. In the Saishōji Temple in Niigata prefecture a supposed Raijū mummy is held in the hall of treasures. It seems to be no more than a mummified cat like those sometimes found in the walls of very old buildings in Britain.
Posted by C-E B at 9:40 PM No comments: