IS THERE ANYONE OUT THERE WHO KNOWS HOW TO.....

We are in the unfortunate position of having lost our Indesign guru and need a replacement. If you can help, please email Matt Salusbury on: mattsal@gn.apc.org 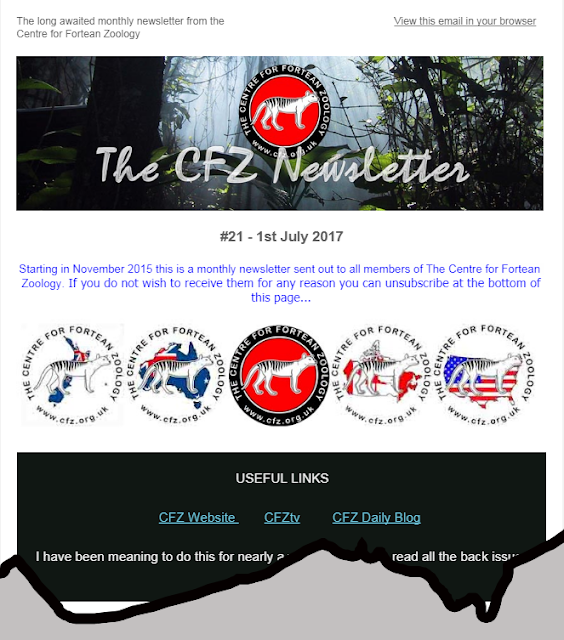 For those of you not in the know, at the beginning of each month we send out a newsletter to all members of the CFZ. The most recent (which went out a few minutes ago) included articles on a major league bigfoot hoax, big cat misreporting, a vintage report of an out-of-place "bl;ack arctic fox", an unidentified but apparently bipedal animal from Australia, a new book on vampires, CFZ in the news, the return of OTT, Expedition Profiles for 2017, Notes and Queries etc.

If you want to view a sample issue click here: http://tinyurl.com/pw7rw9l
Posted by Jon Downes at 12:33 PM No comments:

Bigfoot Evidence - blogger
Robert Dodson takes a look at a possible bigfoot captured in one of his videos. Was the viewer right? It looks like something standing there. Have a ...

Do Bigfoot Move Around In The Rain?

Bigfoot Evidence - blogger
It's been raining so Robert Dodson heads out to check the area for bigfoot tracks, and whatever else evidence he might find of their activity.

ON THIS DAY IN - 324 Battle of Adrianople: Roman Emperor Constantine I defeats his co-emperor Licinius, who flees to Byzantium
And now some more recent news from the CFZ Newsdesk