New at Frontiers of Zoology, Guest Blog by Scott Mardis:

Yesterday was a long and strange one. The highlights included starting Mick Farren's excellent new book 'Elvis died for somebody's sins not mine', which particularly amused me, because for many years my little ensemble started off our sets with a ditty about Albert Goldman called 'Elvis died for our sins'. Tuly Senor Farren and I are singing from the same Emma Goldmanesque hymnbook. Another highlight was guffawing my way through the first four episodes of season five of 30 Rock, whilst Corinna and Mother sat there impassive not getting any of it. Am I the only person that finds this show massively funny? And the third highlight was receiving Carl Marshall's expedition report from Borneo. I really am most awfully proud of these young men of the CFZ who go out and do intrepid stuff. Yes, there were downsides to yesterday, but I am in a good mood this morning and intend to stay there, so I won't go into details.

*  Jon Downes, the Editor of all these ventures (and several others) is an old hippy of 53 who - together with his orange cat (who is currently on sick leave in Staffordshire) and two very small kittens (one of whom is also orange) puts it all together from a converted potato shed in a tumbledown cottage deep in rural Devon which he shares with various fish, and sometimes a small Indian frog. He is ably assisted by his lovely wife Corinna, his bulldog/boxer Prudence, his elderly mother-in-law, and a motley collection of social malcontents. Plus.. did we mention the orange cat?
Posted by Jon Downes at 11:40 AM No comments:

CAYUGA LAKE -- The cool waters of Cayuga Lake have long invited boaters, swimmers and even divers into its shadowy depths.
"I would daresay I've spent more time underwater than any other human being in this area, in Cayuga Lake anyhow," said Jack Marshall, owner of Jack Marshall Professional Diving Service.
For more than 40 years, Marshall has trained aspiring divers, and even explored his underwater hometown history.
"People will research and find out where the old hotels were and they'd go out front and dump their garbage," Marshall said. "And people would find old bottles, neat things like that."
But beneath the surface lies much more than antique treasures.
At 38 miles long and more than 400 feet deep, the bottom of Cayuga Lake dips below sea level. And some say there's no telling what lives in the murky darkness.
"Of course the lake is very deep," Marshall said. "Not quite as deep as Loch Ness, but you know people have never been down there to see what's there. So who knows?"

CRYPTOLINK: Do It: Bigfoot research ongoing at Canadice Lake


The Old Forge Hardware Co. in Herkimer County is a 113-year-old business that helped settle the Adirondack Park. Here, one can buy anything from a fly fishing tippet to a toilet. On a recent visit, though, it was a sign emblazoned with two giant footprints in the store’s front window that grabbed my attention above all else and wouldn’t let go.

“BELIEVE’’ it began. “Have you had an unusual encounter? Unexplainable footprints? Strange, unfamiliar sounds? Creature sightings? All incidents, no matter how small, are important!!!’’ The sign carried the logo of something called the Northern Sasquatch Research Society and said to call one Norman Heid. Hold on a minute. Are we talking Bigfoot? Right here in New York?

I’ve always been intrigued by the legend of 8-foot tall, bi-pedal apelike humanoid creatures inhabiting the woods. I’ve seen the famous 1967 Patterson-Gimlin 16 mm footage of a giant, hair-covered being walking in Northern California more times than the Zapruder film. I’m glued to every Bigfoot documentary aired on History or Animal Planet and yes, those “Messin’ with Sasquatch” beef jerky commercials ignite primal laughter.

Naturally, I had to call Norman Heid. 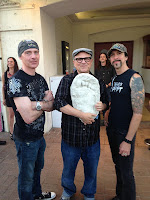 On this day in 2013 the Pokemon XY press conference and Q&A will be taking place at E3. Now, there will be some of you reading this (older people that might scoff at the idea of computer games and such 'new fangled' entertainment) to which this means very little but let me assure you this is a big deal. Word on the street is, as Huggy Bear might say, this will be the bigest reveal to date and may contain information about NEW pokemon types being added, the first time this has happened since the introduction of Dark and Steel types in Gen II over 10 years ago!
And now the news:


This is the trailer of the last big news a few months back, enjoy:
http://www.pokemonxy.com/en-us/videos/
Posted by Jon Downes at 10:48 AM No comments: