MUIRHEAD`S MYSTERIES: DO PLANTS HATE SIR CLIFF RICHARD OR WHO IS BEHIND SATANIC VEGETATION? 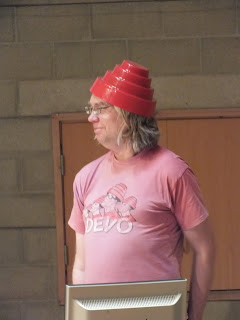 Yes ladies and gentlemen,boys and girls, crypto-dames and crypto-dudes, today I explore the very vexing matter of varying vocal favourites amongst vegetation! It has come to my attention that plants actually have the cheek to DISLIKE Cliff!! As in Sir Cliff Richard.  Can you believe it? How could anything, animal,vegetable or mineral dislike the great Cliff or anyone else, like me, with the word `Richard` in his name?! (With the exception of Richard Nixon). Isn`t it amazing how all great people, such as me of course, Lord Richard Freeman of Sumatra ,etc, are graced with the name `Richard` ?

This story appeared in The Guardian today, Friday April 19th and is apparently supposed to be taken seriously, as it is almost 3 weeks since April Fool`s Day. How a plant could prefer devilish (right,enough said, I don`t wish to get the Big J, author of the N.Korean hit ` Koi Carp Style` in trouble with heavy metal fans) , I mean Black Sabbath, to the Mighty Cliff , that wholesome, pure, handsome young man I fail to understand, probably because I am now feeling very vengeful against all flora after I blasted Devo`s `Pink Pussycat` at my buddleia today and it withered. Of course the flaw in my argument is Cliff`s `Devil Woman`, I dare not play that to the next flower I come across – fearing the effects!

Garden guru Chris Beardshaw is recommending a new technique for bigger blooms – blast your plants with heavy metal music. The broadcaster and gardening expert reveals on Radio 4`s Gardeners` Question Time` today that a constant diet of Black Sabbath worked wonders on a greenhouse full of plants, but exposure to Sir Cliff Richard killed every plant in a horticultural experiment (surely not, what, even `The Young Ones` and `Summer Holiday`??! – R)

The test came about because one of his horticultural students wanted to write a dissertation based on the effects of music on plants.

Quite what this means in the great scheme of things I don`t know. I vaguely recall my copy of a book called `The Secret Life Of Plants` saying that plants actually like classical music. Is it the volume or the lyrics that make a difference? And is playing any music at all really significant when that rose  or that tobacco for your loved one is going to end up with a very short life anyway?

Now I am confused. The mystery of The Bloop was, I believe, laid to rest last year. However, along comes this story on Wildlife Extra. Is it the same putative mystery whale or something completely different  Like I said, I am confused, but. that is nothing new. Can any of you clarify this and put me out of my misery?
Posted by Jon Downes at 3:46 PM 1 comment:

CRYPTOLINK: Largest fish ever caught in Arizona is a true freshwater monster

Several lakes around the world are thought to harbor monsters from Loch Ness to Lake Tahoe.

Now you can add Arizona's Bartlett Lake to that list, as one angler recently proved. Eddie Wilcoxson, 56, was sleeping on his pontoon boat at 2 a.m. when something truly gigantic began tugging on his 60-pound braided fishing line. After a 35-minute struggle, Wilcoxson finally caught sight of his Bartlett Lake monster: a behemoth flathead catfish.
"When it came close to the boat, I saw there was only one treble hook in the corner of his mouth," explained Wilcoxson, "so I backed off on the drag. If not, it would have ripped right out of his mouth."

THE GONZO BLOG DOO-DAH MAN HAS A POND

We are running a bit late today because my progress has been hampered by welcome telephone calls from Rob Ayling (who is back from his honeymoon), Tony "Doc" Shiels, who is as loveable as ever and some bloke trying to sell me double glazing.  I conducted an interview with René van Commenée about an hour ago, and it shall appear in these hallowed pages sooner rather than later. I also received a copy of Judge Smith's new album, and shall be talking to him about it, and his work with Mr Averell very soon. A chat with Judy Dyble is in the offing, as is a chat with Liz Lenten, so I have a busy week ahead. Yesterday I a managed to film two little egrets hunting for sand eels, so - on the whole - I am a happy bunny.

*  Jon Downes, the Editor of all these ventures (and several others) is an old hippy of 53 who - together with his orange cat (who is currently on sick leave in Staffordshire) and a not very small orange kitten (who isn't) puts it all together from a converted potato shed in a tumbledown cottage deep in rural Devon which he shares with various fish, and sometimes a small Indian frog. He is ably assisted by his lovely wife Corinna, his bulldog/boxer Prudence, his elderly mother-in-law, and a motley collection of social malcontents. Plus.. did we mention the orange cats?
Posted by Jon Downes at 1:30 PM No comments:

On this day in 1949 the actress Jessica Lange was born. Lange stared in the 1970s version of King Kong and in American Horror Story.
And now the news: