It is monday morning, and another week of blogs lies before us. I will be going away at some time on thursday and will not be returning until mondayish. During my absence the blog postings will return but the posted out notifications may not be as comprehensive as normal.

We will be back to the usual level of service by the middle of next week...

Today's blogs are (as usual) rather special and include:

We start off with a real exclusive - part four of our mammoth chat with the Judge Smith, ostensibly about his songstory double CD 'Curly's Airships', but actually about all sorts of things:
http://gonzo-multimedia.blogspot.com/2012/06/exclusive-judge-smith-interview-part_10.html

Here is another poetic reply from the lovely Liz Lenten of Auburn:
http://gonzo-multimedia.blogspot.com/2012/06/aunburn-dear-liz-has-done-it-again.html

There is news of a forthcoming radio interview for the multi-talented Chris Thompson:
http://gonzo-multimedia.blogspot.com/2012/06/forthcoming-chris-thompson-interview.html

Here is another song from the Mimi Page remix competition:
http://gonzo-multimedia.blogspot.com/2012/06/mimi-page-jigsaw-strike-force-charlie.html

We have a link to a smashing Jon Anderson interview:
http://gonzo-multimedia.blogspot.com/2012/06/link-interview-with-jon-anderson-voice.html

While we are waiting for Hawkwind reviews from Graham Inglis and Davey Curtis, here is a link to an insightful and rather touching review of the Holmfirth gig:
http://gonzo-multimedia.blogspot.com/2012/06/link-hawkwind-nanobots-holmfirth.html

On this day in 1979 John Wayne died. I'm sure that most of you will have heard of him but I've been told off about expecting people to know who the people I mention here are (I had Jon and Graham rather puzzled once when I mentioned the Prince of Wales once without an explanation) so here goes; Wayne was a Hollywood actor who stared in hundreds of films, mostly Westerns, the most well known being True Grit. From a Fortean point of view though Wayne is most interesting due to the fact that many think he said “Get off your horse and drink your milk.” which he never said on screen. Similar false quotes are attributed to William Shatner “Beam me up, Scotty!” and Michael Caine in the film Zulu “Dahn't yoo frow those ruddy spears aht me!” (that last quote isn't misspelled but an attempt to convey the cockney dialect in print)

Posted by Jon Downes at 9:42 AM No comments: 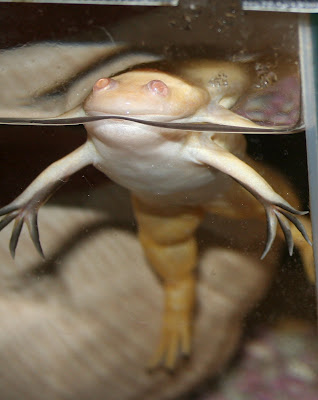 Corinna took this rather sinister picture of our lone clawed frog the other evening..
Posted by Jon Downes at 9:37 AM No comments:

LINK: The Sea Serpent That Got Away (Via Richard Freeman)

From the desk of Steve Willis, Central Library Services Program Manager of the Washington State Library:

After reading this description of a sea serpent as described on page 7 of the June 30, 1899 issue of The Tacoma Evening News, can anyone out there familiar with the creatures in Puget Sound identify what they really caught?

Collecting Specimens of Giant Barnacles, Sponges, Sea Cucumbers and Other Things For The Ferry Museum

“Ferry Museum has a large and varied assortment of material added to the list of attractions, but not until after a campaign lasting three days, and a shipwreck that lost the entire collection of the first day’s work.”

“An extreme low tide on the straits between the west end of McNeil’s Island and Meridian, off Moskito Island, County Commissioner C.H. Dow has told of wonderful large barnacles, as big as a quart bowl, the beasts having a mouth and jaws on them like the beak of the dinasaurs of the reptilian age. Other strange and wonderful monsters were said to abound in those waters, and a party was fixed up to go after them.”

“The barnacles were all that had been promised, and a big collection of them are now in place at the Museum, where their vicious snapping and terrific looking beaks are a terror to beholders. There is also a fine assortment of sea cucumbers, sea eggs, star fish; sea weed, shells of various kinds, some sponges and other specimens of much interest.”

“The catch of the season, however, was lost by the capsizing of the boat: the sea serpent, one of the most terrible and striking looking of the kind ever caught.”

“The animal, with a lot of other stuff, was in a yawl boat in tow of the steamer, when the struggles of the beast upset the boat, losing the entire collection in the Sound.”

PETER THAIN: Programme about the bloop

Hope you're keeping well. I found this on another site I regularly visit, and it certainly spiked my interest. The programme to which the article refers is available on YouTube and is interesting to say the least.
http://www.marsanomalyresearch.com/general-directories/commentary/54/the-bloop.htm

Have a nice evening,
Peter
Sent from a distant galaxy
Posted by Jon Downes at 9:28 AM No comments: