THE GONZO BLOG DOO-DAH MAN IS BARKING AT THE MOOOOOOOOOOOOON 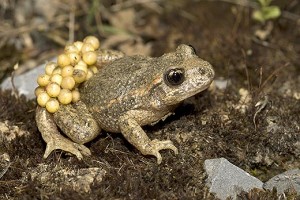 A couple of weeks ago I came across a Forum called `Our Nottinghamshire`(1) which has an article in it titled `The strange case of the Midwife Toad .An invader from via the Continent`. Dated March 21st 2013. I am including here the most salient points in the article,including a link to a photo (2) of the pond from whence the toads emerged.

“Several accounts in the early 2000s record the finding of an unusual toad, smaller than our usual toad as well as reports of a strange bell-like sound, a sound unfamiliar in our Isles, suggested something unusual was living in an obscure part of the county. In particular, the sightings and sounds have been recorded around Worksop such as along in Lindrick, where squashed toads on the road were finally identified as the species.

The origin of these aliens can be traced to either 1878 or 1898, when a nursery firm Horton and Smart accidentally introduced the species to their site as eggs on aquatic plants from . They would have remained there and subsequently died out in 1922 when the pool they had colonised was filled in by Bedfordshire county Council, if it were not for a W S Brocklehurst (3) collecting a dozen for his private pond. From this colony,his son Robert Brocklehurst brought 5 toads and 12 tadpoles from his father`s garden to his house at Woodsetts near Worksop...In the Spring of 1947 Mr Brocklehurst brought plants from his father`s pond at Bedford, and then in August he introduced the toads. He states that:

“ Nothing more was heard or seen of them that year.In the Spring of 1948 the toads were heard croaking and they continued to call all through the summer. In August about twenty tadpoles from were introduced. Most of them were well-advanced in growth and it is believed that they underwent metamorphosis that year. On april 15,1949, a toad was heard croaking,not at the pond site but from a large rockery built by a former owner of the house and standing in another part of the garden some 95 yards away from the pond.Croaking continued throughout the summer, both from the pond site and from the other rockery.”

A mild February in 1950 meant that two toads were heard calling although he noted they were not usually active until late April and May. What is well known to naturalists is the toad’s unusual breeding where after normal copulation the male takes the string of eggs around his legs and carries them with him until they hatch, although strangely they do not always live near water and can be found anything up to 25 yards from any water.

A Paul Batty on a herpetological website notes that no one knows how many colonies there are, but is clear they are spreading and establishing more in both Woodsetts and into Nottinghamshire. As an introduced species of course they receive no protection and understandably some people may be reluctant to reveal the survival of the species. However, soon the bell like sound of this rather amiable alien may be more familiar in the county. This web site has some excellent colour photos of Midwife toads in :  http://www.jasonsteelwildlifephotography.yolasite.com/midwife-toads.php

2. This is a link to a photo of the pond from whence the mid wife toads emerged in Worksop  http://www.ournottinghamshire.org.uk/page/more_toads?path=0p31p53p

3.  W.S.Brocklehurst was not the same Brocklehurst who introduced wallabies into the Peak District via a private zoo.

Bigfoot Evidence
A family of 4 in southeastern Oregon on Sunday released footage containing what they called a “Bigfoot” creature. Jason Dixon, his wife, son and ...

ON THIS DAY IN - 1801 - A 1,235 pound cheese ball was pressed at the farm of Elisha Brown, Jr. The ball of cheese was later loaded on a horse-driven wagon and presented to U.S. President Thomas Jefferson at the White House.
And now some more recent news from the CFZ Newsdesk