www.gonzomultimedia.co.uk/about.html
Oh what a tangled web we weave when… for the 16th year running we decide to host a very peculiar convention in the heart of the Devon countryside. Yes, boys and girls, tomorrow the great and the good of Forteana will be descending upon my home village of Woolsery demanding free drinks in my garden. And guess what? Those jolly nice folks at Metcheck, after having forecast quite pleasant weather have changed their minds, and - in Martin Eve’s words of doom – are now forecasting a deluge of Biblical proportions. However I think he was exaggerating when he foretold a plague of locusts, and boils all over the nether regions of the first born of the village. But I wouldn’t bet on it
THOM THE WORLD POET: The Daily Poem
http://gonzo-multimedia.blogspot.co.uk/2015/08/thom-world-poet-daily-poem_12.html
All roads lead to Cropredy and this year’s festiva...
http://gonzo-multimedia.blogspot.co.uk/2015/08/all-roads-lead-to-cropredy-and-this.html
THE GONZO TRACK OF THE DAY: Pink Fairies-Uncle Har...
http://gonzo-multimedia.blogspot.co.uk/2015/08/the-gonzo-track-of-day-pink-fairies.html
Mick Abrahams - Belgian Review (Translated)
http://gonzo-multimedia.blogspot.co.uk/2015/08/mick-abrahams-belgian-review-translated.html
Steve Howe Says Yes Is Happy to Be Able to Pay Tri...
http://gonzo-multimedia.blogspot.co.uk/2015/08/steve-howe-says-yes-is-happy-to-be-able.html
www.gonzoweekly.com
Daevid Allen, Spirits Burning, Gong, Don Falcone, Sophia Sage, Supertramp, Frank Zappa, Kate Bush, OMD, Roy Weard, Dogwatch, That Legendary Wooden Lion, Hawkwind, Jon Anderson, and Yes fans had better look out!
The latest issue of Gonzo Weekly (#142) is available to read at www.gonzoweekly.com, and to download at http://www.gonzoweekly.com/pdf/. It has Daevid Allen and Spirits Burning on the front cover together with an interview with Don Falcone by Doug about his collaborations with Daevid inside. Jon muses about Yes and fish (yes, the lower case f is intentional) and moans abput Paul McCartney whilst reviewing Alan Moore's latest. Doug also writes about Supertamp, John B-G talks about his memories of the Hammersmith Odeon, Lee remembers Orchestral Manouvres in the Dark. Thom waxes all poetical like, whilst the legendary Roy Weard continues his regular column. And there is a radio show from M Destiny at Friday Night Progressive, and one from those jolly nice chaps at Strange Fruit. There is also a collection of more news, reviews, views, interviews and water opossums with something to lose (OK, nothing to do with small marsupials planning to pray to St Anthony of Padyua for an intercession, but I got carried away with things that rhymed with OOOOS) than you can shake a stick at. And the best part is IT's ABSOLUTELY FREE!!!
This issue features:

All issues from #70 can be downloaded at www.gonzoweekly.com if you prefer. If you have problems downloading, just email me and I will add you to the Gonzo Weekly dropbox. The first 69 issues are archived there as well. Information is power chaps, we have to share it!
You can download the magazine in pdf form HERE:
http://www.gonzoweekly.com/pdf/
* The Gonzo Daily is a two way process. If you have any news or want to write for us, please contact me at jon@eclipse.co.uk. If you are an artist and want to showcase your work, or even just say hello please write to me at gonzo@cfz.org.uk. Please copy, paste and spread the word about this magazine as widely as possible. We need people to read us in order to grow, and as soon as it is viable we shall be invading more traditional magaziney areas. Join in the fun, spread the word, and maybe if we all chant loud enough we CAN stop it raining. See you tomorrow...
* The Gonzo Daily is - as the name implies - a daily online magazine (mostly) about artists connected to the Gonzo Multimedia group of companies. But it also has other stuff as and when the editor feels like it. The same team also do a weekly newsletter called - imaginatively - The Gonzo Weekly. Find out about it at this link: www.gonzo-multimedia.blogspot.com/…/all-gonzo-news-wots-fit…
* We should probably mention here, that some of our posts are links to things we have found on the internet that we think are of interest. We are not responsible for spelling or factual errors in other people's websites. Honest guv!
* Jon Downes, the Editor of all these ventures (and several others) is an old hippy of 55 who - together with an infantile orange cat named after a song by Frank Zappa, and a small kitten totally coincidentally named after one of the Manson Family, purely because she squeaks, puts it all together from a converted potato shed in a tumbledown cottage deep in rural Devon which he shares with various fish, and sometimes a small Indian frog. He is ably assisted by his lovely wife Corinna, his bulldog/boxer Prudence, his elderly mother-in-law, and a motley collection of social malcontents. Plus.. did we mention the infantile orange cat, and the adventurous kitten?
Posted by Jon Downes at 2:35 PM No comments: 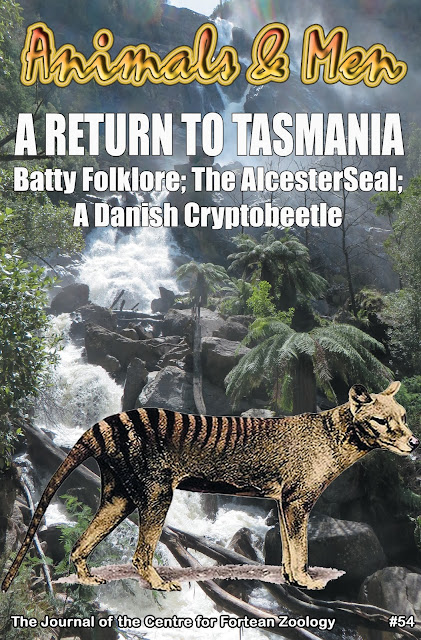 We would like to reassure everybody that Animals & Men #54 is well under way. However, at the beginning of the year, Jon promised a return to a quarterly publication schedule, but he was stupid enough not to realise that putting out a magazine during the run up to the Weird Weekend, or – indeed – in its immediate aftermath, would be nigh on impossible. So, be assured, issue #54 is on its way, but is going to be a little later than we had initially planned. Also be reassured that issue #55 will appear before Christmas.


The new edition of Going Mad to Stay Sane, Andy White’s seminal work on psychotherapy, is out now...

Click here to read the whole article.
Posted by Andrew May at 10:00 AM No comments:

ON THIS DAY IN 1676 - "King Phillip's War" came to an end with the killing of Indian chief King Phillip. The war between the Indians and the Europeans lasted for two years.
And now some more recent news from the CFZ Newsdesk