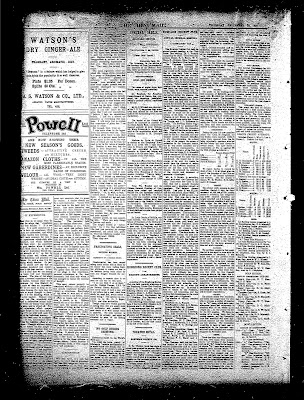 I came across this story in The China Mail of September 30th 1920 or 1929 - unfortunately the type is unclear. I am not sure whether or not it is significant; I never knew seals attacked humans unless provoked. If indeed they were seals. The China Mail, for those of you new to my blogs, was a Hong Kong newspaper.

Consternation has been caused among timid holiday folk at Home by the theory that many bathing fatalities attributed to cramp are due to the bathers having been seized by seals and dragged beneath. According to experts there is no need for any fear on this score.

“I do not think it is at all likely.” Said Mr Oldfield Thomas F.R.S. (of the Natural History Museum) “ I have never heard of such as case, and do not believe a seal, which lives chiefly on small fish, would molest a human being.” This opinion was concurred in by Mr C.T. Regan, F.R.S. and other authorities.

Though seals have violent quarrels at mating time, they are usually timid and inoffensive, and probably the most docile of all wild animals when in captivity. The seal, however, is noted for its curiosity, and might be attracted by some of the bathing costumes now in vogue. (1)

DAN HOLDSWORTH: Not really cryptozoological, not quite anyway


here's a link to some recent research on, of all things, the Black Death plagues of medieval Europe:

The article was linked off this one:

which was linked into by Fortean Times.

The slight cryptozoological link was this: in the past quite a few epidemiologists have claimed (with not very much supporting evidence) that the only reservoir host for the plague bacterium Yersina pestis was the black rat, Rattus rattus, which is a mostly sub-tropical species and is somewhat beyond its northern breeding range in Britain. R. rattus in medieval times acted like it does now, as an imported pest in ports that couldn't quite cope with the climate here and only existed in ports from the population being continually topped up from shipping.

The way the disease was thought to spread was by infected rats transmitting the bacterium to their fleas. Once the rats died the now-starving fleas went looking for anything to bite, some bit people and thus passed on the disease. The problem with this model is that where rat-flea-human transmission goes on, you always see highly obvious mass deaths of rat populations before plague outbreaks; this was never commented on by medieval writers.

The logic goes that because R. rattus wasn't generally present in Britain there would be no reservoir host for Yersina pestis in Britain; therefore it couldn't be the cause of plague; therefore we would have to look for another causitive agent. The favourite for this was an entirely inferred cryptid, an unknown haemorrhagic virus. This is seriously scary because viruses are very difficult to kill; one with a symptomless incubation period of weeks is incredibly scary.

This research, then, is actually very reassuring news: we lose a seriously scary cryptid disease and replace it with a known bacterium that can be treated. We also learn something because that research shows that one strain of Y. pestis spread up to Norway, then down south again. There's no way it could have been ticking over in black rats up there, so there must be another reservoir host (domestic cats, possibly; they are easily infected and cat fleas readily bite people as well) or the disease there acted more slowly and simply spread from person to person.

This won't happen again, if only because people now have access to high quality insecticides and don't tolerate flea infestations, so the transmission chain gets broken. I'm not sure that this qualifies as cryptozoology, but it does qualify as gold-standard debunking of a scare story, replacing a scary myth with something that's still nasty but eminently treatable.

Dan Holdsworth.
Posted by Jon Downes at 11:38 AM No comments:

For many years it has been claimed on the internet that the world's longest cat is a Japanese cat named Shiroi. This particular cat has often been depicted in photoshopped images from Futaba Channel and 4Chan, where it is known as 'long cat', displaying somewhat exaggerated visual length comparisons.

However, it would seem that Long Cat's claim to being the worlds longest domestic cat has been well and truly quashed. A cat named 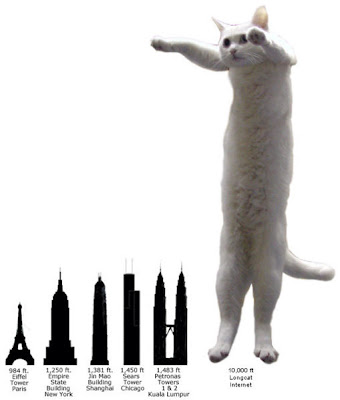 Stewie from the United states of America has recently been confirmed by the Guinness Book of Records as the world's longest domestic cat. Stewie, a Maine coon, measures 1.16 metres from his nose to the tip of his tail, or 48 and a half inches if you still deal in imperial measurements. To put that into a bit of perspective for non-cat-owners my constant companion during animal feeding time at the CFZ, Helios 7, measures only 65 cm, which is 25 and a half inches. I'd guess Number 7 is only a little shorter than average for a domestic cat so Stewie is about twice as big as most cats that you would see walking around. That is quite an amazing animal.
Posted by Jon Downes at 11:26 AM No comments:

Over on the Herpnet email newsgroup Tibor Sos writes: 'I am sending here a picture with a dead Anguis and some small mammal parts. I want some ideas from you about this situation: could be the mammal be part of diet of this Anguis or it is just a coincidence to be there, together. Only information about this situation is what you can see in this picture.'

Personally I haven't a clue. Any ideas 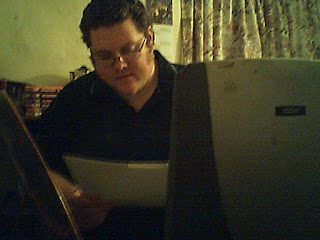 As you know, Oll has been working on the archiving project since early February 2009 and he is now working on a general mish-mash of a section known as `General Forteana`. This 27th collection once again really is a collection of completely uncategoriseable stuff, including UFOs, deadly spiders, the world's worst homing pigeon, a scrying psychiatrist, and a Baltimire woman who is visited by the Blessed Virgin Mary. It doesn't get much better than this. Good stuff.

On this day in 1920 Dr Timothy Leary, the American psychologist and writer who advocated the use of psychedelic drugs, was born.

Mum told off for feeding ducks white bread
Eagle owls bringing up a brood in a pot plant!
Woolly jumpers for baldy birds

Today's going to be pretty busy as everyone at CFZ Towers (except me) is off to the Fortean Times Uncon. I'll be staying here, looking after the menagerie and some of the bloggings... and perhaps most importantly, taking control of the CFZ Playlist! We have music; we have lift-off...

KARL SHUKER WITH A FASCINATING ARTICLE ON ON CHUPACABRAS IMAGERY