New at the Frontiers of Zoology:
http://frontiersofzoology.blogspot.com/2012/04/doing-scales-again.html

Tyler Stone has just sent me the following notice:

Okay, after writing on Titanoceratops for a while, something just hasn't felt right. I guess I don't really think cryptozoology and paleontology are a good fit for each other on the same blog. So all my cryptozoology articles are now going to be posted here: http://cryptoanimals.blogspot.com/
Posted by Jon Downes at 12:26 PM No comments:

TODAY AT THE GONZO BLOG:

Monday morning on the Gonzo Blog and a new, fresh week stretches out in front of us. We have a particularly luscious bushel of postings for you this morning. First up is news about Rick Wakeman's autobiography from its author Dan Wooding:
http://gonzo-multimedia.blogspot.com/2012/04/from-dan-woodings-website-caped.html

The next snippet of musical delightfulness is some exclusaive news about Erik Norlander, with a video clip which will both delight and entertain. This guy really is most dseriously good, and I strongly suggest that you check him out:
http://gonzo-multimedia.blogspot.com/2012/04/erik-norlander-phew-this-guy-is-good.html

Next is our old friend Michael Des Barres, who - together with Rob Ayling, our beloved leader - signs a venerable wall of fame in Hollywood:
http://gonzo-multimedia.blogspot.com/2012/04/michael-des-barres-and-rob-ayling-sign.html

Apparently I got various things in yesterday's post about Merrell Fankhauser wrong, so here is the man himself with the REAL story of one of the most iconic pieces of music of the last century:
http://gonzo-multimedia.blogspot.com/2012/04/merrell-fankhauser-wipe-out-saga.html

And finally, last (but by no means least) the ever entertaining Wally live in Harrogate with a glorious slice of violin led prog which really is peerless. Check it out:
http://gonzo-multimedia.blogspot.com/2012/04/wally-reason-why-at-royal-hall.html

And that's just about it for today. We'll be back tomorrow...
Posted by Jon Downes at 12:20 PM No comments:

On this day in 1889 Charlie Chaplin was born.

Chaplin's Finest hour, this is as true today as it was when he first spoke these words:

Last Sunday, Corinna, my nephew Ross, Prudence and I went to the monthly bird sale at Northam. I was vaguely looking for a parakeet so, of course, I came back with a pair of Bengalese finches. These are particularly interesting birds because they are not actually a species; they are a long-standing domesticated complex introgressive hybrid of several small southeast Asian seedeaters, including - I suspect – several of the munia tribe. There is actually a mystery here, because as far as I know, no-one has ever investigated the actua 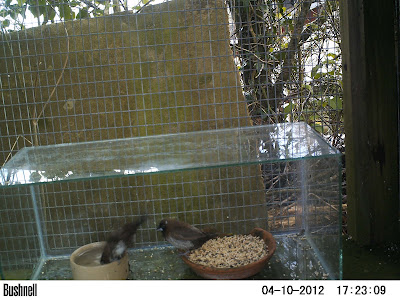 l antecedence of these pretty little birds, despite the fact that they have been domesticated as caged birds for many centuries.

I bought them because they are pretty, because the two aviaries at the bottom of the garden have been empty for over two years since Jerry the jackdaw died in the unseasonably bitter snows of March 2010, and I bought them because – since I was a little boy – I have always liked the sound of oriental finches. Anyway, they were only a fiver for the pair, and I decided to bite the bullet and enter the wonderful world of finch ow 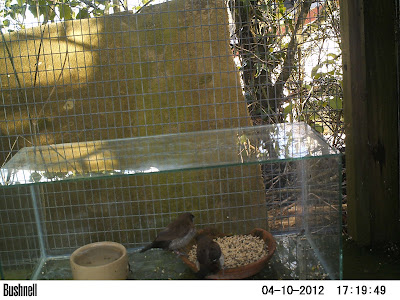 The first night we had them it rained, and sadly the food dish that we had put on the ground was full of water. Graham came up with the idea of putting a glass fish tank on its side on one of the perching shelves so that the birds could both shelter and feed. I was dubious. I thought it would be too complicated a concept for such little brains to handle. But I was wrong, much to my pleasure. As you can see from these trigger camera photographs, it didn’t take long for the little fellows to figure it all out.

Clever birdies!
Posted by Jon Downes at 10:47 AM No comments:

THE LATEST CONTROVERSY TO HIT THE WORLD OF BIGFOOT RESEARCH

Is this latest video a man beast? Or is it a "patchy ungulate"? The link below contains analysis and comment from people on both sides of the fence...

http://www.bigfootlunchclub.com/2012/04/white-bigfoot-or-patchy-ungulate.html
Posted by Jon Downes at 3:27 AM No comments: