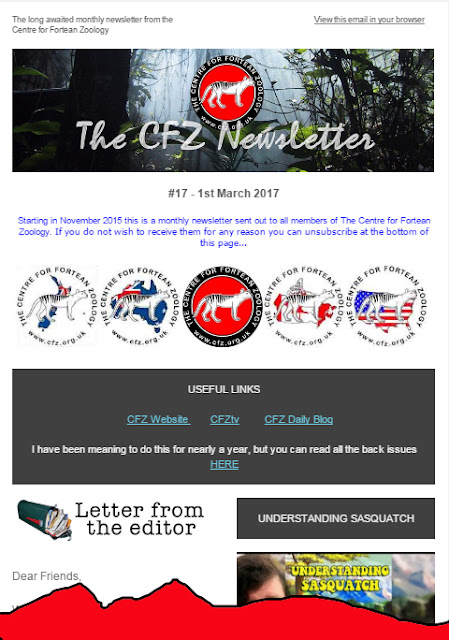 
For those of you not in the know, at the beginning of each month we send out a newsletter to all members of the CFZ. The most recent (which went out this evening) included articles on a ghostly badger, an alternative way of looking at Bigfoot, and a lost tiger, the return of OTT, Expedition Profiles for 2017, Notes and Queries etc.


If you want to view a sample issue click here: http://tinyurl.com/pw7rw9l

Posted by Jon Downes at 4:53 PM No comments:

THE GONZO BLOG DOO-DAH MAN GOES TO THE HOSPITAL

Bigfoot Evidence
The Paranormal Review discusses his most famous video, the Colorado car chase video. Most people find it pretty hokey and think

San Francisco Chronicle
Beyond Bigfoot: Rediscovering 60 years of Sasquatch stories .... Close-up image of still purported to be Bigfoot, from a roll of film left at a San ...
Posted by Jon Downes at 5:30 AM No comments:

ON THIS DAY IN -  1498 - Vasco de Gama landed at what is now Mozambique on his way to India.
And now some more recent news from the CFZ Newsdesk