I note that the BBC are still perpetuating the falsehood that the pine marten is colonising England and Wales from its stronghold in Scotland. It is now known that it never died out in either England or Wales - something I predicted in my 1996 book The Smaller Mystery Carnivores of the Westcountry.
Posted by Jon Downes at 10:23 AM No comments: 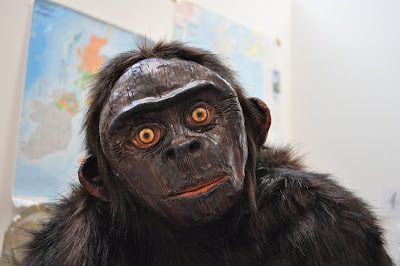 Artist and sculptress Adele Morse is presenting an exhibition of her work based on the orang-pendek and the CFZ’s continuing search for the creature.

Adele’s work will be on display at the Royal Academy of Arts and is open from June 20th to July 1st. She is also displaying her work in Waterstone’s Bookshop in Piccadilly Circus.

Adele writes of her work...

Adele Morse’s work reaches out of the confines of traditional categories of art and attempts to drag the world back into the gallery via a research based practice. An investigation into such subjects as evolution, hierarchical thinking, anthropology, scientific debates/advances and cryptozoology reoccur through this expansive practice. Working with a broad spectrum of experts and enthusiasts she endeavours to take on various roles and positions.
Posted by Jon Downes at 10:20 AM No comments:

We’ve all heard about the antics of Bigfoot, but what about Littlefoot? Certainly, it’s an undeniable fact that many reports emanating from Britain tell of encounters with not just large and lumbering, hairy entities, but with distinctly smaller critters, too. Centuries-old Welsh folklore, for example, tells of the Bwbach, an approximately three foot tall, hair-covered humanoid perceived by the folk of that era as a brownie or nymph.

In Jon's absence, Graham's seated at the Gonzo Mixing Desk!

Being something of a Can fan - my fav album of theirs is "Can Landed" - I found one of these news items of particular interest....

First up, though, a track-by-track review of a Troy Donockley compilation CD:
http://gonzo-multimedia.blogspot.co.uk/2012/06/link-troy-donockley-cd-review.html

Can - three-CD box set of previously unreleased Can material:
http://gonzo-multimedia.blogspot.co.uk/2012/06/canned-surprise.html

Video: Comus performing "Out of the Coma" in Helsinki:
http://gonzo-multimedia.blogspot.co.uk/2012/06/comus-out-of-coma.html

AUBURN: Another slice of live 'wobblecam' - from the "Indian Summer" album:
http://gonzo-multimedia.blogspot.co.uk/2012/06/auburn-another-slice-of-live-wobblecam.html

I'm amused that Liz Lenten applies the term 'wobblecam' to that Auburn video. I wonder what on earth she'd think of some of my mosh-pit footage of Hawkwind! The mind boggles.

Anyway, Cheers for now.
Graham.
Posted by Graham Inglis at 10:06 AM No comments:

Email ThisBlogThis!Share to TwitterShare to FacebookShare to Pinterest
Labels: lepidoptera

On this day in 2002 the asteroid 2002 NM missed hitting the Earth by 121,000 km, about one third of the distance between the Earth and the Moon.
And now the news:
What's the difference between Bruce Willis and Ben Affleck? When they were﻿ both stuck with the task of stopping a meteor from destroying the Earth, one of them cried, and the other saved the world:

http://www.youtube.com/watch?v=9HKZRTRnAIM
Posted by Jon Downes at 9:40 AM No comments: