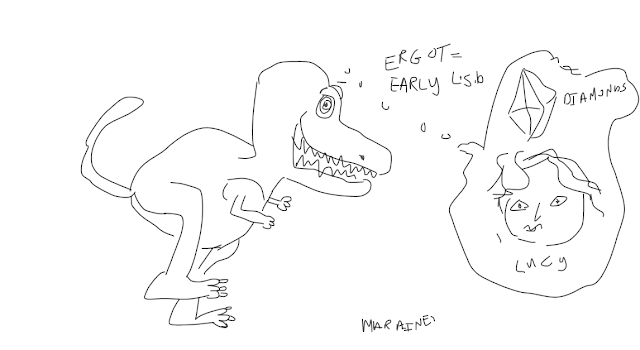 www.gonzomultimedia.co.uk/about.html
As you have probably noticed I have been not in the best of form this week. I was ill on Monday (the usual, and nothing to worry about, although not very pleasant while it lasted). And yesterday my working environment saw a tumultuous, serious, onerous and quite possibly other words ending in 'us' event. Jessica kicked me out of my own office and tidied it up, throwing away several binbags of rubbish and putting things into the proper places. The fact that there aren't proper places for most of the things presented her with an additional problem. This morning it is a joy to sit in my clean and tidy office, which is an emotion that I don't express very often.
Much love and healing vibes, btw, to Mick Abrahams and Jon Anderson. Get well soon chaps.And of course our love and respect to dear Daevid in Australia who is a remarkable and brave man.
THOM THE WORLD POET: The Daily Poem
http://gonzo-multimedia.blogspot.co.uk/2015/02/thom-world-poet-daily-poem_74.html
GONZO TRACK OF THE DAY: The Riddle - Nik Kershaw
http://gonzo-multimedia.blogspot.co.uk/2015/02/gonzo-track-of-day-riddle-nik-kershaw.html
JON ANDERSON HEALTH PROBLEMS
http://gonzo-multimedia.blogspot.co.uk/2015/02/jon-anderson-health-problems.html
SIDONIE JORDAN INTERVIEW (EDITED)
http://gonzo-multimedia.blogspot.co.uk/2015/02/sidonie-jordan-interview-edited.html
Barbara Dickson on famous friends and music therap...
http://gonzo-multimedia.blogspot.co.uk/2015/02/barbara-dickson-on-famous-friends-and.html
The Gonzo Weekly #116
www.gonzoweekly.com
Peter Banks, Sidonie Jordan, Empire, Ty Segall, Robert Wyatt, Jon Anderson, Yes, Hawkwind, and Daevid Allen fans had better look out!
The latest issue of Gonzo Weekly (#116) will soon be available to read at www.gonzoweekly.com, and to download at http://www.gonzoweekly.com/pdf/. It has the lovely Sidonie Jordan, one half of Empire together with the late Peter Banks on the cover and a fascinating interview with her inside. We also have an interview with the author of the new Robert Wyatt biography, and we confirm, that sadly Robert has stopped making music.  We introduce you to the new co host of Strange Fruit, and Doug Harr explains why you all should check out the multi talented Ty Segall, whilst Jon waxes lyrical about the Prog Rock FAQ. We send Jeremy Smith to a desert island. Xtul are on the road to Norwich, and there are shows from Strange Fruit and from M Destiny at Friday Night Progressive, and the titular submarine dwellers are still lost at sea, although I have been assured that they will hit land again soon. There is also a collection of more news, reviews, views, interviews and southern dibblers wearing new shoes (OK, nothing to do with small marsupials in search of snazzy footwear, but I got carried away with things that rhymed with OOOOS) than you can shake a stick at. And the best part is IT's ABSOLUTELY FREE!!!

* The Gonzo Daily is a two way process. If you have any news or want to write for us, please contact me at jon@eclipse.co.uk. If you are an artist and want to showcase your work, or even just say hello please write to me at gonzo@cfz.org.uk. Please copy, paste and spread the word about this magazine as widely as possible. We need people to read us in order to grow, and as soon as it is viable we shall be invading more traditional magaziney areas. Join in the fun, spread the word, and maybe if we all chant loud enough we CAN stop it raining. See you tomorrow...
* The Gonzo Daily is - as the name implies - a daily online magazine (mostly) about artists connected to the Gonzo Multimedia group of companies. But it also has other stuff as and when the editor feels like it. The same team also do a weekly newsletter called - imaginatively - The Gonzo Weekly. Find out about it at this link: www.gonzo-multimedia.blogspot.com/…/all-gonzo-news-wots-fit…
* We should probably mention here, that some of our posts are links to things we have found on the internet that we think are of interest. We are not responsible for spelling or factual errors in other people's websites. Honest guv!
* Jon Downes, the Editor of all these ventures (and several others) is an old hippy of 55 who - together with an infantile orange cat named after a song by Frank Zappa puts it all together from a converted potato shed in a tumbledown cottage deep in rural Devon which he shares with various fish, and sometimes a small Indian frog. He is ably assisted by his lovely wife Corinna, his bulldog/boxer Prudence, his elderly mother-in-law, and a motley collection of social malcontents. Plus.. did we mention the infantile orange cat?
Posted by Jon Downes at 2:02 PM No comments:

Posted by Corinna at 1:05 PM No comments:

"Thom the World poet is an old mate of mine from way back in my history. Even pre-dating Voiceprint, when I was running "Otter Songs" and Tom's poetry tapes and guest appearances with Daevid Allen, Gilli Smyth Mother Gong are well known and highly regarded. It just felt right to include a daily poem from Thom on our Gonzo blog and when I approached him to do so, he replied with in seconds!!! Thom is a great talent and just wants to spread poetry, light and positive energy across the globe. If we at Gonzo can help him do that - why not? why not indeed!!" (The wondrous poetpic is by Jack McCabe, who I hope forgives me for scribbling all over it with Photoshop)

AS OLDE AUSTIN EVICTS ITSELF

HIGH RENTS/HIGH RATES OF EVICTION
Single stories give rise to high rise
with inadequate street parking
Flimsy slums of the future compete
with traditional homes with high price tags
Even when the housing stock is full
Rents still remain on the rise
Do not be poor or homeless in Austin!
Inadequate shelters and police harassment
mean it is illegal to sleep in public-
even under bridges,in parks,at bus shelters
The myth of Austin is just that-low paid work
means many jobs the necessity.Even the rich
find costs too high for effective investment.
Boom and bust the pattern over decades-
lucky the Lounge to find a new spot
Until rents rise and another Austin
nostalgic music memory is made..

Horseshoe Lounge Announces New Location - 365 Things to Do in Austin, TX
The iconic Horseshoe Lounge will close its doors this weekend, marking the end of a 50-year tradition on South Lamar. The ‘Shoe,
365thingsaustin.com|By Kristy Owen
Posted by Jon Downes at 12:31 PM No comments:

People Will Try Anything, Including Fishing For Bigfoot (Video)

Before It's News
When it comes to seeking out bigfoot, anything is worth giving a try. To Robert Dodson in Texas, he'll even try fishing for them. His preferred bait of ...

Does Bigfoot live in Scotland? Some people seem to think so

STV Edinburgh
The Edinburgh Evening News reports that a Scottish woman has joined the British Bigfoot Research team to track down the creature she believes she ...

Game Cameras and Bigfoot, This Is What's Probably Happening Out There

Bigfoot Evidence
This is hilarious! Bigfooter Beth Patterson recently shared a comic by Robert Swain about game cameras and Bigfoot. Could this explain the recent ...
Posted by Jon Downes at 12:26 PM No comments:

Anna Shearer from Marlow in Buckinghamshire, was out playing with her dogs when she spotted the mysterious creature up a tree. Believing it to be one of her pets who had somehow got stuck, she moved in for a closer look only to realise that the creature was a lot more exotic.

Capturing the small mammal on video, Shearer contacted the RSPCA for advice.

IS BIGFOOT POSSIBLY AN ALIEN ENTITY? By Dr.Franklin Ruehl  (Originally published in the Huffington Post.  Re-posted here by permission of the author, with our deepest thanks.)

Rather than being a missing link between man and the apes, Bigfoot ,may possibly be an alien entity. This intriguing possibility is derived from evidence in several solid UFO cases.

The earliest clues date back to 1888, when a cattleman described an encounter with friendly Indians in Humboldt County, California. They led him to a cave where he saw a hefty humanoid creature covered in long, shiny black hair, with no neck, sitting cross-legged.

ON THIS DAY IN 1858 - A French girl, Bernadette Soubirous, claimed to have seen a vision of the Virgin Mary near Lourdes.

AND TO WHISTLE WHILE YOU WORK... (Music that may have some relevance to items also on this page, or may just reflect my mood on the day)
Posted by Jon Downes at 1:27 AM No comments: