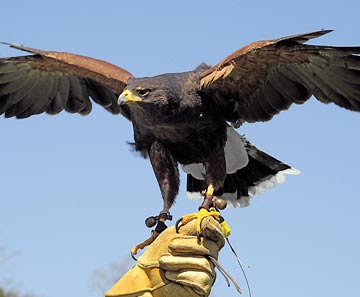 Yesterday morning I was not feeling so good, so I came downstairs late. Corinna and Prudence had already breakfasted and were taking their morning consitutional.


A few minutes later they walked in through the gate, paused a little, and then Corinna ushered Prudence in through my study door. In a stage whisper Corinna told me that there was a bird of prey in the garden, and it appeared to be stuck.


I grabbed a large net that happened to be on top of the printer, and - net in one hand, walking stick in the other- I followed Corinna into the garden. 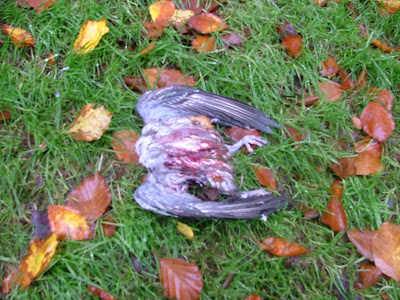 It was obviously an escapee from captivity because it was wearing jesses, but it turned out not to be stuck at all. It flew off, giving me and my butterfly net a disdainful glance over its shoulder as it did so.


However, it left a dead pigeon - its half eaten breakfast - as a memento mori of its visit. And that, basically, was it.


I telephoned Kaye to make sure that Ross's bird had not escaped (it hadn't), sent Oliver out into the garden with my camera to document the evidence, and then sat down to write this story.

RICHARD FREEMAN: Daemons of the Dreamtime #6

NINYA
These are men made of ice, with icicles for beards. They live in deep caverns beneath the desert. On winter evenings they emerge, and cause cold and frost to fall upon the land. As sunrise approaches they rush back to their caves before they can melt, and this rapid movement creates the icy winds of desert mornings. If ice is found out of season it means that the Ninya are angry. They can freeze lakes and rivers. The Ninya are the villains of Patricia Wrightson’s book The Ice is Coming.
Posted by Jon Downes at 12:27 PM No comments:

Just over a week ago, myself and good friend – and co-author with me on Monsters of Texas – Ken Gerhard headed north to Oklahoma, where we were booked to lecture at the first (of hopefully many) Boggy Depot Bigfoot Conference. The brainchild of a man named Mike Hall, the gig was designed to raise funds for two very worthwhile programs: the Children’s Hospital Foundation and the Children’s Miracle Network.

We arrived in the town of Atoka around 6.00 p.m., checked into our lodgings, and then made our way to the Boggy Depot State Park, where the audience was due to be treated to two cult-classic, horror/monster movies of the 1970s: The Legend of Boggy Creek and The Creature from Black Lake. As we pulled up in the park, with our vehicle’s speakers thumping out a fine dose of Rob Zombie, I could already see that the audience was beginning to build up, and the rain, which had been pummeling the area for hours, was starting to lessen.

Vermont: The Legend of the Albino Moose
http://www.burlingtonfreepress.com/article/20101031/NEWS02/10310324/The-Legend-of-the-Albino-Moose

OLL LEWIS: Another elusive creature from the Garo Hills

Whilst waiting for news from the India expedition,
Oliver takes a look at another elusive creature from the Garo Hills.

Because meerkats are mentioned in the drongo story it gives me an excuse to post one of my favourite viral things:
http://www.youtube.com/watch?v=iKsSOEto3B0
Posted by Jon Downes at 12:15 PM No comments: