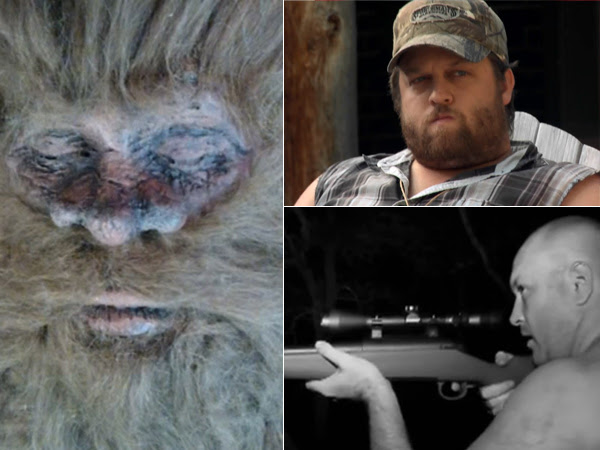 Two men who claim to have shot and killed Bigfoot. Rick Dyer (bottom right) on camera supposedly shooting the one seen at left in San Antonio in September 2012. Justin Smeja, who shot two in California in 2010, telling his story on Spike TV's "$10 Million Bigfoot Bounty,"


Should killing Bigfoot be a crime?

Although it is in a couple of Washington counties, that's not the case in Texas, where an 8-foot shaggy beast was supposedly bagged in some San Antonio woods by Sasquatch hunter Rick Dyer.

“You don’t need a hunting license to kill something that doesn’t exist,” said Mike Cox, a spokesman for the Texas Parks and Wildlife Department.


Dyer, though, has commented plenty, after a recent release of photos snared attention across the media. He said he nailed Walmart pork ribs to a tree to lure a couple of Sasquatch, one of which he shot and killed in September 2012. He promises that scientific proof, including DNA results and autopsy video, will finally be unveiled on Feb. 9, at a news conference with a Washington university.


Then the plan is to take the taxidermied body on a national tour.

UP NEXT
An Intimate Look At Tigers
‹›
Besides “anywhere he wants,” where does a 1,200-ape sit down for diner? The extinct 10-foot tall Gigantopithecus probably found a seat near the bamboo salad bars of Southeast Asia’s forests from approximately 9 million to 300,000 years ago.
However, that bamboo buffet may have disappeared as the Tibetan Plateau rose and ushered in a cooler climate. Without bamboo, the apes may have turned to sugary fruits that rotted their teeth, reported New Scientist.
Near the end of apes’ time on Earth, the animals’ now-fossilized teeth bore deep erosion and potential signs of decay. This may mean they ate increased amounts of acidic, sugary fruit as the bamboo dwindled, the lead author of recent study in Quaternary International, Yingqi Zhang of the Chinese Academy of Sciences, told New Scientist.
Photos: 10 Reasons Why Bigfoot’s a Bust
Zhang based his dental diagnosis of  Gigantopithecus’ demise on 17 teeth recently excavated from Hejiang Cave in China. The teeth were found along with fossils from rhinos, pandas, tapirs, hyenas, colobine monkeys, tigers and other animals.
Read on...
Posted by Jon Downes at 1:40 PM No comments: 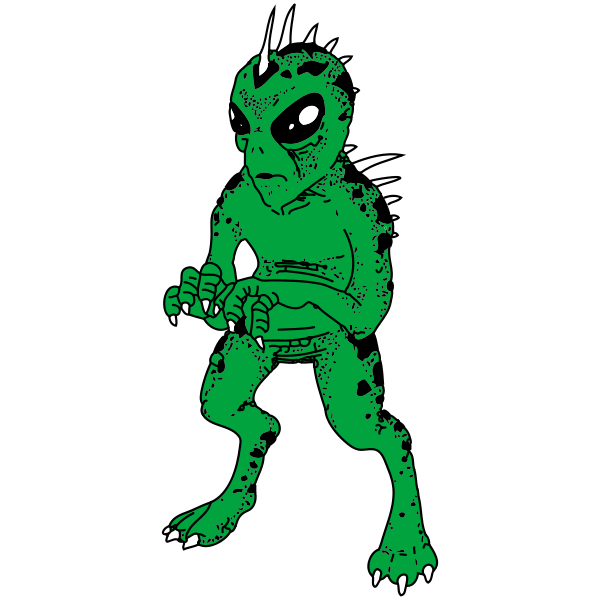 THE GONZO BLOG DOO-DAH MAN IS IN FINE FETTLE

www.gonzomultimedia.co.uk/about.html
An ex-girlfriend of mine always said that you could tell what sort of mood I was in by the sort of music I was listening to. Today I am listening to 'Sexual Harassment in the Workplace' from Frank Zappa's Guitar album (1988). What that says about my mental health I have no idea, but it was a full moon yesterday!
Yesterday evening was full of drama! Lilith Tinkerbell, the little black kitten who only took her first faltering steps outside last week, escaped. Sometime in the mid afternoon she got out, and we couldn't find her anywhere. As anyone who has ever visited my house will know, there is stuff everywhere - tanks of exotic fish and other creatures, guitars, books, CDs, zoological specimens, and general tat that we have picked up on our travels - so there are plenty of places for a little pussy cat to hide. So we weren't that worried...at first. But as the evening progressed we got more and more worried, and by the time we went to bed, Corinna and I were verging on distraught. Then, just after we had switched the bedroom light out, we heard a plaintive squeaking noise from outside, and Corinna rushed downstairs only to return a few minutes later with a little black kitten who was looking rather pleased with herself, and none the worse for her adventure.
Today I shall be putting this weekend's issue of the Gonzo Weekly together, and talking to legendary drumdude Twink. Shosh and Gavin are going back to the Midlands, and normal service will hopefully be resumed. Slainte...

*  Jon Downes, the editor of all these ventures (and several others), is an old hippy of 54 who - together with his orange cat (who is currently on sick leave in Staffordshire) and two very small kittens (one of whom is also orange) - puts it all together from a converted potato shed in a tumbledown cottage deep in rural Devon, which he shares with various fish and sometimes a small Indian frog. He is ably assisted by his lovely wife Corinna, his bulldog/boxer Prudence, his elderly mother-in-law and a motley collection of social malcontents. Plus...did we mention the orange cat?
Posted by Jon Downes at 12:03 PM No comments:

On this day in 1931 the actor James Earl Jones was born. Jones is best known for providing the voice for Darth Vader in the Star Wars films, also voicing Mufassa in The Lion King and for playing the king in Coming to America.

This would have been a much cooler way to announce the birth of Prince George than some crummy easel in a glorified car-park last year, they have a balcony in front of Buckingham Palace, why not use it:

http://www.youtube.com/watch?v=8zLx_JtcQVI
Posted by Jon Downes at 10:02 AM No comments: