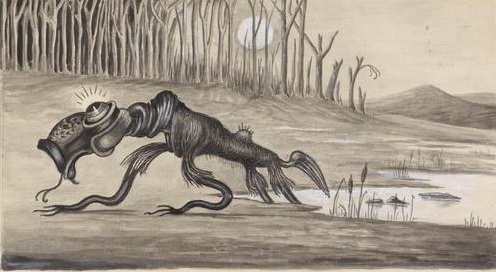 Squatchable
Recollection of a roadside sighting of a white Bigfoot near Blount Springs. I was driving a VW bus so I had a good view of my surroundings.

Bigfoot Research News
Ohio Bigfoot Hunter Finds Something Strange. Ohio Bigofot hunter Tim Stover is one of busiest Bigfooters in Ohio. Busy with his life, and busy in the ...
Posted by Jon Downes at 11:00 AM No comments:

VIDEO: Is Shipley man's Loch Ness monster footage the real deal, or just an eel?
Bradford Telegraph and Argus
A LOCH Ness monster hunter from Shipley believes he could finally have helped solve the mystery of what really lurks beneath the water. A computer ...

ON THIS DAY IN 1793 - King Louis XVI was tried by the French Convention, found guilty of treason and sentenced to the guillotine.
And now some more recent news from the CFZ Newsdesk