The other night Graham was in bed, and was awoken by a telephone call. "There are some strange footprints in my garden" said a female voice. Graham gave her my email address and went back to sleep. The next day these arrived together with this message:

Hi Jon
I spoke to one of your colleagues tonight and wanted to send you these pics. As you can in some of the picture the size difference between my footprints and these. I hope you can give me some inside on these.

Thanks
Harriet and Amy

As you will all know by now, I am notoriously bad at identifying footprints. So it is over to you lot! 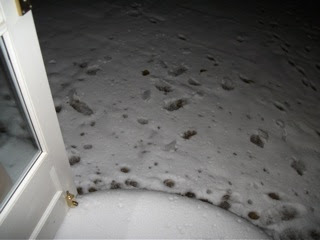 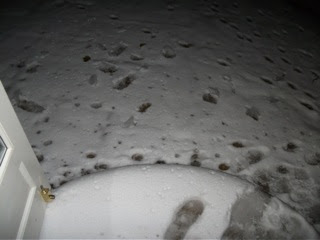 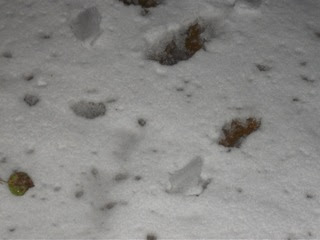 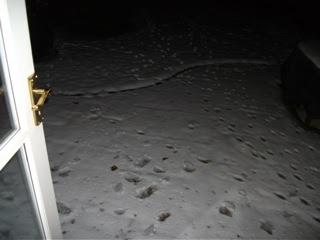 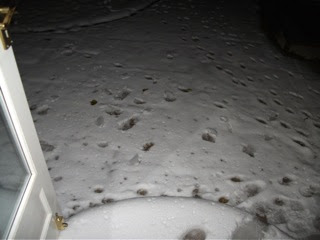 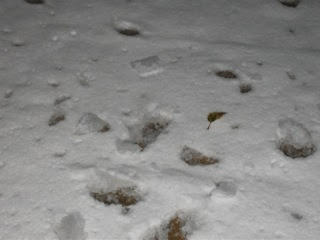 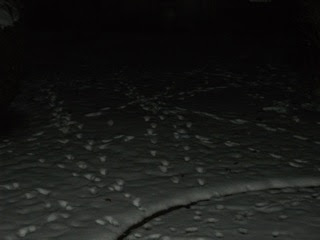 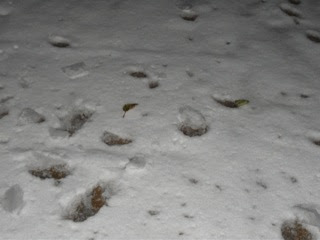 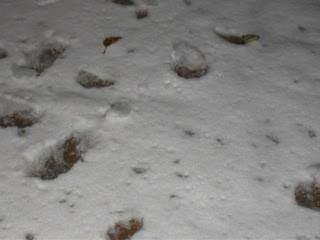 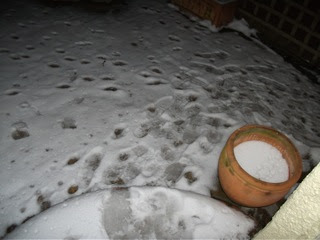 Posted by Jon Downes at 8:09 AM No comments:

Man eating plants- Fact, Folklore or Fantasy?
A German traveller in the 1880s called Karl Lache (Spelling may not be accurate as different versions spell his name Carle etc) wrote to the Polish Doctor, Omelius Fredlowski, describing a human sacrifice he had seen in Madagascar , in which a woman had been devoured by a tree. His letter said that the Mkodos of Madagascar lived in caves ,were small in stature and sacrificed their fellow tribes people to the tree. The full text of his letter is reproduced in Searching for Hidden Animals by Roy P Mackal (1983 Cadogan Books London).Lache called the tree “Crinoida”. He described it as a truncated cone with right hooked or horned leaves That hung to the ground like hinged doors.The tree had a receptacle which contained a clear sweet treacly liquid and from this hung tendrils. Lache said he had witnessed the Mkodos take a woman to the tree,where she drank the liquid and the tree surrounded her with its tendrils and ate her.Ten days later all that remained was her skull.


The account was published in newspapers and magazines along with lurid illustrations and was purportedly published in a scientific journal. I could find records of the other articles but not a scientific journal.
Chase Salmon Osborn of the USA travelled all over Madagascar after reading these accounts to look for the tree. He published a book about his travels in 1924.He did not find the tree but heard lots of folktales he said about it from both indigenous peoples and missionaries.


I feel that the man eating tree is more fantasy than fact .The strangest thing I find about it is that the tree contains(when you read the account) so many elements of other carnivorous smaller plants which seems unlikely. You can understand it having two but not so many. Surely that would be evolution gone wild? Why would it need the receptacle element and tendrils and leaves? If the receptacle is on top of the tree where creatures would fall in, why would it also need the leaves? We do have lots of smaller plants such as pitcher plants. Venus fly trap, sticky sundew that attract and digest insects and more recently a larger plant was discovered that could digest a rat, but a plant that could digest a human would have to be very large and surely would be seen by many people? Sadly I think this is one we confine to old Tarzan films ,more myth than reality.
Posted by Jon Downes at 8:05 AM 3 comments:

THE NEW HAIR SAMPLES FROM LARS 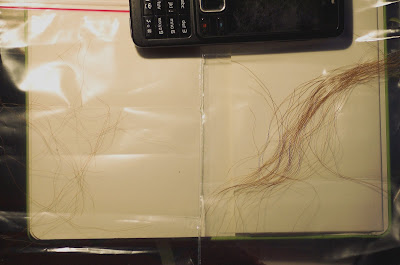 LARS WRITES: Please make sure everybody understands, that I haven't analyzed the hairs in any way - they might be orangutang hairs or something else interely. They were sent to me by a Danish guy who lived and worked as a tour guide in Indonesia for several years in the 1990's.


The hairs were given to him by an Indonesian friend, who claimed they were from an OP that were seen near the village where he grown up in eastern Sumatra. He just kept them as a fun souvenir, and had almost forgotten about them, when he read something on the web, that led him to the CFZ blog and my name. To quote: "You can keep them if you like - I have no idea if they have any scientific value, but let me know what you find."
Posted by Jon Downes at 8:02 AM 1 comment:

A fortnight or so back I said that I was going to do a weekly round up of the news stories from the CFZ Australia blog. Stuff got in the way, and my arteries hardened a little more, and I basically didn't. This morning, having been kicked out of bed at a ridiculously early hour by a snoring bulldog, I came downstairs to play a game of Command and Conquer and do the blog. It was only then that I remembered. So I went in search of the CFZ Australia site and nearly had a fit!

I had not realised (despite reading it each day) quite what a volume of information dear Mike and Rebecca put out. The following are JUST the stories since I last posted on November 21st (excepting the ones when they very kindly linked to a story on the main blog that they decided was of particular importance). Strewth!

A New Zealand man is hoping someone will return the alleged Pangboche Yeti artifacts:

A new book on Carl Akeley, taxidermist and conservationist:

On this day on in 521 BC St Columba was born. Columba is of course notable to cryptozoologists because of his encounter with a monster in the River Ness which has been claimed by some as the first recorded encounter with the Loch Ness Monster.
And now, the news:

Seal clubbing is barbaric, but what would happen if one seal were to get it's own back? Well wonder no more:
http://www.youtube.com/watch?v=llks4FaEtE0
Posted by Jon Downes at 7:30 AM 1 comment: