The Editorial Staff at Herpetological Conservation and Biology is pleased to announce the release of Volume 5(2), the second issue for 2010. Volume 5 is dedicated to the late Henry S. Fitch (1909 - 2009). Topics include the ecology, life history, conservation, and management of amphibians and reptiles. Besides our regular and diverse offerings of a global perspective on herpetology, we are pleased to include the results from the Symposium of the 6th World Congress of Herpetology entitled "Reproduction in Reptiles: from Genes to Ecology." This issue is open access and freely available to anyone interested: http://www.herpconbio.org. The Editorial Staff thanks you for your continued support, and encourages your continued use and participation in the success of Herpetological Conservation and Biology.
Sincerely, Rob Lovich, PhD.
Communications Editor
Herpetological Conservation and Biology
rlovich@herpconbio.org


This issue is open access and freely available to anyone interested: http://www.herpconbio.org/.
Posted by Jon Downes at 6:32 PM No comments: 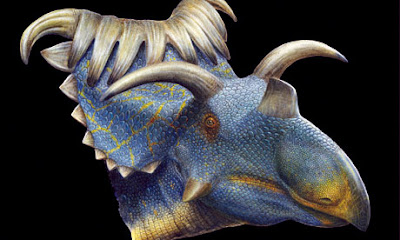 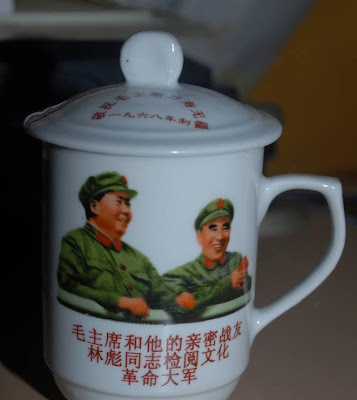 She usually brings me a souvenir in the form of a Buddha, which is my preference. I have many little statues in a variety of odd forms from her past travels, as well as my own. This time she brought me a cheap-ass decaled knock off Mao Mug, which I was very delighted to receive.

Apparently the old school Commy gift items have become more rare, so I was more than happy to see it. Tomorrow I will happily drink my coffee from this cheaply made mug (hoping the glaze is not lead-based) and think of Hong Kong fondly.

What does it say?

My best guess is, “Stupid tourist bought this piece of crap”
Posted by Jon Downes at 11:55 AM 1 comment:

OH, DIDN'T I MENTION IT?

The music, (and, indeed the title) from yesterday's piece about the swarm of `daddy longlegses` was from the rather excellent Pete Brown, and his band Piblokto who were active in ther aerly 1970s, following the break-up of his earlier band The Battered Ornaments.

And what has this to do with cryptozoology? You may well ask...

Steve Ignorant is currently on tour playing Crass songs 1977-1984, and I am watching what I can on YouTube. They are gloriously life-affirming and I am so tempted to put some on here, but they are still too tourettes-like for what is essentially a family magazine, and we wouldn't want to be accused of encouraging kiddies to swear would we?
Posted by Jon Downes at 11:28 AM No comments:

It gives me great pleasure to announce that one of the initiatives that I announced in my Keynote Speech at the Weird Weekend has now come to pass. As of last thursday, The Centre for Fortean Zoology, CFZ Press, and The Amateur Naturalist plus all the other things we do within the realms of both Cryptozoology and Natural History are administered by a Company Limited by Guarantee called "CFZ Natural History Ltd".


A Company Limited by Guarantee is basically a limited company set up not to make a profit, and is the next step to being a charity. There are two Directors: Graham and myself, and as - by law - neither director can benefit financially from the activities of the company, I hope that this will put to bed, once and for all, any accusations of financial impropriety on mine, or Graham's (or indeed Corinna's, because as wife of a Director, she cannot benefit financially either) part. Accounts will be available, as with any other company, from Companies House.
Posted by Jon Downes at 11:09 AM 1 comment:

On the 17th August I was happy to announce that Danish Zoologist Lars Thomas had examined hair samples found in Huddisford Woods near Woolsery, and pronounced them to be leopard. I offered the hairs (which were found by Lars, Jon McGowan and a team known as the Four-Teans) to any research group or academic institution who wanted to try and verify Lars's findings. The first person to contact me was Dr Ross Barnett from Durham University who has done DNA analysis on them, and has confirmed that they are Pantherine, probably leopard. He is carrying out further tests to establish the species and subspecies for certain and a full announcement will be made then.
Posted by Jon Downes at 11:08 AM 1 comment:

On this day in 1947 Meatloaf was born:
http://www.youtube.com/watch?v=Q9hLcRU5wE4
And now, the news:

I'm glad someone 'sole'-d him out to the police.
Posted by Jon Downes at 11:07 AM No comments: