Richard Muirhead sent the above link.

I remember seeing them in the flame trees outside what was then the Colonial Secretariat when my Dad worked there in the late 1960s. But I had no idea until today that they were anything but an invasive species, and certainly no idea that this colony was of conservation importance to the species as a whole.

I HAVE JUST RECEIVED THIS MESSAGE FROM 'TROPICAL FISH-FINDER'

A very rare Venezuelan black wolf fish Hoplias curupira is currently available at Wildwoods. They only have one example of this species available and given the rarity we would recommend acting quickly if you would like to buy this fish. The fish is available to buy online via their Tropicalfish2yourdoor shop on Tropicalfishfinder along with a huge variety of other rare and oddball species.

Isn't this a magnificent creature? But there is only one of them and it is over £130. Pity :(

http://frontiersofzoology.blogspot.com/2012/01/more-on-thunderbirds.html
Posted by Jon Downes at 1:43 PM No comments:

On this day in 1897 Elva Zona Heaster was found murdered. Her murder trial made legal history in the united states as the first trial where ‘testimony from a ghost’ was taken into account.

A dramatic recreation of the Heaster murder:
http://www.youtube.com/watch?v=Ke1dqOv9Sos
Posted by Jon Downes at 12:42 PM No comments:

When I was a boy all the lanes around Huddisford Woods had ditches at the side, and all of these ditches were tiny ecosystems teeming with life.

For years I would patrol these little ponds looking for water beetles, dragonfly larvae and tadpoles, and it was one of the things that I was looking forward to doing again when I came back to North Devon seven years ago.

But to my disappointment the ditches were all either dried up or hopelessly polluted. I suppose that I shouldn't be surprised really. The water table has dropped, most of the marshes have been drained to create usable farmland and there are many more cars on the roads than there used to be.

When I was a boy I cycled all around the area but it just wouldn't be safe now. There are just too many cars on the roads. I remember back in 1972 a schoolpal of mine deciding to start a new hobby of collecting car license plate numbers. He was overjoyed to have written down 21 different ones passing through Woolsery in a single day! I thought then that this was a singularly pointless excercise, but I certainly wouldn't attempt it now. But if I did, I expect that we would amass well over a thousand in the same length of time.

Now, where there were once dozens of little self-contained ecosystems, there is only one left. 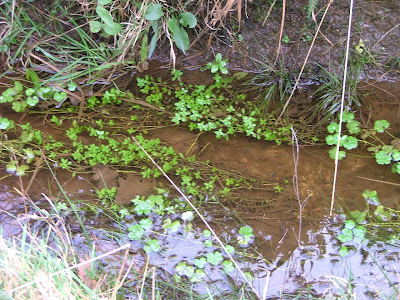 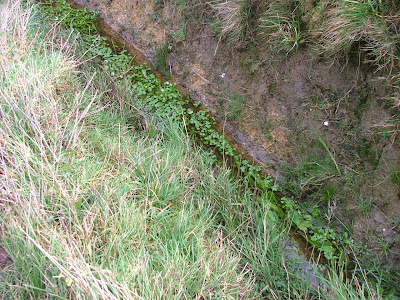 Corinna and I have set ourselves a little task for 2012. We are going to follow the progress of this one remaining mini stream throughout the year, and try and make a record of its inhabitants through the seasons. 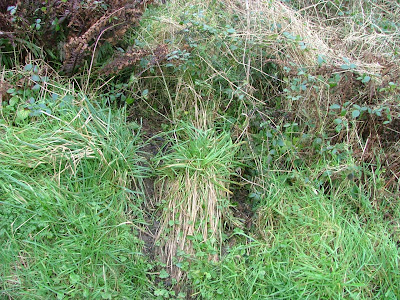 Now, at the risk of sounding like Lloyd Grossman (who severely irritates me - but that is another story), what animal would use this obviously well worn trackway up the bank and into the hedge?

Well, I know that we are talking about Huddisford Woods and that since we got DNA from hairs found there, there seems no doubt that at least one big cat inhabits the area, but this trackway was made by something smaller - probably a fox. 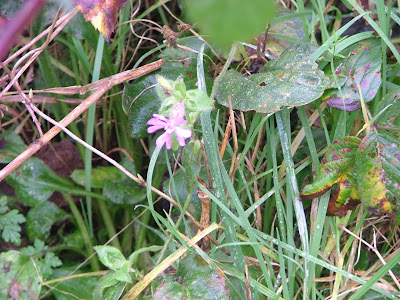 Finally, look at this. As we have been noting in recent posts, the world really does seem to have been turned upside down. This red campion is supposed to flower between May and October, but was photographed at Huddisford yesterday afternoon. Is it a late straggler from last October? Or is it a very early flower that thinks it is May? Either way, it should not be flowering in January, and is an early sign that all is far from right!

Today, only 88 constellations in the night sky are formally recognised by the International Astronomical Union (IAU), but many additional ones were once described and named too. One of these was Felis, the Cat, which was originally designated in 1799 by French astronomer Joseph Jérôme de Lalande, a noted cat-lover who had lamented the domestic cat's absence in a sky populated by no less than three different domestic dog constellations (Canis Major, Canis Minor, and Canes Venatici), as well as three wild cats (Leo, Leo Minor, and Lynx). And so Felis, situated between the constellations of Antlia (the Air Pump) and Hydra (the Water Snake), was duly added to the list, becoming the thirty-fourth animal constellation (albeit a rather small one).

New on Cedar and Willow, touching on the post-apocalyptic period again. A couple of good jokes in there if you go looking for them.

P.S. If you think there will be no traffic on it, you could mention it includes Tina Louise photos this time.