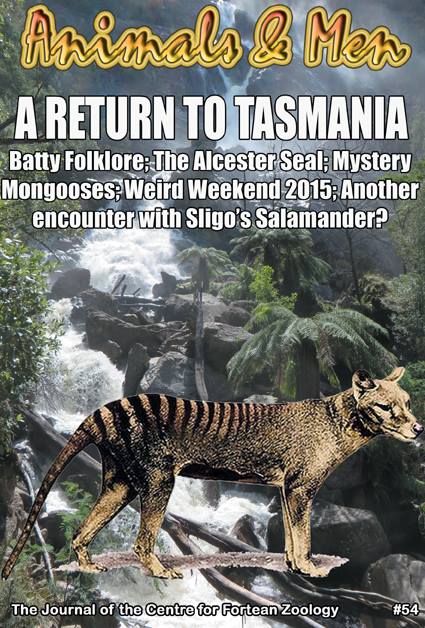 The latest free edition of A&M has been uploaded and will be available on the
CFZ Publications page very soon.
Posted by Jon Downes at 12:13 PM No comments:

BBC News
A hit US TV show will feature a Loch Ness Monster-like creature, its co-creators have revealed. Grimm is centred around a Portland police detective's ...

Was The Albert Ostman Bigfoot Kidnap Story a Hoax? A Poll Says No (Video)
Before It's News
We've always been fascinated by the Albert Ostman story, but this is the first time that we've heard anything about it being a hoax. Greg W. sent us a ...

Have US Military Encountered Bigfoot? Government Cover – Up
Sasquatch Chronicles
Comments are closed. Bigfoot Hotspot Radio · Like PageLiked. 6k likes ... Some in the bigfoot community feel that Sasquatch are the Nephilim. I did a.
Posted by Jon Downes at 11:49 AM No comments:

www.gonzomultimedia.co.uk/about.html
So, Squeaky Biscuit has her inoculations this morning, which are her first right of passage towards adulthood. This is probably a good thing, because she has been making determined efforts to escape into the wide world for the past few days, and it is only a matter of time before she succeeds. In two weeks time she has the second dose, and she gets the snip where upon she will be able to venture outside in safety and we will not be at risk of having any more bloody kittens coming in and disrupting my life, apart from that we are off to see Barbara Dickson tomorrow night and I very much look forward to a weekend of hiding my head under the pillow and refusing to talk to anyone.
Oooh, I nearly forgot. This afternoon I am interviewing the legendary Thom the World Poet. How on earth could I have forgotten that?
THOM THE WORLD POET: The Daily Poem
http://gonzo-multimedia.blogspot.co.uk/2015/09/thom-world-poet-daily-poem_10.html
Steve Hackett Ready to Wolflight Up Liverpool & Sa...
http://gonzo-multimedia.blogspot.co.uk/2015/09/steve-hackett-ready-to-wolflight-up.html
THE GONZO TRACK OF THE DAY: Barbara Dickson - Cara...
http://gonzo-multimedia.blogspot.co.uk/2015/09/the-gonzo-track-of-day-barbara-dickson.html
A Truly RAD Premiere: Michael Des Barres Remembers...
http://gonzo-multimedia.blogspot.co.uk/2015/09/a-truly-rad-premiere-michael-des-barres.html
RAINMAN RECORDS Launches 'British Live Performance...
http://gonzo-multimedia.blogspot.co.uk/2015/09/rainman-records-launches-british-live.html
Gonzo Weekly #146
www.gonzoweekly.com
Emerson, Lake & Palmer, Bee and Flower, The Wombats, Joy Division, Fruits de Mer, Insect Ark, Pink Fairies John Martyn, Ringo Starr, David Bowie, Roy Weard, Dogwatch, That Legendary Wooden Lion, Hawkwind, Jon Anderson, and Yes fans had better look out!
The latest issue of Gonzo Weekly (#146) is available to read at www.gonzoweekly.com, and to download at http://www.gonzoweekly.com/pdf/. It has Dana Schechter from Bee and Flower  on the front cover together with an interview with her inside, Doug looks at ELP, Lee dances with The Wombats, Jon muses about Fruits de Mer Records and reviews a book about Ringo Starr, John looks at the legacy of the English Underground on YouTube including music by John Martyn and the Pink Fairies. Thom waxes all poetical like, whilst the legendary Roy Weard continues his regular column. And there is a radio show from M Destiny at Friday Night Progressive, and the second of four Strange Harvest radio specials from the folk wot bring you Strange Fruit, and there is the latest episode of Canterbury Sans Frontières featuring Gong and Matching Mole. There is also a collection of more news, reviews, views, interviews and water opossums with something to lose (OK, nothing to do with small marsupials planning to pray to St Anthony of Padua for an intercession, but I got carried away with things that rhymed with OOOOS) than you can shake a stick at. And the best part is IT's ABSOLUTELY FREE!!!
This issue features:
Fruits de Mer, The Beach Boys, Miley Cyrus, Meat Loaf, Prince, Alan Lomax, Brinsley Schwarz, Mega Dodo, Galahad, Lana del Rey, Barbara Dickson, Strange Fruit, Friday Night Progressive, Canterbury Sans Frontieres, Owens Boomer Castleman, Joy Beverley, Wes Craven, Rick Wakeman, Hugh Hopper, The Pirates, Ducks Deluxe, The Pirates, Wilko Johnson, Dr. John, Johnny Winter & Uncle John Turner,  Billy Cobham, Brand x, Pete Sears, Frank Zappa, Bee and Flower, Dana Schechter, Emerson, Lake & Palmer, Lee Walker, The Wombats, John Brodie-Good, Caravan, Hawkwind, Gong, Pink Fairies, John Martyn, Roy Weard, Lemmy, Yes, Ringo Starr, John Lennon, Bring me the Horizon, David Bowie, Neil Nixon, Les Baxter, Midvinterblot
Read the previous few issues of Gonzo Weekly:
Issue 144 (Percy Jones cover)
http://www.flipsnack.com/9FE5CEE9E8C/gonzo143.html
Issue 143 (Billy Sherwood cover)
http://www.flipsnack.com/9FE5CEE9E8C/gonzo143.html
Issue 142 (Daevid Allen and Spirits Burning cover)
http://www.flipsnack.com/9FE5CEE9E8C/gonzo142.html
Issue 141 (Rick Wakeman cover)
http://www.flipsnack.com/9FE5CEE9E8C/gonzo141.html
Issue 140 (Jaki Windmill cover)
http://www.flipsnack.com/9FE5CEE9E8C/gonzo140.html
Issue 139 (Raz cover)
http://www.flipsnack.com/9FE5CEE9E8C/gonzo139.html
Issue 138 (Galahad cover)
http://www.flipsnack.com/9FE5CEE9E8C/gonzo138.html
Issue 137 (Chris Squire cover)
http://www.flipsnack.com/9FE5CEE9E8C/gonzo137.html
Issue 136 (Neil Nixon cover)
http://www.flipsnack.com/9FE5CEE9E8C/gonzo136.html
Issue 135 (FNP cover)
http://www.flipsnack.com/9FE5CEE9E8C/gonzo135.html
All issues from #70 can be downloaded at www.gonzoweekly.com if you prefer. If you have problems downloading, just email me and I will add you to the Gonzo Weekly dropbox. The first 69 issues are archived there as well. Information is power chaps, we have to share it!
You can download the magazine in pdf form HERE:
http://www.gonzoweekly.com/pdf/
* The Gonzo Daily is a two way process. If you have any news or want to write for us, please contact me at jon@eclipse.co.uk. If you are an artist and want to showcase your work, or even just say hello please write to me at gonzo@cfz.org.uk. Please copy, paste and spread the word about this magazine as widely as possible. We need people to read us in order to grow, and as soon as it is viable we shall be invading more traditional magaziney areas. Join in the fun, spread the word, and maybe if we all chant loud enough we CAN stop it raining. See you tomorrow...
* The Gonzo Daily is - as the name implies - a daily online magazine (mostly) about artists connected to the Gonzo Multimedia group of companies. But it also has other stuff as and when the editor feels like it. The same team also do a weekly newsletter called - imaginatively - The Gonzo Weekly. Find out about it at this link: www.gonzo-multimedia.blogspot.com/…/all-gonzo-news-wots-fit…
* We should probably mention here, that some of our posts are links to things we have found on the internet that we think are of interest. We are not responsible for spelling or factual errors in other people's websites. Honest guv!
* Jon Downes, the Editor of all these ventures (and several others) is an old hippy of 56 who - together with an infantile orange cat named after a song by Frank Zappa, and a small kitten totally coincidentally named after one of the Manson Family, purely because she squeaks, puts it all together from a converted potato shed in a tumbledown cottage deep in rural Devon which he shares with various fish, and sometimes a small Indian frog. He is ably assisted by his lovely wife Corinna, his bulldog/boxer Prudence, his elderly mother-in-law, and a motley collection of social malcontents. Plus.. did we mention the infantile orange cat, and the adventurous kitten?
Posted by Jon Downes at 7:00 AM No comments:

ON THIS DAY IN 1897 - British police arrest George Smith for drunken driving. It was the first DWI.
And now some more recent news from the CFZ Newsdesk