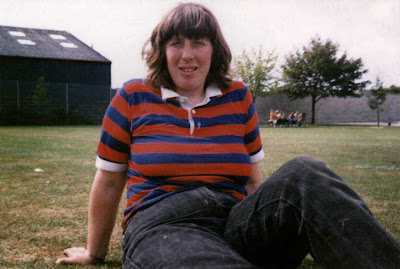 BTO Cuckoo update
Two of the five cuckoos – Lyster and Chris – have made it back to the UK.  Amazingly, Lyster was seen only 10 miles from where he was tagged after his 10,000 mile trip. Kasper, the third of the cuckoos still alive after the demise of both Martin and Clement, has not been heard of since 30th April. 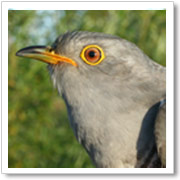 Phil Atkinson, head of international research at the BTO spotted Lyster in the Norfolk Broads on Tuesday.

"We saw him flying past - you can see the wire antenna poking out [from his tag], so it was definitely him," he told BBC Nature. 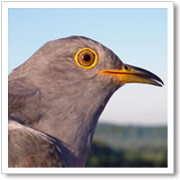 "It's just fantastic; we know where he's been, we know the routes he's taken and now he's back in the broads."

The project is being carried to try to discover why fewer and fewer of the birds return here each year – Britain has lost nearly half of its cuckoos in the last twenty years, with the bird’s population still declining.

"They're African birds really," said Phil Atkinson, who has taken a leading role in the cuckoo project.

"They evolved in Africa."

"All the birds got down to Congo and survived, and it's only on spring migration that we started to lose birds," continued Dr Atkinson.

"The cuckoo is an urgent priority for research," he told BBC Nature.

"This fantastic project is boosting the understanding of this bird so that, hopefully, we can give this bird a future."
http://www.bbc.co.uk/nature/17895997
Read updates on the individual birds’ blogs: http://www.bto.org/science/migration/tracking-studies/cuckoo-tracking

Rare Goose spotted in Sutherland
Usually found in Siberia, and a rare sighting for our shores, a red-breasted goose (Branta ruficollis) was seen at Crofter’s Park, next to the Clynelish Distillery, Brora, Sutherland last week.  Lonie Mackintosh from Achrimsdale was alerted of its visit by his daughter last Saturday and said: "My daughter noticed it as she was walking out – she spotted its red breast – and after she told me about it, I went out with my camera and binoculars."

"It was just grazing and bathing in hollows in the field," he said. His picture shows the red-breasted goose in front, a pink-footed goose in the middle, but he does not know what the big goose is at the back. 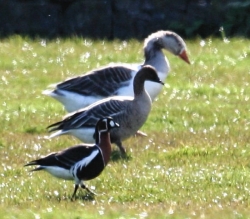 RSPB’s communication manager Alan Tissiman told the Northern Times: "The Red-Breasted Goose is a bird of real conservation concern and a considerable amount of research is currently being undertaken into its habits in order to try to help the population.

"Typically they spend the winter months in the Danube area of eastern Europe before returning to the high tundra to breed. Very occasionally, they turn up in the British Isles but it is certainly unusual. A very good sighting indeed for Sutherland!"
http://www.northern-times.co.uk/News/Brora-twitcher-spots-rare-goose-03052012.htm

Possible first for Britain
Flamborough Head in East Yorkshire was paid a visit by an apparent Atlas pied flycatcher (Ficedula speculigera) at the end of April – and if it was indeed one of these birds then it would be the first record of the species in Britain.  Numbers of this bird have been recorded in Europe which seems to mark an unprecedented spring displacement.  It was trapped and ringed at South Landing and a couple of tail feathers that had been dropped during the ringing process have been kept for analysis.
http://uk400clubrarebirdalert.blogspot.co.uk/2012/04/atlas-pied-flycatcher-trapped-and.html
http://uk400clubrarebirdalert.blogspot.co.uk/2012/04/uk-mega-apparent-atlas-pied-flycatcher.html

Another mindless act of vandalism

The mindless actions of vandals destroyed the Wyevale Wood, Herefordshire, bird hide by setting fire to it.  However, the Hereford Nature Trust has confirmed that this mindless act is covered by insurance and will, therefore, be able to shortly replace it. 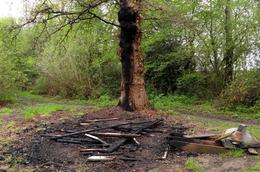 Wyevale wood is secondary woodland on an ancient woodland site. A flat, pleasant walk leads around the 4 acre wood.  More about Wyevale Wood.

Posted by Corinna at 4:32 PM No comments:

And Benny's blog has a posting about the measurements given out for actresses in the 1930s
(and the statistics look mighty suspicious to me, how is it Pola Negri, Mary Pickford, Greta Garbo, Clara Bow, etc, etc, all added up together come out as equals Anita Page??)
http://benny-drinnon.blogspot.com/2012/05/ideal-screen-figure.html
Posted by Jon Downes at 12:34 PM No comments:

Each Sunday if I have the time,
My notifications are done in rhyme,
if I could I'd do them for you in mime,
but that'd be ridiculous not sublime.

First up we have a DVD,
a film that meant a lot to me.
About Zappa and Beefheart and bands like those,
(and here's a clip from the GTOs)
http://gonzo-multimedia.blogspot.com/2012/05/from-straight-to-bizarre-bloody-amazing.html

And next up on the bloggy stage
we have more news'bout Mimi Page
she's so talented it makes you sick,
and she's guesting with a bloke called Kezwik
http://gonzo-multimedia.blogspot.com/2012/05/mimi-page-does-it-again.html

And now sit back with a cup of tea
for a talk on spirituality
by who? I wonder, can you guess?
Jon Anderson (him out of Yes)
http://gonzo-multimedia.blogspot.com/2012/05/jon-anderson-on-yes-and-spirituality.html

Now, I don't mean to make a fuss
but I love that album 'Orfeas'
a song story CD from Judge Smith
retelling an ancient Greek Myth
http://gonzo-multimedia.blogspot.com/2012/05/link-judge-smith-interview.html

And who is left? Goodness me. Cripes!
He can't half play the Uillean Pipes,
he writes music of great majesty
his name it is Troy Donockley
http://gonzo-multimedia.blogspot.com/2012/05/link-troy-donockley-review_06.html

So until next sunday I suppose
I'll just go back to writing prose
which is OK when its prose on prog
and we've had 10,000 hits on the Gonzo Blog
http://gonzo-multimedia.blogspot.com/2012/05/in-which-we-voluntarily-blow-our-own.html

On this day in 1915 the actor Orson Welles was born. Welles is best known these days as the voice of Unicron in the 1986 Transformers animated movie.

A trailer for another of Orson Welles' films, Citizen Kane:

CRYPTOZOOLOGY ONLINE: On The Track (Of Unknown Animals) Episode 57

The latest episode of our monthly webTV show from the CFZ and CFZtv, bringing you news on our activities within cryptozoology and natural history as well as the latest cryptozoological, and monster hunting news from around the world.

News in Criptozoología en España :
The hairy monster of Malaga.
In 1966, a resident of Malaga at home discovers a strange creature ...
All information in :