This morning I was contacted on Facebook by a lady from Germany who happens to have the same Christian name as my wife. She wanted me to have a look at some mysterious footprints that turned up in her garden some years ago. The photographs are, by the way, her copyright and this is used by permission, and may not be re-used. This is her story:

It was some late evening in February 2002. My son and husband were sleeping and I sat on the couch watching TV. I was like 2m away from the porch door (total made of glass, like a window down to the floors). The blinds were shut and the curtains were closed. At some point around 2am - as far as I remember - I felt watched. I have no idea why but I turned on the porch light (from inside), opened curtains and peeked through the blinds, but all I could see was the halfway lit up porch and it was snowing like hell. That night I must have fallen asleep on the couch, dressed, and woke up next morning 8am. My husband had left already, but my son was home, I think it musta been a day off school or whatever. Anyway. During the winter, sometimes there;s a little water on the bottom of the windows, so when I woke, I started to wipe off the window edges, when - from the 2nd floor - I noticed these tracks in the backyard. I try my best English to explain:

There was a lot of fresh fallen snow. The whole area (at that time not totally filled with new built houses) was white. Except for our little garden. A dark circle of tracks would stand out. I woke my son and neighbor. These footprints looked too strange.
They would go around in a circle, up to the porch window, and back. It was very very cold, but the tracks were NOT filled with snow,there was just flat grass inside the prints - like something either heavy or warm must have walked here. Also, the tracks seem to have sharp claws, which cut through the snow, but that's probably just an interpretation, it looks like claws, but since you cannot even tell whats front and whats back of the single track, who would know. The truth is, one cannot even say for sure they're FEET. You can tell the size of the tracks by my hand on the pics. One photo shows my son, walking around looking at the tracks, and next to the tracks you see our own footprints, after we have walked around. Our own prints are filled with flat stepped snow.

These tracks are not typical bigfoot prints, but what are they?

There's a wooden shed at one side of the porch, and some buckets did stand right next to that shed. Whatever walked there,- as you can also see on the pics - has somehow scuttled up to these buckets and made a big step over them. Why? Nobody needs to press themself next to the shed. you can just walk in the middle of the porch, no need to step over the buckets.

My son and neighbor and myself were sort of puzzled, so I called the police. The police officer showed up around noon, most of the tracks had almost vanished for the sun had come out, so he also looked at the photos, He said, this must have been a children in monster houseshoes, but he did not look like he did believe it. A few days later, the snowman that was built in my neighbors garden, had mysteriously moved to a strange place
Posted by Jon Downes at 1:54 PM No comments: 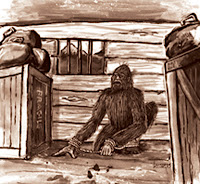 http://frontiers-of-anthropology.blogspot.com/2013/05/guest-blogger-jayasree-is-vedic_2655.html
New at Cedar and Willow, a scheme to intermingle Star Wars, Star Trek, Stargate, Battlestar Galactica, Doctor Who, and various Science-Fictional Reptoid Races with more serious "Ancient Gods from Outer Space (Anunnaki)" History.
http://cedar-and-willow.blogspot.com/2013/05/walk-like-egyptian-god-after-ivan-r.html
New at Benny's Blog for Thelma Todd, an entry on Carole Landis, also a recurring character at Cedar and Willow:
http://benny-drinnon.blogspot.com/2013/05/carole-landis.html
And New at Benny's Other Blog, The Ominous Octopus Omnibus, a continuing reprint of a Dick Tracy story featuring that detestable villain, the Rhodent:
http://bennypdrinnon.blogspot.com/2013/05/dick-tracy-meets-rhodent-pt-iii.html
Blogger is still acting up and I already see I shall need to do some repair work on Jayasree's last part in the series, part 8 [today's release]
Best Wishes, Dale D.
Posted by Jon Downes at 1:14 PM No comments:

Yowie And The Magpie

Yowie And The Magpie from dylan white on Vimeo.

Things are looking up slightly. The car is still not working properly, but Graham reckons he will be able to coax it to Bradworthy tomorrow to get Prudence to the vet. Each morning her hobble is much improved, but by the end of the day she cannot put any weight on the bad leg. This is exactly what happened with her other back leg a few years ago, and I am pretty sure that I shall have to find over a grand from somewhere to pay for the operation. But I always treat dogs and cats as members of the family, and I would no more think of reneging on my responsibilities than I would not think of neglecting Mother or one of the girls. These things happen, and when they do they have to be paid for.

*  Jon Downes, the Editor of all these ventures (and several others) is an old hippy of 53 who - together with his orange cat (who is currently on sick leave in Staffordshire) puts it all together from a converted potato shed in a tumbledown cottage deep in rural Devon which he shares with various fish, and sometimes a small Indian frog. He is ably assisted by his lovely wife Corinna, his bulldog/boxer Prudence, his elderly mother-in-law, and a motley collection of social malcontents. Plus.. did we mention the orange cat?

On this day in 1844 Samuel Morse opened the world's first telegraph line sending the message “What hath God wrought”.


Here's an apt track from ELO:
http://www.youtube.com/watch?v=EZB-DUCrhVQ
Posted by Jon Downes at 11:05 AM No comments: