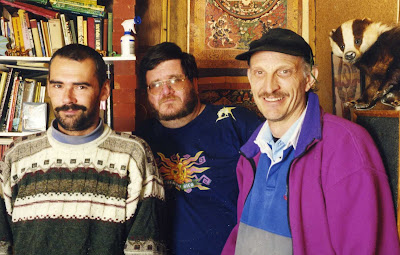 Back in the day (c.1998) Nigel (on right) held it all together at the CFZ. Now he lives oop t'north and we hardly ever see him. But we all wish him a very happy birthday....
Posted by Jon Downes at 11:45 AM No comments:

MUIRHEAD`S MYSTERIES: A GIANT SNAKE IN SOUTH CHINA IN THE 1930s

Mike Hardcastle, Flying Snake`s Australian Sub-Editor found the following story on the excellent Trove Australian newspaper archive a few weeks ago. It is from the Townsville Daily Bulletin (Queensland) of August 21st 1935.

Loch Ness in the Shade

Kwangtung Province in China has now produced the “ Loch Ness” monster, for according to reports received here, says a Canton report, from Toy-Shan, a hilly district of the province, 42 villagers have been killed recently by a huge serpent which has terrorized the population of that district for some time past. The serpent was finally shot dead by a man more intrepid than the rest and this individual has now received a large reward from the local Magistrate. There are various conjectures afloat locally about the nature of the death-dealing monster, which some believe to have been a giant python of a type occasionally found in remoter districts. (!)

Well, there we are. I wonder how many other stories there were around the world in the first half of the decade of the 1930s prompted by the continuing saga of Loch Ness?

http://hauntedskies.blogspot.com/2011/10/haunted-skies-update-on-volume-4-under.html
Posted by Jon Downes at 10:46 AM No comments:

On this day in 1959 Luna 9 took the first photographs of the far side, aka the dark side, of the moon.

Dark side of the moon, eh:
http://www.youtube.com/watch?v=Xl6NfQyNLto

DALE DRINNON: The latest from 'Cedar and Willow'

These are mostly all introductions anyway, more details to be filled in as we go along. I have three more new Cedar-and-Willow blogs to send you the links for