MUIRHEAD`S MYSTERIES: A species of dog in Tahiti lost to science around the time of Captain Cook 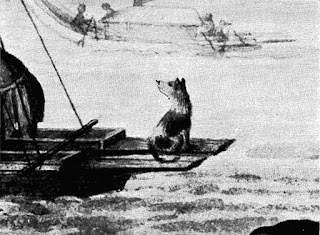 A week or so ago I bought a book from Oxfam, Macclesfield which had a short piece in it about a breed of dog in Tahiti which had died out shortly before Captain Cook arrived there. However the other day I found this image on Wikipedia. The book I bought , `The Golden Haze` by Roderick Cameron (Readers Union, 1964, pp 103 - 104 ) says this: " `Hogs` writes Forster, `are part of the riches of the Tahitians and would appear to be entirely the property of the chiefs. `

Pigs were never so plentiful in the islands as to be common food. Dogs, on the other hand,were. These were a special breed, kept solely for eating. The race has died out completely and no one knows what they looked like (emphasis my own. Then what about these Wikipedia images?) They were small and pretty, says Bougainville (this could refer to Louis Antoine de Bougainville a French navigator,explorer and military commander, 1729-1811 ) and , according to Forster, ( I do not know the identity of this person) very stupid; the most dull animals imaginable. They do not seem to have the least advantage in point of sagacity over our sheep, which are commonly made the emblems of silliness...It is odd, but no pictorial representation of these dogs exist.They varied a good deal in size, ranging from that of a lap-dog to a  large spaniel. Their heads were broad and their snouts pointed, the eyes were very small, ears upright and their rather long and wiry hair of different colours , mostly white or brown. `They seldom if ever barked but howled sometimes, and were shy of strangers to a degree of aversion." I found an interesting snippet in the Evening Tribune (San Diego) of  July 18th 1929 that Cook,in his description of Tahiti in 1769, mentions that the dogs of Tahiti were strict vegetarians.Cook visited Tahiti on many occasions, his visit in 1769 was the one where he observed the transition of the planet Venus.

Letters to the editor

Riverine Herald
The profuse, descriptive detail so well presented in Col Bailey's excellent book Lure of the Thylacine has enabled me to conclude that the strange, ...
Posted by Jon Downes at 4:28 PM No comments:

On the hunt for the British Bigfoot

Sasquatch Chronicles
LegendsBeware writes "Winter 2017, I return to the spot where (in 2015) I found a mutilated deer and an almost convincing large foot print."

Bigfoot Evidence - blogger
Winter 2017, I return to the spot where (in 2015) I found a mutilated deer and an almost convincing large foot print. Spoiler alert: I do NOT find Bigfoot ...

Colorado Hikers Surprised By Bigfoot-Like Creature Lurking In The Woods
Disclose.tv
For many, the Colorado trails are an historic as well as excellent escape spot destination to see wildlife, beautiful landscapes and witness nature in it's ...

Tonight on the Crypto-Kid, Colin Schneider will be joined by Dr. Brian Parsons. Dr. Parsons is the host of the Paranormal News Insider also on WCJV Radio. Colin and Dr. Parsons will discuss the state of cryptozoology today and how it can be improved. Also, if time allows, will delve into some recent information concerning mystery feline sightings in America. This is going to be a top-notch episode. Make sure you don't miss out and listen live at 8 pm EST at www.wcjvradio.com/live and jump in the chatroom as well 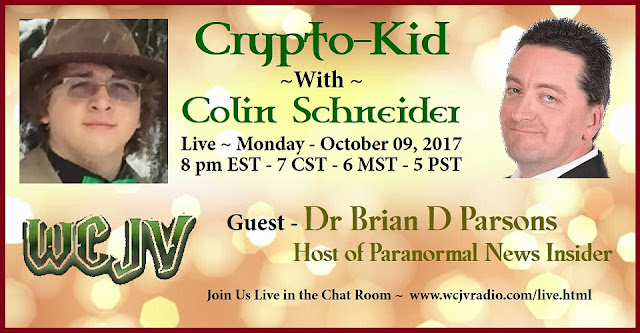 Posted by Colin Schneider at 2:28 PM No comments:

ON THIS DAY IN - 1940 - St. Paul's Cathedral in London was bombed by the Nazis. The dome was unharmed in the bombing.
And now some more recent news from the CFZ Newsdesk