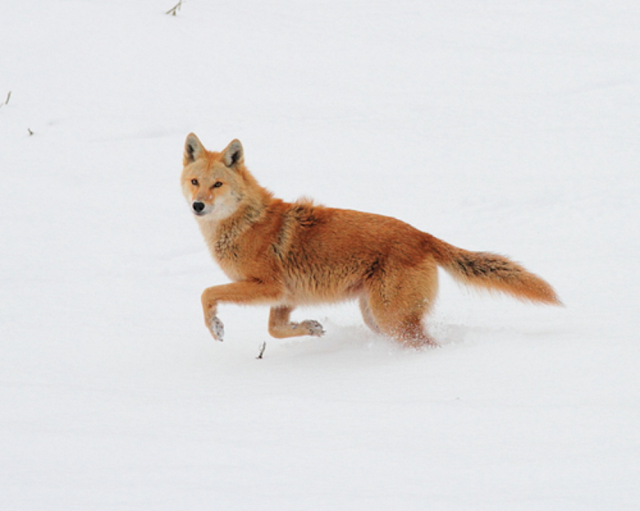 This coyote is gold in color.
It has no sabling, which is very much indicative of the genotype we see in domestic dogs.
Read more
Posted by Retrieverman at 1:26 PM No comments:

CRYPTOLINK: Do these footprints - found in snow on countryside just outside of Tunbridge Wells - belong to the town's mysterious Bigfoot?

The unusually large prints were discovered just outside of High Woods, between Tunbridge Wells and Pembury, at the weekend. Sent in to us by a reader, who wishes to remain anonymous, it was speculated they could have come from the eight-foot tall Kentish Apeman.
The beast has caught the nation's attention ever since we reported on claims it had been spotted on the Commons in November. Our story was picked up by The Sun, Daily Mail, Metro and Telegraph and others.
It then sparked the interest of the London Cryptozoology Club, who went on an expedition to Tunbridge Wells earlier this month in search of the monster.
Read on...
Posted by Jon Downes at 4:29 AM 1 comment:

We're back and playing Catch Up now,
after just a week, it's amazing how
much stuff to do has accumulated
far more than I'd anticipated

But it's Sunday, which means (you all know it)
it's the day I pretend to be a poet
and to some people's bemusement,
do the blogs in rhyme for my own amusement

My family were all eating tea, and watching something on TV
back in 1970-whatever (my memory is not quite THAT clever)
when I first heard Barbara Dickson sing
now here's some news (and everything)
http://gonzo-multimedia.blogspot.com/2013/02/barbara-dickson-gateshead-revisited.html

Chris Squire talks about the lure,
of the road and the new Yes tour,
and how there'll be a new CD
which is pretty good news to me
http://gonzo-multimedia.blogspot.com/2013/02/link-chris-squire-discusses-classic.html

And now something that you should know
there is an Ant-Bee video,
which once again breaks all the rules,
and I think that it's pretty cool
http://gonzo-multimedia.blogspot.com/2013/02/ant-bee-featuring-michael-bruce-flutter.html

And now we go to Austin City,
where the poets are great and their words are pretty
for our daily visit (don't you know it)
to the home of Thomas the World Poet
http://gonzo-multimedia.blogspot.com/2013/02/thom-world-poet-daily-poem_3.html

And now it's the groovy Track of the Day,
you know what I mean (wayhay)
He wears a hat and his hair is wavey
Ladies and Gentlemen... ALAN DAVEY
http://gonzo-multimedia.blogspot.com/2013/02/the-gonzo-track-of-day-alan-daveys.html

Now, you people must understand
I'm a massive Eric Burdon fan
and I am really pleased to see,
he's got a smashing new CD
http://gonzo-multimedia.blogspot.com/2013/02/former-soviet-union-chief-mikhail.html

In the annals of the music biz
there are few that compare to our liz
she sent us this nice link for fun
in Lincolnshire Auburn are number one
http://gonzo-multimedia.blogspot.com/2013/02/httpwww.html

And finally we must count the cost
and say goodbye to those we've lost
we are missing him, and you know we've missed her
a soul singer and an Andrews Sister
http://gonzo-multimedia.blogspot.com/2013/02/those-we-have-lost-cecil-womack-1947.html
http://gonzo-multimedia.blogspot.com/2013/02/those-we-have-lost-patty-andrews-1918.html

*  Jon Downes, the Editor of all these ventures (and several others) is an old hippy of 53 who - together with his orange cat puts it all together from a converted potato shed in a tumbledown cottage deep in rural Devon which he shares with various fish and batrachians. He is ably assisted by his lovely wife Corinna, his bulldog/boxer Prudence, his mother-in-law, and a motley collection of social malcontents. Plus.. did we mention the orange cat?
Posted by Jon Downes at 3:29 AM No comments:

Today is Groundhog Day in North America when the appearance of a groundhog is said to herald the end of winter, or not if it doesn't show.
And now the news:

Posted by Graham Inglis at 2:53 AM No comments: