CAN ANYONE IDENTIFY THESE?

When Richard Muirhead and I were boys in Hong Kong, these insects were known as 'bloodsuckers'. I have always thought that they were juvenile praying mantids, but the fact that these two are mating would seem to refute that theory and indicate that they are not juvenile anything! C'mon guys, what are they? 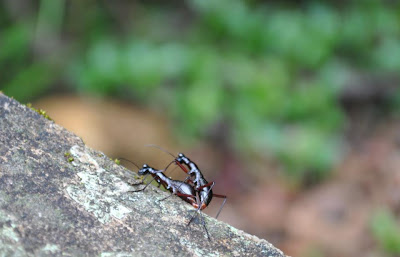 Fantasy-and-horror artists advised their hopeful fans at the Manchester Monster Convention over the weekend.

The convention was held at Sachas Hotel by Hic Dragones, a Manchester-based literature organisation that runs training events and publishes dark fiction.

The first talk of the two-day event was arguably the most anticipated as it featured Emmerdale's Dominic Brunt (Paddy).

The Macclesfield actor was accompanied with cameraman Neal Myers to show a clip from his directorial debut, a zombie horror named Before Dawn.

Mr Brunt and Mr Myers followed the clip with an entertaining and informative Q&A, where they revealed that the shoot was so meticulous that they hired a dental lab technician to design zombie teeth for the actors to wear.

Good Morning Campers! I'm your Uncle Jonathan and I welcome you to the Gonzo Holiday Camp...

This morning we have a bumper crop of posts with stories about Rick Wakeman, Jon Anderson, Michael Des Barres, Mimi Page, Jefferson Starship, and a mightily peculiar band called W.O.F...

W.O.F. Goodness me this band are peculiar. I like them a lot:
http://gonzo-multimedia.blogspot.com/2012/04/wof-wtf.html

and finally, Michael Des Barres in Japan with Silverhead:
http://gonzo-multimedia.blogspot.com/2012/04/michael-des-barres-flyer-for-tokyo.html

See you tomorrow...
Posted by Jon Downes at 1:28 PM No comments:

On this day in 1912 RMS Carpathia brought 705 of the survivors from the Titanic to New York city.

It's surprising they got away with this joke in Ghostbusters 2, but then it treats the disaster with more reverence than having a dog rapping about it being “Party Time” just before the ship sinks:

Two renditions of 'Cadborosaurus' (upper one by C. M. Kosemen; one at lower right by Naish) with a pipefish. Not to scale!

Over the last few months, I and two of my colleagues have been involved in an interesting dialogue in the literature. It concerns the entity dubbed ‘Cadborosaurus’ – a marine, horse-headed ‘mega-serpent’, supposedly reported by witnesses from the waters off British Columbia and elsewhere in the North Pacific. People who read my stuff (both here and in print) will know that I have more than a passing interest in cryptozoology, and especially in ‘sea monsters’; indeed, I’ve written about ‘Cadborosaurus’ quite a few times. As I always say, this interest in cryptozoology might be a dumb thing to admit, given the negative stigma attached to the field. And I’m sure that it’s based in part on adherence to the naïve and childish hope that sea monsters, relicts hominoids and such might actually be real.

We would like to welcome our old pal Lars Thomas and his blog - The CryptoDane - to the CFZ Bloggo network. To start here is an interesting post about thylacines...

It seems to me that Danish cryptozoology (i.e. me!) is besieged by letters at the moments. During a recent clean-up, I came across a bundle of letters that used to belong to my mother. She died almost 17 years ago, so I had completely forgotten their existence. Never mind - I was just about to throw them away, when a single word caught my attention; "pungulv" - that's danish for "thylacine". The letters turned out to be from a friend of my mothers. She had emigrated to Australia shortly after the Second World War with her family, the Temmings, but she and my mother kept contact for many years until what was left of the family returned to Denmark in the early 70's.