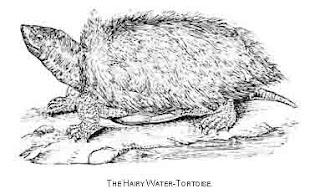 In China, specifically around Hankow so it seems, is a type of hairy tortoise; the following story appeared in the Bradford Observer of March 13th 1875, and the e-mail I was sent containing it included errors, but the substance of it is below. This is also a Christmas present for Jon as I know he`s interested in these critters.

Several notable living curiosities have been brought to the Brighton Aquarium. Chief amongst them were the " telescope fish," just  arrived  from , and which are so  called from their prominent eyes protruding considerably from each side of the head.  The Chinese name of the fish is " Long-sing- ya. Bloch makes it a distinct species, which he calls  Cyprinus macropthalmas, but it is merely a monstrosity —though a very remarkable one— of the common gold- carp (Carassius auratus), and has been cultivated by (natural?)selection by the Chinese, … breeding these domesticated pets, until the progeny is so disguised that the original form is almost lost. Regarded from the front, it appears to have a -red forehead, large and projecting eyes, and compressed under-lip ; a countenance, in fact, which resembles at once  a half-strangled pup-dog. My friend Mr. Bartlett, of the Zoological gardens, who tells me that [it is] many years since he had some of them … i compare the skin of the Chinese… perpetuating these deformities in fish with that of the Japanese in producing, by similar selection, pet dogs with very short noses, and large projecting eyes. We learn from ancient Chinese encyclopedias, quoted by Mr. Darwin in his Descent of Man," that goldfish were first reared in confinement in in A.D. 960. In the year 1129 they abounded; and "since 1548 these have been produced at Hang-chow a variety called the -fire-fish/ from its  intensely red colour. It is universally admired, and there is not a household where it is not cultivated, in rivalry as to its colour,  as a source of profit." A gentleman, Mr. John Meaney, of the Imperial Customs, Hankow, recently arrived from China, brought with him with great care, and  most kindly presented to the Aquarium, a little tortoise covered with a singular growth on the shell,  three or four inches long, which he believed to be hair. This erroneous (?) belief is doubtless fostered by - the Chinese, who induce Europeans to purchase, at great curiosities, their "hairy tortoise," as some rogues in England sell painted canaries. The so-called " hair "is a filamentous alga, or water weed, which grows on the hack of the animal in the pond or tank in which it is kept exposed to the light. I remember examining- with  Mr. Buckland, some years ago, a similar specimen which  had been sent to him. The microscope soon showed us the character of the filiform growth.— Land and Water. (1)

In the “Travels of a Pioneer of Commerce in Pigtails and Petticoats” by T.T. Cooper (London,Murray,1871, page 459) there is a plate of one of these hairy tortoises from the lakes of Ha-su above Hankow (see image here,Rich) . These curious little animals were two inches long, and covered on the back with a long confervoid growth resembling hair.The tortoise being a sacred emblem in , the Chinese make pets of the hairy tortoise which they keep in basins of water during the summer months, and bury in sand during the winter. (2)

There was also an American hairy tortoise:

To the editors of the Popular Science Monthly

Noticing your interesting extract from “Land and Water” concerning the “hairy tortoise” , I take the liberty of mentioning a similar species found to my knowledge in the lakes of this valley. Its description tallies almost exactly with that of the Chinese variety, except perhaps in size. It is about three inches in length by two and a half breadth, is very closely covered by its shell , the calipiee is not hinged, and out of some dozen specimens examined by me not one was without the coat of water-grass. Its habitat is at the bottom of shallow lakes and ponds, and near the submerged roots of trees, where it is often caught with the hook. It has a remarkably fetid odour. The grassy or confervoid covering is not of any great length, generally about one half or three fourths of an inch. It is, I believe an undescribed species, though Mr Aggasiz may have had a specimen among his collection of tortoises from the .

There is a telescope fish in the cold waters of the S.Hemisphere and gold-fish of this name, but I don`t know whether or not the telescope fish mentioned above is of these species.

In an article for the first edition of Cryptozoology Bernard Heuvelmans wrote that cryptozoology is the study of 'unexpected animals' and following on from that perfectly reasonable assertion, it seems to us that, whereas the study of out-of-place birds may not have the glamour of the hunt for bigfoot or lake monsters, it is still a perfectly valid area for the Fortean zoologist to be interested in. So, after about six months of regular postings on the main bloggo, Corinna has taken the plunge and started a 'Watcher of the Skies' blog of her own as part of the CFZ Bloggo Network.

New at Frontiers of Anthropology:

So, the world didn't end! Tim and Graidi came to see us yesterday and Mother enjoyed cuddling the baby very much. Later on, while Corinna did arcane things in the kitchen, Mother and I watched the new Magick Brothers DVD (released next month) and it is absolutely gorgeous. It could well be argued that Daevid Allen is at his best in an acoustic setting without drum and bass. I recommend it massively. I also finished reading Mad World, a partial biography of Evelyn Waugh, which I shall blog about soon. In the meantime, one last trenche of shopping and it is all over....


*  Jon Downes, the Editor of all these ventures is an old hippy of 53 who - together with his orange cat - puts it all together from a converted potato shed in a tumbledown cottage deep in rural Devon. He is ably assisted by his lovely wife Corinna, his bulldog/boxer Prudence, his mother-in-law, and a motley collection of social malcontents. Plus... did we mention the orange cat?
Posted by Jon Downes at 12:57 PM No comments:

WELL EVEN THE DAILY MAIL GET IT WRONG OCCASIONALLY

Email ThisBlogThis!Share to TwitterShare to FacebookShare to Pinterest
Labels: humour

On this day in 1956 the first captive-bred gorilla was born in Columbus Zoo, Ohio, in the USA.

Here's a rare track by the Gorillaz; Don Quixote's Christmas Bonanza:
http://www.youtube.com/watch?v=edCV_RQhcXE
Posted by Jon Downes at 10:57 AM No comments: