In an article for the first edition of Cryptozoology Bernard Heuvelmans wrote that cryptozoology is the study of 'unexpected animals' and following on from that perfectly reasonable assertion it seems to us that, whereas the study of out of place birds may not have the glamour of the hunt for bigfoot or lake monsters, it is still a perfectly valid area for the Fortean zoologist to be interested in. So, after about six months of regular postings on the main bloggo, Corinna has taken the plunge and started a 'Watcher of the Skies' blog of her own as part of the CFZ Bloggo Network.

http://frontiersofzoology.blogspot.com/2013/01/bigfoot-evidence-jays-blog-bizzare.html
And I have made a special effort to add comments at the end of Jay's Blog. Jay has also asked me to do a guest blog for him, which I said shall have to come on Wednesday. I am going to be at the hospital again overnight and Tuesday but it's basically downhill all the way after that visit.
Best Wishes, Dale D.
Posted by Jon Downes at 2:35 PM 1 comment:

I was feeling somewhat less than sane yesterday, which may have coloured what I was watching on TV to a greater or lesser extent. However, I watched episode two of 'Blandings', which I thought was nowhere near as good as the first episode. Evelyn Waugh once wrote that to criticise Wodehouse was like "taking a spade to a souffle'. I would say much the same about tinkering with his plots. Treat the man with some respect for God's sake! The originals are exquisite, the TV series (despite early promise) doesn't live up to them, or at least last night's episode didn't. Later in the evening after Mother had gone to bed I sat down and watched '24 Hour Party People', which was much bleaker than I remember when I watched it with Richard ten years ago. This morning I feel like a cross between Tony Wilson and Lord Emsworth (with Prudence as the empress). David came over yesterday to discuss e-books, and progress is being made. Richard went home yesterday but will be back on Thursday. Graham is setting up interviews with Alan Davey and Michael Butterworth, and the orange cat has an infection, but according to Shosh it is nothing to worry about. Life is complicated today, and I still feel mad as a bagful of cheese.

*  Jon Downes, the editor of all these ventures is an old hippy of 53 who - together with his orange cat - puts it all together from a converted potato shed in a tumbledown cottage deep in rural Devon, which he shares with various fish and batrachians. He is ably assisted by his lovely wife Corinna, his bulldog/boxer Prudence, his mother-in-law, and a motley collection of social malcontents. Plus... did we mention the orange cat?
Posted by Jon Downes at 2:28 PM No comments:

Posted by Andrew May at 1:40 PM No comments:

NOTICE: The Center for North American Herpetology (CNAH) is proud to announce the launch of a new open access, online journal

The Journal of North American Herpetology (JNAH). With an impressive cadre of Associate Editors from all herpetological disciplines, we are now officially soliciting authors for manuscripts and expect to publish the premiere issue by June 2013.

The Journal of North American Herpetology provides an open access online venue with the use of all modern digital technologies for peer-reviewed contributions of all aspects of North American herpetology within the geographic boundaries of the United States and Canada. Because of its digital nature JNAH should be able to incorporate relevant video and sound media as well as high resolution images into articles.

A brief and simple set of instructions to authors as well as a list of topic headings and Associate Editors can be viewed on the JNAH web page (JNAH.CNAH.org). Questions can be addressed to JNAH.editor@cnah.org. We look forward to your submissions.

Email ThisBlogThis!Share to TwitterShare to FacebookShare to Pinterest
Labels: journals 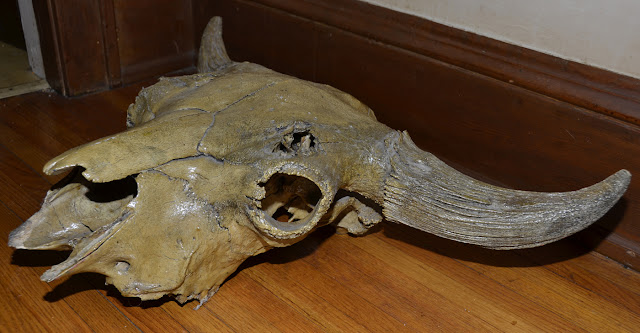 Something in the back of my mind plus a little research made me suspect the purported age of this skull
may not have been accurate. So I wrote to the Minnesota Historical Society providing them with photos.
Two days later I received this reply from the head of Archaeology.

Still not bad news after all. And I just sold the skull to a school teacher who will continue to use it in education. Only now she can teach about this magnificent beast using real and accurate information.

“Thanks for sending the photos of the bison skull in your possession.  Based on these images, this does appear to be a specimen of Bison bison, the modern form of American bison, and not one of the larger extinct varieties.
Estimating the age of this skull really isn't possible without some information about the context in which it was found.  Finds of bison bone are relatively common in Minnesota, and modern bison have been present in the state from at least 6000 years ago until the mid-19th century.  This specimen could potentially date to any time in that range.
The Historical Society does not collect natural history specimens; that is, animal bone or similar items that have no verifiable connection to human activity.  Unless this bison skull was found in a context that indicates that it was, for instance, hunted and killed by humans, and you had evidence in hand to document that, this is not something that would be suitable for our collections.
The Science Museum has a substantial collection of large mammal specimens.  You might check with them to see if they are interested in this skull.  But, again, without information about the context in which it was found, the research value is very limited.
Thanks for your inquiry.
Pat Emerson
Head of ArchaeologyMinnesota Historical Society”

On this day in 1924 the comedian Benny Hill was born. Hill is perhaps best remembered for his modern fable of supernatural retribution “Ernie”.
And now the news:


A tale of terror set to music:
http://www.youtube.com/watch?v=8e1xvyTdBZI
Posted by Jon Downes at 11:27 AM No comments: