MUIRHEAD`S MYSTERIES: There was a wee lizard near Kirkaldy,which found itself in a wee quandry...

I found the following strange story in a cutting kindly sent to me by American Fortean Gary Mangiacopra a few days ago. It`s from The Daily Commercial Register (Ohio) of 22nd December 1852, a case of an entombed "lizzard" (sic)

" EXHUMATION OF A LIZZARD - A short time since, as David Virtue, mason at Auchtertool
​, a village four miles from Kirkaldy,in Scotland, was dreesing (sic) a millstone from a large block, after cutting away a part, he found a lizzard embeded in the stone.it was about an inch and a quarter long, of a Brownish yellow color, and had a round head, with bright sparkling eyes.It was apparently dead, but after being about five minutes exposed to the air, it showed signs of life.One of the workers very cruelly put snuff in its eyes, which seemed to cause it much pain. it soon after ran about with much celerity, and after half an hour was brushed off the stone and killed. When found, it was coiled up in a round cavity of its form, being an exact impression of the animal. There was about 14 ft of earth above the rock, and the block in which the lizzard was found was 7 or 8 ft deep in the rock, so that the whole depth of the animal from the surface was 21 or 22 ft. The stone had no fissure, was quite hard, and one of the best to be got from the quarry of Cultaloe, reckoned perhaps, the best in Scotland." 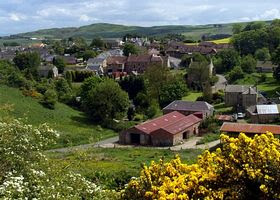 The photo above shows Auchtertool

https://l.facebook.com/l.php?u=https%3A%2F%2Fpuxccbo05z-flywheel.netdna-ssl.com%2Fwp-content%2Fuploads%2F2015%2F02%2Fcommon-lizard-1.jpg&h=ATP3HREyMraH4HQCkdXyZ2FobKwXiPCk1HRn_J128rgCEns9kwmK7xgXZdkpbgu9VqWaOE3Lo7mI4ZUvBaNC2-kceZZw950qMRcrQeDtGFD3EgKqcsZbUWwF3qE&s=1
Posted by Jon Downes at 12:34 PM No comments:

Posted by Liv McCarthy at 11:06 AM No comments:


* Jon Downes, the Editor of all these ventures (and several others) is an old hippy of 57 who - together with a Jack Russell called Archie, an infantile orange cat named after a song by Frank Zappa, and two half grown kittens, one totally coincidentally named after one of the Manson Family, purely because she squeaks, puts it all together from a converted potato shed in a tumbledown cottage deep in rural Devon which he shares with various fish. He is ably assisted by his lovely wife Corinna, his bulldog/boxer Prudence, his elderly mother-in-law, and a motley collection of social malcontents. Plus.. did we mention Archie and the Cats?
Posted by Jon Downes at 10:56 AM No comments:

Bigfoot Evidence - blogger
Bigfoot Family Sighting in Utah. Bigfoot Tony on youtube takes a look at a video clip of a possible bigfoot encounter in Utah.

Bigfoot in the Snow, New Spot Found
Squatchable
After finding large bipedal track ways in the snow we discover a possible Bigfoot bedding spot along with several strands of hair we collect for analysis ...

Bigfoot Camera Catches Something In The Deep Swamps
Bigfoot Evidence - blogger
Chris and Mark of "Trail To Bigfoot" were photographed by one of our trail cams in the Green Swamp. We have been running a project for years called ...

'Bigfoot' Prints in TX City Explained
Coast to Coast AM
The intriguing series of 'Bigfoot' prints found in the parks of a Texas city have been revealed to be a clever promotional campaign.
Posted by Jon Downes at 4:30 AM No comments:

Science Fiction
... horror novel being adapted to the big screen and this time around we'll be able to check out 'The Loch' which focusses on the Loch Ness Monster!