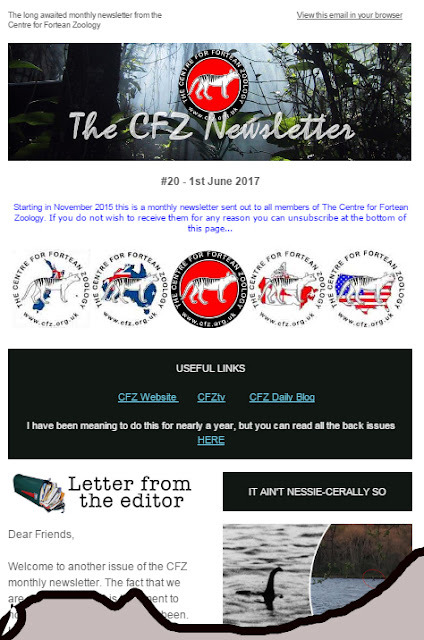 For those of you not in the know, at the beginning of each month we send out a newsletter to all members of the CFZ. The most recent (which went out a few minutes ago) included articles on Loch Ness sightings, The Bonzo Felix, a mysterious "lizard cat", a new book on vampires, a mystery invertebrate from from Hong Kong, CFZ in the news, the return of OTT, Expedition Profiles for 2017, Notes and Queries etc.

If you want to view a sample issue click here: http://tinyurl.com/pw7rw9l
Posted by Jon Downes at 3:23 PM No comments:

Now is, once again, time for all good folks to come to the aid of the party. In this context, the good folks are the readers of this blog, and the party is the CFZ.

As you may well be aware, life has not been easy these last few years. We, for numerous reasons, have lost various volunteers who used to help us out.

We are in desperate need of proof readers. We can’t afford to pay you, but you get a free copy of the book a credit in the book, and our eternal gratitude.

Is there anybody out there who wants to volunteer?


Love Jon
Posted by Jon Downes at 2:46 PM No comments:

Bigfoot Activity Heats Up In Oklahoma
Bigfoot Evidence - blogger
Robert Dodson is checking out his research area when he thinks he sees a head through the viewfinder of his video camera. Check it out: ...

Real or Hoax? The “Creepy Bigfoot” Picture from Canada
BigfootTimes
Possible bigfoot captured in tourist video. «Next Post Searching The Green Swamp In Florida For Bigfoot aka Skunk Ape ...
Posted by Jon Downes at 11:21 AM No comments:

ON THIS DAY IN - 1967 Beatles release "Sgt Pepper's Lonely Hearts Club Band" in the US, goes on to spend 15 weeks at number oneAnd now some more recent news from the CFZ Newsdesk