The best documented Australian "sea serpent" was an elongated, inquisitive mystery animal which frequented Deception Bay in the period 1959/60. Situated at approximately 153° 7' E, 27° 9' S, not far north of Brisbane, Queensland, Deception Bay is a sub-section of Moreton Bay. Roughly semicircular in shape, it is bounded on the south by Scarborough, the northernmost part of the Redcliffe peninsula, and on the north by Bribie Island. I can never hear the name, Deception Bay without thinking, "monster" because the first time I heard about it was in relation to the monster, not long after I moved to the Brisbane area as a boy.

In December 1996, I was on talkback radio promoting my book, Bunyips and Bigfoots. When the compere referred to the section on the Deception Bay monster, a Mr Mick Scheirupflug phoned in to say that he also had encountered a strange animal in the bay. One thing lead to another and, that evening, I was able to interview all three witnesses independently by telephone.
Matters of Agreement. All three agreed on the basic details. Several decades before, Mr Scheirupflug, his son, and young friend had hired a boat in order to fish for whiting in the bay. The creature surfaced not too far away, and was in view for a few minutes, moving parallel to them. It was a slim, serpentine animal consisting of a series of humps, but with no fins. They had difficulty describing its motion but, after some probing, but not leading, questions they all agreed it moved by vertical undulations. They also all agreed that it finally slid forward into the water and disappeared. They did not mention it to anybody else. Now for the individual stories.
Read on...
Posted by Jon Downes at 10:14 PM No comments:

LINK: African wolf found in Morocco for the first time

For some years I have been maintaining that one of the most interesting areas of cryptozoology for the nest few years is going to be the study of mystery dogs around the world. My own researches into the Texas blue dogs, have been publised quite widely and yes there is a book in preperation, which I will finish when I have enough time and can previal upon an amanuensis (probably the ever lovely Jess Heard) to let me dictate the rest of the bloody thing to her.

In recent years there have been some amazing development taxonomy of African Canids. Last year the Eygptian jackal turned out not to be a jackal at all but a sub-species of the grey wolf. Now so call jackals in Senegal and Moroccan have also turned out to be wolves. The implication for other populations, for example the jackals of hungary which the locals call 'reed wolves'. Watch this space. 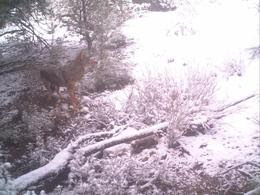 Camera trap photos from the Middle Atlas reveal a wolf

September 2012. A group of Spanish-Moroccan researchers has announced the discovery of the African Wolf (Canis lupus lupaster) in the Middle Atlas Mountains of Morocco. The team leader, Vicente Urios, from the University of Alicante says it is "a fabulous find". The wolves were photographed by camera trap in 2011.

The researchers discovered from the Berbers that inhabit that they knew of two types of "jackals", one large and one small. Vicente Urios's team guessed that the largest would actually be a wolf. "They even have a word for wolf, but they always thought the animals were jackals" says Urios.

The photographs show an animal with "obvious wolf characteristics, such as a large body, slender, with a powerful neck, tall individuals with darker mantle and short tail." The photo is taken in the Atlas at about 1,800 metres.

Why do I do this? I may be a middle-aged disabled man with a tendency to drink too much, but I believe in the redemptive power of music. From the age of 12 (that's 40 years ago this summer) rock music has been a very important part of my life. I have a tendency to fetishise it, and also a tendency to endow it with more importance than anyone else does, but that is just the way that my proverbial cookie crumbles. And today my cookie is still very much crumbling. In fact it is crumbling so enthusiastcally that we have considerably more stories than usual..

Michael Des Barres is a very special artist. His latest album 'Carnaby Street' is one of the greatest albums of the year, not just on Gonzo, but everywhere, and I confidently predict that when the rock historians look back at 2012 with jaundiced eyed, that 'Carnaby Street' will be one of the few redeeming features that they will find.
http://gonzo-multimedia.blogspot.com/2012/09/a-communique-from-michael-des-barres.html

For over four decades Hawkwind have been the embodiment of a certain ideal. They have a spirit of artistic and personal integrity which is sadly missing in the Pop Idol generation of musical performers. Today we link to an insightful review of their debut album all those years ago...
http://gonzo-multimedia.blogspot.com/2012/09/hawkwind-link-to-retrospective-review.html

Another visit to the universe of Thom the World Poet..
http://gonzo-multimedia.blogspot.com/2012/09/thom-world-poet-daily-poem_6.html

An updated press release about Jon Anderson's imminent tour of South America, his Brazilian football song and other current and forthcoming projects from the legendary Yes vocalist
http://gonzo-multimedia.blogspot.com/2012/09/the-latest-jon-anderson-press-release.html

The annual prog awards have just been held. Here is a full list of the winners...
http://gonzo-multimedia.blogspot.com/2012/09/prog-awards-2012.html

I am somewhat of a rock music historian, but I am also a Fortean, and the more peculiar aspects of rock music history have always intrigued me. Like, for example, the question of how a notorious mass murderer got the reputation of being a songwriting genius when (in my humble opinion) he couldn't sing for toffee..
http://gonzo-multimedia.blogspot.com/2012/09/mythbusting-california-prison-blues.html

Rick Wakeman has lived a long and interesting life, and in a new interview coinciding with his visit to New Zealand he tells some interesting and amusing anecdotes.
http://gonzo-multimedia.blogspot.com/2012/09/link-rick-wakeman-keys-to-kingdom.html

The Gonzo Daily is a two way process. If you have any news or want to write for us, please contact me at jon@eclipse.co.uk. If you are an artist and want to showcase your work, or even just say hello please write to me at gonzo@cfz.org.uk. Please copy, paste and spread the word about this magazine as widely as possible. We need people to read us in order to grow, and as soon as it is viable we shall be invading more traditional magaziney areas. Join in the fun, spread the word, and maybe if we all chant loud enough we CAN stop it raining. See you tomorrow

On this day in 1972 Idris Elba was born. Elba has stared in the movies Thor and Ghost Rider: Spirit of Vengeance as well as playing the title character of the quite frankly brilliant detective series Luther.

A great scene from series 1 of Luther:

INTERESTING FACTS ABOUT CHICKENS: For the Rooster, Size Matters: How Size of Hen's Comb Is Linked to Ability to Lay More Eggs

A lone rooster sees a lot of all the hens in the flock, but the hen with the largest comb gets a bigger dose of sperm -- and thus more chicks. This sounds natural, but behind all this is humanity's hunger for eggs.

For thousands of years, people have tinkered with the development of domestic chickens. Through selective breeding for a few characteristics such as large muscle mass and increased egg-laying, we have at the same time caused numerous other radical changes in appearance and behaviour. A research group at Linköping University in Sweden has now shown how the size of a hen's comb is bound up with the ability to lay more eggs. The results have been presented in the scientific journal PLoS Genetics.

Compared with the original wild jungle hen, domestic hens have larger combs as well as denser bones. This influences egg-laying, as the hen's bone tissues provide calcium for the eggshells. The greater the bone mass, the more eggs she can lay.

After having spotted a clear correlation between comb size and bone mass in chickens from a cross between red junglefowl and domestic chicken, the research group -- under the leadership of evolutionary geneticist Dominic Wright -- set up a study where such chickens were crossed for several generations. In this way the genome was split up into smaller and smaller regions, which allowed the "mapping" of the functions of individual genes.

In the eighth generation, the researchers found an area that had a strong effect on the weight of the comb -- but also on bone mass and fertility.

The genetic variation has gradually decreased over the course of domestication. In domestic chickens there are now some 40 known small regions with stable genes that potentially govern their typical "domestic" characteristics. LiU researchers have now discovered two "pleiotropic" genes: two genes connected to each other that influence several characteristics simultaneously. By regulating the production of cartilage, they influence combs (which consist of cartilage throughout) as well as bone growth (where cartilage is the base material) and, ultimately, egg production.

"The original hens have smaller combs, thinner legs, and lay fewer eggs. When people bred for the characteristic of laying many eggs, the comb grew automatically," Dominic Wright says.

In nature, the comb is an example of a sexual ornament. Individuals -- often males -- with the most impressive ornaments are favoured by females, thereby obtaining more numerous offspring than their competitors. In domesticated animals, sexual selection -- like natural selection -- has lost its role, as it was humans who determine breeding.

KARL SHUKER: Lions and Satyrs and Dragons - Oh My Car

http://karlshuker.blogspot.co.uk/2012/09/lions-and-satyrs-and-dragons-oh-my-car.html
Posted by Jon Downes at 10:07 AM No comments: