Check this out - a song about the Jersey Devil by a band who sounds like 'The Very Things'
Posted by Jon Downes at 12:37 PM No comments:

CRYPTOLINK: Serpents in the Waters of Time - Historical Accounts of Sea Serpentry

Even in modern times, stories of sea monsters fascinate us and taunt our minds with incredible possibilities. Could it be that tremendous reptiles–dinosaurs, in essence–could still exist on our planet, and inhabit the darkened waters of our ocean’s depths?
A classic story related by the marine scientist Lionel Walford in 1963 would indicate that something along these lines appears to be the case. In July of the aforementioned year, Walford and his company claimed to have seen a 50-foot-long, undulating serpent-like creature, observed as it swam near the surface only a few miles off the New York shoreline. “It resembled a transparent sea monster. It looked so much like jelly. I could see no bones and no eyes, nose, or mouth. But there it was, undulating along, looking as if it were almost made of fluid glass.”
What was the creature that Walford and his crew had seen? In many ways, the translucent quality the animal possessed is reminiscent of what are known as leptocephalus, the scientific name for eel larvae. However, the larvae form of the eel is never known to grow to such great sizes, let alone the parent animal when fully grown. In other instances, the animals are far more serpentine in both color as well as appearance, the likes of which we often find in historical accounts that leave us wondering whether dinosaurs might not actually exist in our very midst.
Posted by Jon Downes at 12:36 PM No comments: 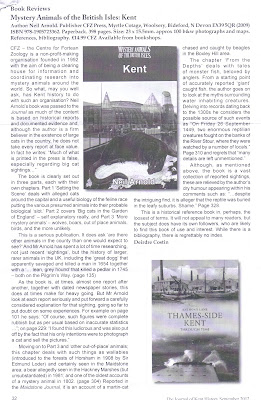 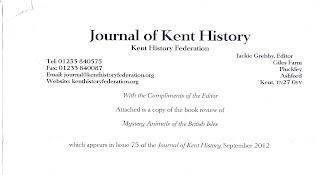 DALE DRINNON: A whole slew of posts at all Dale's blogs

JD: This gets a little complicated as I left off posts which should have gone up yesterday:

New on Frontiers of Anthropology

And New at The Frontiers of Zoology:
http://frontiersofzoology.blogspot.com/2012/10/latin-american-apes-again.html

Benny has a blog entry up on William Wilkerson And the Hollywood Trocadero:
http://benny-drinnon.blogspot.com/2012/10/william-wilkerson.html

New On Frontiers of Zoology:

New at Cedar and Willow:
http://cedar-and-willow.blogspot.com/2012/10/amberellas-and-galaxy-gals.html

Following yesterday's wholesome and uplifting story I have just received this photograph. Apparently Lee will meet his nemesis whilst dressed as Superman!

Corinna is home, as is mother and the two new Chinese toads. Even Prudence has stopped sulking. So we are back to normal. The CFZ exhibition in Barnstaple starts at the end of next week, the BBC have just interviewed me about the Loch Ness Monster, the lovely Jess Heard will be here imminently and Michael Des Barres has a new single out. Life as normal really...

Michael Des Barres: Amor Prohibido. God, this is brilliant. I heard this first the day after it was recorded, and I love it to death. Somehow it has even more power than the English language version. Check it out, and then go buy it at iTunes...http://gonzo-multimedia.blogspot.com/2012/10/michael-des-barres-new-single-remember.html

Our daily visit to the abode of Thom the World Poet. Today he takes us for a walk by Walk by ocean, river, desert
http://gonzo-multimedia.blogspot.co.uk/2012/10/thom-world-poet-daily-poem_10.html

As regular readers will know, I am very fond of the music of Cap[tain Beefheart and am not averse to using the excuse that there is a Beefheart volume in the Lost Broadcasts series as an excuse to post a link to a retrospective look at one of his classic albums.
http://gonzo-multimedia.blogspot.com/2012/10/link-40-year-itch-captain-beefheart.html

I am very fond of Helen McCookerybook and I hope to be talking to her later today about various projects of hers. Today, however, I have half inched various bits from her blog about a new club she is starting. Herewith Club Artyfartle. I might even try and get a gig there myself..
http://gonzo-multimedia.blogspot.co.uk/2012/10/helen-mccookerybook-club-artyfartle.html

I found this video interview with Rick Wakeman's son Adam yesterday, and was so interested that I shamelessly used the fact that his dad is a Gonzodude to repost it here today.
http://gonzo-multimedia.blogspot.com/2012/10/classic-rock-rick-wakeman-fanpack.html

Whilst on the subject of things Wakemanesque, those jolly nice people at Classic Rock are putting out a Rick Wakeman fanpack based around the Journey to the Centre of the Earth album.
http://gonzo-multimedia.blogspot.co.uk/2012/10/classic-rock-rick-wakeman-fanpack.html

The Gonzo Daily is - as the name implies - a daily online magazine (mostly) about artists connected to the Gonzo Multimedia group of companies. But it also has other stuff as and when the editor feels like it. The Editor is an old hippy of 53 who - together with his orange cat - puts it all together from a converted potato shed in a tumbledown cottage deep in rural Devon. He is ably assisted by his lovely wife Corinna, his bulldog/boxer Prudence, and a motley collection of social malcontents. Plus.. did we mention the orange cat?
Posted by Jon Downes at 11:20 AM No comments:

On this day in 1971 London Bridge was reopened... in Lake Havasu City, Arazona in the United States of America. The bridge was sold by the city of London because it could no longer cope with the amount of traffic expected to cross over it, it was bought by Robert P. McCulloch as a tourist attraction for his planned city and transported in sections to the city where it would span a specially constructed canal. Although a nice bridge, rumour has it that the Americans originally thought they were buying the iconic Tower Bridge and only discovered their error far into the sale process. Whatever the truth they must have been happy with their purchase in the end as it attracted thousands of people to live in the newly built city and continues to be a big draw for tourists.
And now the news:
The TV movie “A Bridge Across Time” used the relocated London bridge as a plot device allowing the ghost of Jack the Ripper to be pitted David Hasselhoff in a battle of wits (The family friendly editorial policy of the blog prevents me from saying what kind of 'wits' exactly but it begins with the letter 'F') :
http://www.youtube.com/watch?v=hUW9hr4jb3g
Posted by Jon Downes at 11:19 AM No comments: