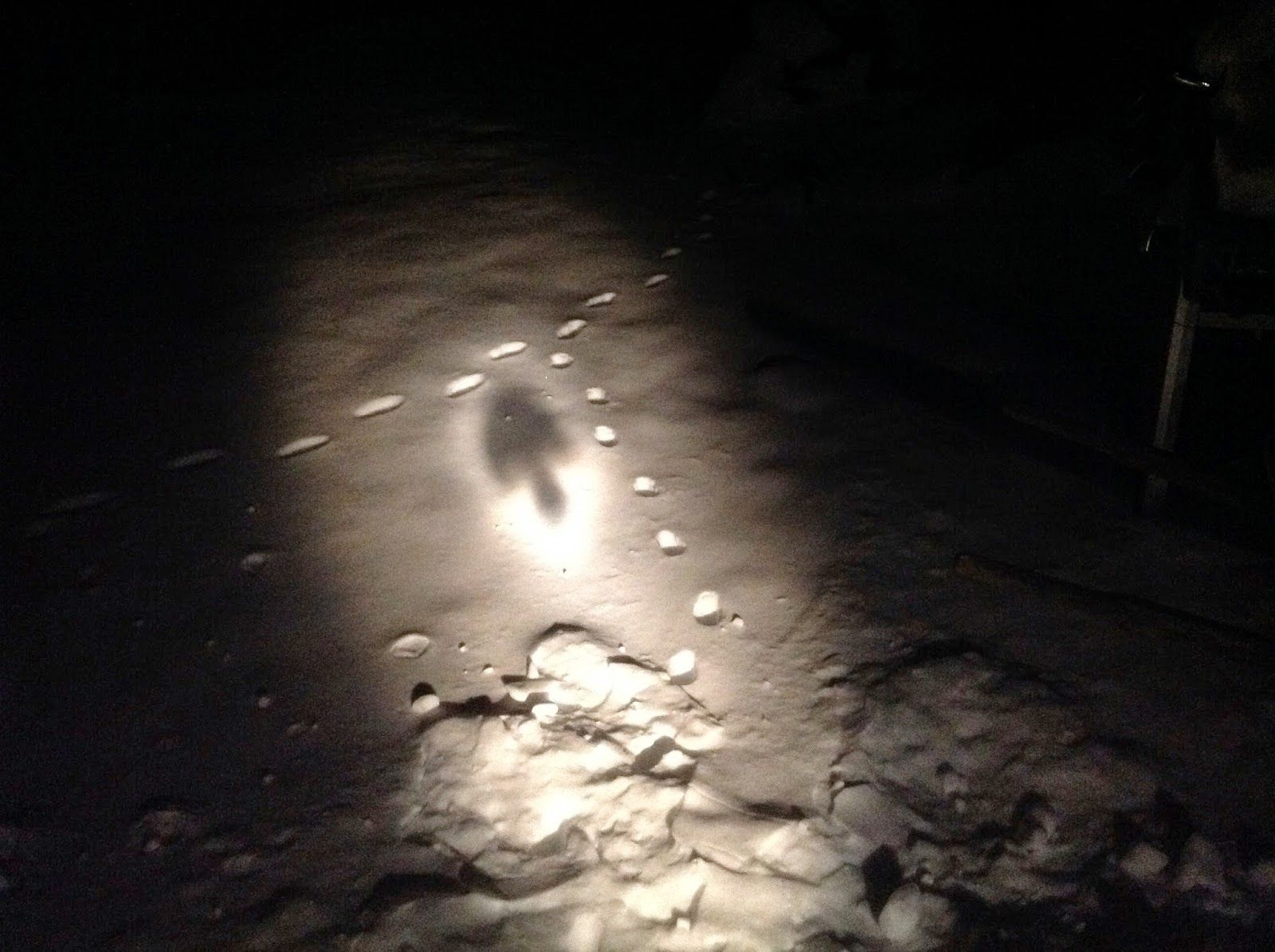 Back at the end of January I received this letter from Amy Bewley.

I am hoping you can explain the strange tracks we found in the snow outside of our home tonight.  My name is Amy Bewley and I live in Warwick, Rhode Island (USA) As you can see from the photo below, they appear to be two separate single tracks coming together as one single track (or vice versa) Any explanation would be greatly appreciated!

In fact, I didn’t.  On 24th January Amy sent it to me, and somehow it ended up in my spam filter.  The long and the short of it, however, is that I haven’t a clue how what made these tracks.  So, at the risk of sounding like a post-psychedelic Esther Rantzen, I am throwing the question over to you, the CFZ readership.
Posted by Jon Downes at 7:45 PM No comments:

bigfootlunchclub.com
While most of the crisis situation centered around an unexpected bombing at a public event, the day started with a report of a Bigfoot being captured

blogspot.com
Like I said yesterday, Bigfoot Festival season is upon us! Everyone is getting pumped for the 26th annual Ohio Bigfoot Conference happening this ...

ambrosekane.com
They think Roger Patterson and Bob Gimlin somehow conspired to fool the public into thinking they had filmed a genuine Bigfoot when, in fact, they ...

flickr.com
An unusual (but well circulated) photo of a purported dead Bigfoot has been discovered to have been taken over 100 years ago. According to Bigfoot ...

blogspot.com
Being that the festival is in Washington state it is close to areas with reported Bigfoot activity. Which is kinda nice if you want to do some Squatchin' ...

Breaking Bigfoot News: Close Encounter of the 'Yowie' Kind | Alternative - Before It's News

*  Jon Downes, the Editor of all these ventures (and several others) is an old hippy of 54 who - together with an orange kitten named after a song by Frank Zappa puts it all together from a converted potato shed in a tumbledown cottage deep in rural Devon which he shares with various fish, and sometimes a small Indian frog. He is ably assisted by his lovely wife Corinna, his bulldog/boxer Prudence, his elderly mother-in-law, and a motley collection of social malcontents. Plus.. did we mention the orange kitten?
Posted by Jon Downes at 11:59 AM No comments:


Karl Shuker inspects - from a cautious distance! - the curious crypto-case of the exploding worm of Kalmykia.

On this day in 1731 Daniel Defoe died. Defoe was a journalist, geographer, travel writer and spy but is best remembered for his novels “Robinson Crusoe” and “Moll Flanders”.
And now the news:


Time for a story:

http://www.youtube.com/watch?v=6iQBVuFg9m8
Posted by Jon Downes at 9:58 AM No comments: