THE HUNT FOR MYSTERY BEASTS TAKES A TORTUOUS TURN

Entering `Mystery Beast` into the youtube search engine elicits the news that there is a Japanese boy band called Beast who have a song called 'Mystery`. It is suitably horrible. Will wonders never cease? 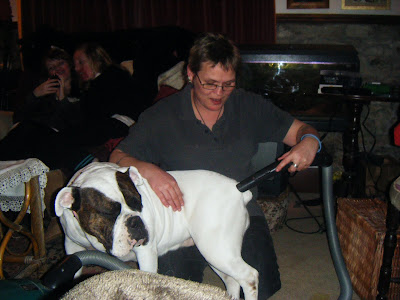 Welcome to the old Devonshire custom of hoovering the dog. Whenever Helen comes to do the hoovering, Prudence insists on being hoovered too...
Posted by Jon Downes at 11:58 AM 1 comment:

Where are missing mammals rediscovered?

Aim: To determine where mammals that are presumed to be extinct are most likely to be rediscovered, and to test predictions of two hypotheses to explain trajectories of decline in mammals. Range collapse is based on
the premise that extinction rates at the edge of species ranges are highest because habitat is suboptimal, so declining species are predicted to survive longer near the centre of their ranges. We predicted that under
range collapse, remnant populations are most likely be rediscovered within their former core range. Conversely, if threats usually spread across ranges, declining species will be pushed to the periphery (range eclipse),
so rediscoveries are predicted at the edge of the pre-decline range. If so, species would be more likely to be rediscovered in marginal habitat, and at higher elevations than the sites from which they disappeared.

Methods  Using data on 67 species of mammals which have been rediscovered, I tested whether species were disproportionately rediscovered in the outer 50% of their former range area or at higher elevations than their last recorded locations, and which species characteristics were associated with rediscovery location and habitat
change, using both the phylogenetic generalized least squares method to account for phylogenetic non-independence and linear models of raw species data.

The second issue of the Global Re-introduction Perspectives series, released by the International Union for the Conservation of Nature (IUCN), contains 72 case studies on reintroduction efforts for the following taxa: invertebrates (9), fish (6), amphibians (5), reptiles (7), birds (13), mammals (20) and plants (12).


For link to PDF file of the update.
Posted by Jon Downes at 11:47 AM No comments:

On this day in 1964 film director Gore Verbinski was born. Verbinski is best known for Pirates of the Caribbean 1-3 and the American remake of The Ring.
And now, the news:

Other things jumping in a boat:
http://www.youtube.com/watch?v=JBb9OgKH4Yk
Posted by Jon Downes at 11:45 AM No comments: