CRYPTOLINK: In Search of… the Sea Snake

In October 1845 British geologist Charles Lyell was visiting Boston, when he noted an advertisement proclaiming that a “Dr.” Albert C. Koch would exhibit the 114 foot long skeleton of “that colossal and terrible reptile the sea serpent” to the paying public. Lyell dismissed this claim soon as a fraud , as the skeleton was in fact from the extinct whale species Zeuglodon, described by Richard Owen just some years before.

Fig.1. The infamous “Hydrarchos” by German fossil collector Albert Koch as displayed in New York. Not only was the fossil animal composed of various specimens of the extinct whale Zeuglodon, but in this illustration even the size of the supposed skeleton is exaggerated.  Image from FOWLER (1846): “The American Phrenological Journal and Miscellany”, image in public domain.
Like many other Victorian naturalists Lyell showed great interest in the supposed existence of large marine monsters. A good friend of Lyell, Canadian geologist John William Dawson, informed him of  a sighting in August 1845 at Merigomish, in the Gulf of St. Lawrence. Here two “intelligent” testimonies had observed a 100 foot long sea snake with humps on the back and the head similar to a seal. Lyell describes this sighting in his book “Second Visit to the United States of North America” (1849) and adds that stories about unusual encounters abound along the west coast of the U.S. He mentions even that a young sea serpent was still preserved in spirits in the Museum of New Haven. However Lyell, seeing the specimen for himself, agreed with other skeptics that it was nothing more than a land snake (Coluber constrictor) with a deformed spine.

Fig.2. Newspaper from Boston with an article about the strange, but true, encounter with the  – a sea snake in 1817 (image in public domain).
Despite the lack of evidence, Lyell confess in his writings that he remained optimistic “for I believed in the sea serpent without having seen it.” Lyell’ s interest in sea snakes was strongly influenced by his passion for geology.
Read on...
Posted by Jon Downes at 1:04 PM No comments:

SHADOWS ON THE SEA: THE MARITIME MYSTERIES OF BRITAIN 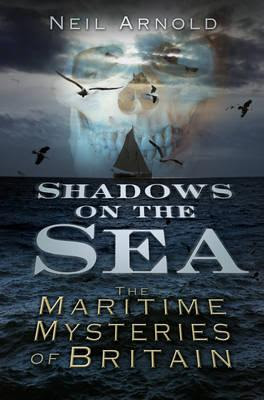 
Ever wondered just what strange things lurk in the cold depths of Britain’s foaming seas? Ever taken the time to peek down into those grey waters as you’re fishing, or skinny-dipping off a rugged coastline?


Now, for the first-time ever Britain’s underwater domain can be viewed in a different light as monster-hunter Neil Arnold takes us hundreds, if not thousands of metres beneath the sea in the hope of finding out if those seafaring tales of monsters and mysterious manifestations are true. Do strange beasts resembling serpents inhabit those inky depths? What of those old folktales concerning mermaids - mere superstition or fact?


Fisherman have long spoken of “the one that got away” but what of those seemingly tall stories that speak of haunted boats and phantom vessels – ships believed to have been wrecked many years previous on harsh coastlines, only to reappear on the horizon with tatty sails unmoved by the wind. Can we truly believe the stories told by witnesses of spectral sailors and ghostly crewmen aboard ships that have not seen action for decades? And can we discount those even stranger tales where those aboard great ships and smaller boats too, have reported seeing unusual lights emerge from, and enter the frothing waters?


Forget Peter Benchley’s classic novel Jaws, SHADOWS ON THE SEA – THE MARITIME MYSTERIES OF BRITAIN is a real-life exploration in search of those horrors of the deep that you dismissed (or believed in!) for years.


SHADOWS ON THE SEA (which includes a foreword by Jonathan Downes of the Centre for Fortean Zoology) covers all manner of British maritime mysteries, so, just when you thought it was safe to go back in the water – it isn’t!


Available from all good bookshops and online. Priced £12.99
Posted by Jon Downes at 12:30 PM No comments:

My last day at the CFZ was fairly uneventful. We got quite a way through the Eberhart book, for which, I tried to insist on pictures that made the creatures look cute rather than scary. My attempts were only somewhat successful.

This work was broken up only by the occasional wander into the garden to look at review the progress of the hole being dug for the pond, by Matt and Jess. There were many threats from Jon to throw each of us in into it.

We finished early today so that I could get everything ready for a day’s travel back up to York tomorrow, which, by the way, is scheduled to take about seven and a half hours. Finishing early means no cat hunt, so it will be several months before I get to go on another one.
During my previous trip down, last October, it was agreed all round that I fitted in surprisingly well to a rather odd situation. Over this last week, I have assimilated even further and have been told that I am now part of the CFZ family, which I feel really is the case. What fitting into such a strange place says about me exactly,  remains to be seen.
Posted by Jon Downes at 12:27 PM No comments:

THE GONZO BLOG DOO-DAH MAN CHASES HIS OWN TAIL

I woke up late with a slight hangover

*  Jon Downes, the Editor of all these ventures (and several others) is an old hippy of 53 who - together with his orange cat (who is currently on sick leave in Staffordshire) and his new orange kitten puts it all together from a converted potato shed in a tumbledown cottage deep in rural Devon which he shares with various fish. He is ably assisted by his lovely wife Corinna, his bulldog/boxer Prudence, his elderly mother-in-law, and a motley collection of social malcontents. Plus.. did we mention the orange cats?
Posted by Jon Downes at 12:24 PM No comments:

On this day in 1929 Gerry Anderson was born. Anderson is best remembered for his puppet based children's science fiction shows like Thunderbirds, Stingray and Captain Scarlet.
And now the news: