LINK: The Story of Coco the Coconut Crab

The story of Coco the Coconut Crab, authored and illustrated by Shelly Kremer, is based on the Chamorro legend of Naabak. If you follow Naabak (fantail) in the forest, you will become forever lost. The natural history of the animals found on Saipan is integrated into the story line....monitor lizards really do lounge in the sun, partula snails really do bear live young, megapodes really do bury their eggs in the volcanic soil, and fruit bats really do live in colonies flying out at night to eat fruit and drink nectar from the flowers. So come follow Coco on her journey as she searches for her home.
Purchase the Book

http://www.micronesicabirdconservation.org/coco-the-coconut-crab.html
Posted by Jon Downes at 2:34 PM No comments:

Email ThisBlogThis!Share to TwitterShare to FacebookShare to Pinterest
Labels: cryptofiction

CARL PORTMAN: Can you tell me what THIS is? 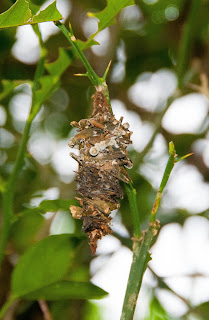 Yes it’s me, fresh back from a jungle jaunt in Costa Rica – and what an experience THAT was. I attach something that you might like to share on the web site. The (rhetorical) question for all is ‘what is it?’

Carlos (a Howler Monkey’s best mate and a man who wears another man’s clothes for four days)
Posted by Jon Downes at 2:28 PM 1 comment:

MUIRHEAD`S MYSTERIES: A WINGED CROCODILE IN 1698

The other day I found the following account, dating from 1698, of a winged crocodile on the southern tip of . It`s from the Flying Post Master or The Post , July 19th 1698:

June 24th We hear that a Sea Monster, resembling a Crocodile, hath been seen lately on the shore near , but escaped when the Mariners went to attack it.

Later: (I mean further down the same page, though earlier in the month…)

A Sea-Monster was seen near Cape St Vincent with four Feet, was about 20 Foot in length, and had two great Wings, covered over with black shining Scales, with which it made a mighty Noise. The rest of the Body was the colour of a Whale.
Posted by Jon Downes at 2:27 PM No comments:

Posted by Andrew May at 2:25 PM No comments:

My dear nephew Dave B-P is here carrying out the latest assault on my antiquated telephone lines. Even more amazingly, by firing off a barrade of tech talk at the fellows in the BT Call Centre, he managed to get them to admit that there actually IS a problem with the line, and that they are going to do something about it. What that `something` is remains to be seen.

*  Jon Downes, the Editor of all these ventures (and several others) is an old hippy of 53 who - together with his orange cat (who is currently on sick leave in Staffordshire) puts it all together from a converted potato shed in a tumbledown cottage deep in rural Devon which he shares with various fish. He is ably assisted by his lovely wife Corinna, his bulldog/boxer Prudence, his elderly mother-in-law, and a motley collection of social malcontents. Plus.. did we mention the orange cat?
Posted by Jon Downes at 11:44 AM No comments:

On this day in 2011 American actor and voice artist Kenneth Mars died. Mars stared in several Mel Brooks comedies, but was best known as the voice of King Triton in Disney's “The Little Mermaid” films and in the Kingdom Hearts games.


Kenneth Mars in the Producers:
https://www.youtube.com/watch?v=AIZKZ3C1ML8
Posted by Jon Downes at 11:43 AM No comments: