CRYPTOZOOLOGY ONLINE: On The Track (Of Unknown Animals) Episode 38

The latest edition of a monthly webTV show from the CFZ and CFZtv, bringing you the latest cryptozoological and monster-hunting news from around the world. 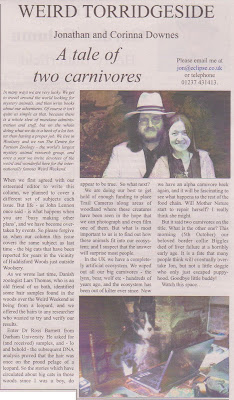 On December 24 1996 a carcass washed up on beach villa Rico near the town of Claveria, located in the Philippine province of Masbate. According to press reports the animal's body resembled an 26-foot-long eel-like creature with the head of a turtle. A photo of the skull, vertebrae and limbs appeared in the newspaper Philippine Star, but this photo is not available. The photograph was presented together with dried meat to unnamed "experts" and no one could identify it. Zoologist Dr Perry Ong of the Philippines University confirmed that it was "a eel-like fish...It must be an ancestral or primitive fish. It had fins. But if it is a fish, where are the ribs? It is not a mammal." The skull had obviously a blowhole-like opening, resembling that of a dolphin, but it lacked the corresponding long, narrow snout. Cryptozoologist Karl Shuker speculated it could probably be an already heavily decayed killer whale (Orcinus orca).

The description of a blowhole-like opening in the skull, however, reminded me at once to the epiphysal foramen, a round hole in the top of basking shark skulls (Cetorhinus maximus) through which a brain projection, the epiphysis or pineal body, extends. Because of this speculation, it was first necessary to determine whether the range of the basking shark includes the Philippines. And precisely during this search was quickly and completely unexpectedly the Masbate monster met again! Fishbase reports about the basking shark: "First record from Philippines: skeletal remains washed up on shore in Iceland Burias, Masbate." Unfortunately there was no date of this report, but the source was specified: Compagno, LJV, Last, PR, Stevens, JD & Alava, MNR (2005) Checklist of Philippine Chondrichthyes. CSIRO Marine Laboratories Report. This report is, fortunately, available online, and there you can read: "First record from the Philippines.. Burias Iceland, Masbate, December 1996, skeletal remains including vertebrae and Clasper washed up on beach. Identification The Philippines Star, March 9th: 1997 Victor G. Springer, pers comm."


Another sea monster carcass whose identification unfortunately remained open
until now can thus be put to file.

Humans create ideas to explain natural phenomenon. Most of these explanations are worth little more than the cinders that Beachcombing nightly sweeps up from the fire. These explanations are then superseded by other explanations – that typically bear as little relation to truth – and so knowledge marches heroically on… Inevitably, though some branches of humanity can’t keep up – memos from central office cease to get through - and these relicts cling quaintly to the ideas of yesterday.

Email ThisBlogThis!Share to TwitterShare to FacebookShare to Pinterest
Labels: swallows

1. Tetrapod Zoology Book One by Dr Darren Naish (10)
2 The Great Yokai Encyclopaedia by Richard Freeman (1)
3=. Karl Shuker's Alien Zoo by Dr Karl Shuker (-)
3=. The Monsters of Texas by Ken Gerhard and Nick Redfern (2)
5=. The Owlman and Others by Jon Downes (-)
5=. Big Bird by Ken Gerhard (7)
5=. Ufo Down - The Berwyn Mountains UFO Crash by Andy Roberts (5)
8. Extraordinary Animals Revisited by Dr Karl Shuker (6)
9=. The Mystery Animals of Ireland by Gary Cunningham and Ronan Coghlan (-)
9=. In the wake of Bernard Heuvelmans by Michael Woodley (-)


Last month's positions in this pinky colour, which I think is called cerise. The charts this month have been dominated by the Darren Naish and the other newish releases. If Alien Zoo had been released earlier in the month I think that it would have done equally well. Here's looking forward to the Christmas sales figures.
Posted by Jon Downes at 10:58 AM No comments:

OLL EXPLAINS IT ALL

While we are waiting for more news from the India expedition, who will have reached the location for their investigations at about tea time (GMT yesterday, we thought it might be a nice idea to have Oll tell us a little about the Garo Hills.
Posted by Jon Downes at 10:50 AM No comments:

On this day in 1957 the USSR launched Sputnik 2. On board was a dog named Laika, the first animal to orbit the planet. Sadly Laika died during the mission from overheating and there had never been any mechanism aboard the satellite to enable her to return safely to Earth.
And now, the news:

A Russian news report (in English) from the 40th anniversary of her mission:
http://rt.com/prime-time/2007-11-03/Russia_remembers_Laika_the_space_dog_.html
Posted by Jon Downes at 10:46 AM No comments: