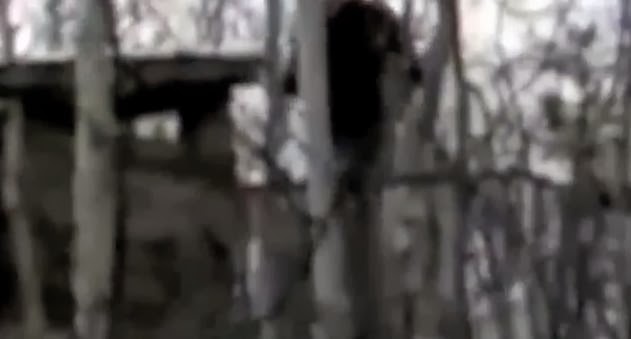 This footage surfaced a few years ago, and Adam Bird just reposted it on YouTube. The defunct group, FB/FB, estimated the height of the creature to be around 8ft tall.

GOODNESS ME IT'S THE GONZO BLOG DOO-DAH MAN

www.gonzomultimedia.co.uk/about.html
The house always seems very empty when the kids have gone home. I never expected to be a family man and so I never knew how much I would enjoy it. Shosh and Gavin went home to Staffordshire yesterday evening. I spent most of the evening working on Gonzo Weekly, which will be out later today. I then sat down and watched documentaries on The Doors and Jimi Hendrix on BBCi Player. I hadn't realised that Elvis's bass player was on LA Woman, and it was nice to see the archive film of the band in action, but it was the Hendrix documentary that was the real eye-opener. I had never seen the full Woodstock set before, and was always under the impression that he had baffled the crowd with a plethora of unreleased material. Not so. He played a shoddy greatest hits set rather badly, with an under-rehearsed and rather messy band. Even the much touted 'Star Spangled Banner' was nowhere near as impressive when heard as a coda to a very lacklustre version of 'Voodoo Chile'. OK I was somewhat in my cups, but I was rather underwhelmed by the whole thing.
Another visit to our old friend Thom the World Poet
http://gonzo-multimedia.blogspot.com/2014/01/thom-world-poet-daily-poem_18.html
Today's Track of the Day is by Frank Zappa
http://gonzo-multimedia.blogspot.com/2014/01/the-gonzo-track-of-day-frank-zappa.html
Sky Architect review
http://gonzo-multimedia.blogspot.com/2014/01/sky-architect-review.html
JOEY MOLLAND: RTM Polish review translated
http://gonzo-multimedia.blogspot.com/2014/01/joey-molland-rtm-polish-review.html
Brand X review
http://gonzo-multimedia.blogspot.com/2014/01/brand-x-review.html
As I said, Gonzo Weekly will be out later today. This issue contains the legendary Merrell Fankhauser reminiscing about Captain Beefheart and an encounter with the Manson Family, what happened when Michael Des Barres met the 'Hendrix of the Cello', a new album for Yes, a look at the legendary 'Lamb lies down on Broadway' album by Genesis, unpublished photographs showing Liz Lenten as some sort of superhero, exciting news for Hawkwind fans, and columns by C J Stone and Doug Harr. There is the new XNA video and a photograph of Archie the Jack Russell dressed as Sherlock Holmes. There is also more news, reviews, gossip and general rambling than you can shake a stick at! Subscribe now, and make an ageing editor very happy. It is absolutely free. http://eepurl.com/r-VTD
http://gonzo-multimedia.blogspot.com/2014/01/coming-later-today.html

*  Jon Downes, the editor of all these ventures (and several others), is an old hippy of 54 who - together with his orange cat (who is currently on sick leave in Staffordshire) and two very small kittens (one of whom is also orange) - puts it all together from a converted potato shed in a tumbledown cottage deep in rural Devon, which he shares with various fish and sometimes a small Indian frog. He is ably assisted by his lovely wife Corinna, his bulldog/boxer Prudence, his elderly mother-in-law and a motley collection of social malcontents. Plus...did we mention the orange cat?
Posted by Jon Downes at 1:28 PM No comments:

On this day in 1882 the author A. A. Milne was born. Although best known for his Winnie the Pooh stories, Milne also wrote poetry, humour and detective fiction.
And now the news:

The Russian take on Winnie the Pooh is truly nightmareish: