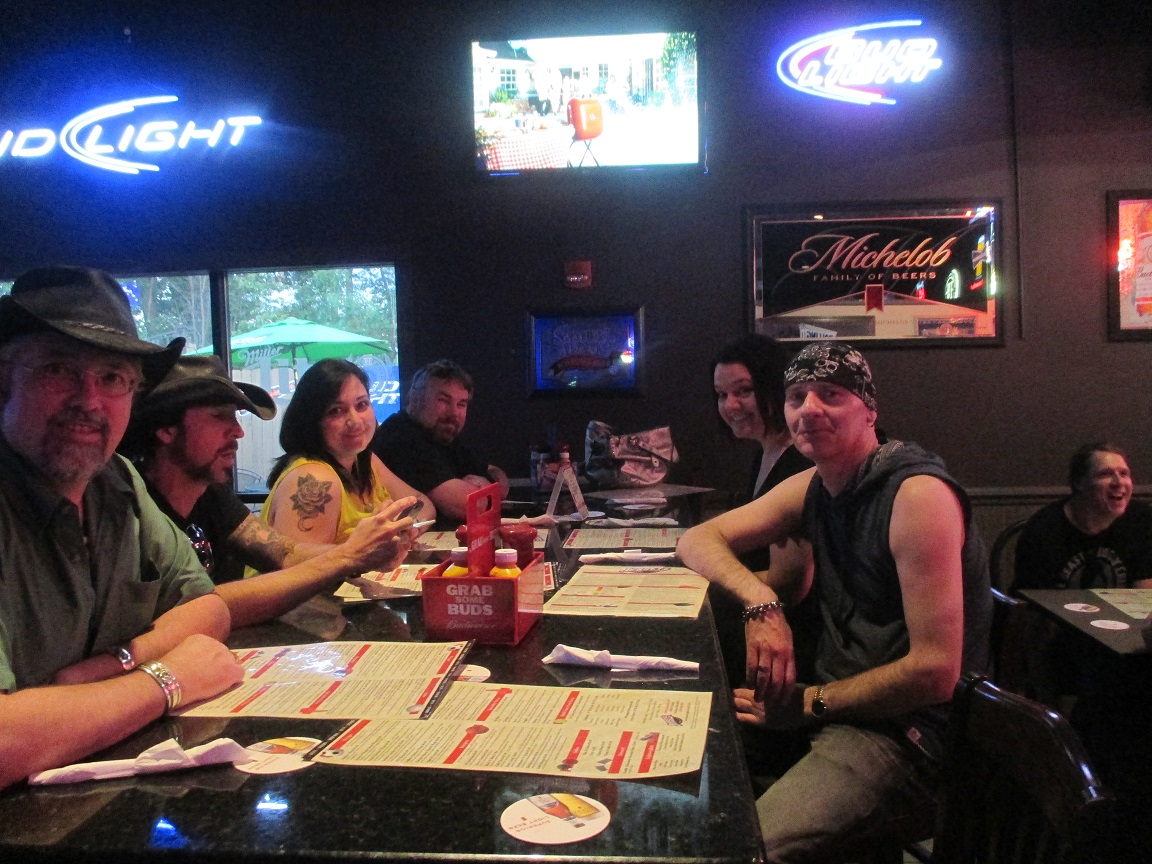 Boat Company Insures Fleet Against Loch Ness Monster Damage
Dailymotion
It may be one of the weirdest insurance policies ever, but Jacobite Cruises, a boat company that operates on Loch Ness in Scotland insured their fleet ...

Strange Hair And Possible Bigfoot Tracks Discovered
Bigfoot Evidence - Blogger
The Rocky Mountain Sasquatch ORganization makes some discoveries off the beaten path. They come across some huge
Posted by Jon Downes at 3:19 PM No comments:

THE GONZO BLOG DOO-DAH MAN AT THE GATE

http://www.gonzomultimedia.co.uk/about.html
Another Friday, and another issue of the magazine is in production. Whether it will be up tonight or tomorrow remains in the lap of the sods... But far more importantly many congratulations to Shoshannah who has made me an even prouder stepfather than usual today by gaining a prestigious qualification in Feline medicine. Well done baby.
find out all about the Weird Weekend
http://www.weirdweekend.org
buy tickets to the Weird Weekend:
http://tinyurl.com/jnke
And now for the news................
THE GONZO TRACK OF THE DAY: The Beatles "Help" Li...
http://gonzo-multimedia.blogspot.co.uk/2016/08/the-gonzo-track-of-day-beatles-help.html
COMING THIS WEEKEND
http://gonzo-multimedia.blogspot.co.uk/2016/08/coming-this-weekend_12.html
Metal Gods TV - Crazy World of Arthur Brown interv...
http://gonzo-multimedia.blogspot.co.uk/2016/08/metal-gods-tv-crazy-world-of-arthur.html
THOM THE WORLD POET: The Daily Poem
http://gonzo-multimedia.blogspot.co.uk/2016/08/thom-world-poet-daily-poem_12.html
Billy Cobham: Exclusive Interview - in conversatio...
http://gonzo-multimedia.blogspot.co.uk/2016/08/billy-cobham-exclusive-interview-in.html
Gonzo Magazine #194
http://www.gonzoweekly.com/
We interview the lovely Liz Lenten from Auburn, Doug goes to see Adele, John goes to Alaska to watch whales and goes to see the Crazy World of Arthur Brown in the meantime. Alan goes to Kozfest, Jeremy goes to see Blue Oyster Cult, Jon muses on unreleased Pink Floyd and reviews a book by Bill Drummond.  Truly this is a massively groovy magazine!
And there are radio shows from Strange Fruit, Mack Maloney, and Friday Night  Progressive. We also have columns from all sorts of folk including Roy Weard, Mr Biffo, Neil Nixon and the irrepressible Corinna. There is also a thrilling and slightly disturbing episode of Xtul. There is also a collection of more news, reviews, views, interviews and pademelons outside zoos(OK, nothing to do with small marsupials who have escaped from captivity, but I got carried away with things that rhymed with OOOOS) than you can shake a stick at. And the best part is IT's ABSOLUTELY FREE!!!
This issue features:
Pink Floyd, Bob Dylan, The Rolling Stones, The Beatles, RAZ Band, Viv Stanshall, biG GRunt, Ringo Starr, U2, Elton John, Peter Hook, Joy Division, Ozzy Osbourne, Jack Osbourne, AC/DC, Strange Fruit, Friday Night Progressive, Mack Maloney's Mystery Hour, Elliot Teichberg (Elliott Tiber), Leslie Hulme (Ken Barrie), The Boomtown Rats, Karnataka, Rick Wakeman, Liz Lenten, Auburn, Adele, Alan Dearling, Kozfest, The Trolleymen, Tea Project, Fijian, Mike Howlett, Cary Grace, Phaselock, Sendelica, Hawklords, Sacred Geometry Band, Gong, John Brodie-Good, The Crazy World of Arthur Brown, Jeremy Smith, Blue Oyster Cult, Mr Biffo, Roy Weard, Hawkwind, Xtul, Bill Drummond, Spectrum, It Flew Away, Capt. Matchbox & Langford Lever, Jack White, The Grateful Dead, Neil Nixon, Dame Barbara Cartland
Read the previous few issues of Gonzo Weekly:
Issue 193 (Genre Peak)
http://www.flipsnack.com/9FE5CEE9E8C/gonzo192.html
Issue 192 (Rick Wakeman and Brian May)
http://www.flipsnack.com/9FE5CEE9E8C/gonzo192.html
Issue 191 (Karnataka)
http://www.flipsnack.com/9FE5CEE9E8C/gonzo191.html
Issue 190 (Erik Norlander)
http://www.flipsnack.com/9FE5CEE9E8C/gonzo190.html
Issue 189 (Rick Wakeman at the O2)
http://www.flipsnack.com/9FE5CEE9E8C/gonzo189.html
Issue 187/8 (Yer holiday special)
http://www.flipsnack.com/9FE5CEE9E8C/gonzo187-8-the-summer-holiday-special.html
Issue 186 (Beatles)
http://www.flipsnack.com/9FE5CEE9E8C/gonzo186.html
Issue 185 (Judge Smith)
http://www.flipsnack.com/9FE5CEE9E8C/gonzo185.html
Issue 184 (Mick Abrahams)
http://www.flipsnack.com/9FE5CEE9E8C/gonzo184.html
All issues from #70 can be downloaded at www.gonzoweekly.com if you prefer. If you have problems downloading, just email me and I will add you to the Gonzo Weekly dropbox. The first 69 issues are archived there as well. Information is power chaps, we have to share it!
You can download the magazine in pdf form HERE:
http://www.gonzoweekly.com/pdf/
SPECIAL NOTICE: If you, too, want to unleash the power of your inner rock journalist, and want to join a rapidly growing band of likewise minded weirdos please email me at jon@eclipse.co.uk The more the merrier really.
* The Gonzo Daily is a two way process. If you have any news or want to write for us, please contact me at jon@eclipse.co.uk. If you are an artist and want to showcase your work, or even just say hello please write to me at gonzo@cfz.org.uk. Please copy, paste and spread the word about this magazine as widely as possible. We need people to read us in order to grow, and as soon as it is viable we shall be invading more traditional magaziney areas. Join in the fun, spread the word, and maybe if we all chant loud enough we CAN stop it raining. See you tomorrow...
* The Gonzo Daily is - as the name implies - a daily online magazine (mostly) about artists connected to the Gonzo Multimedia group of companies. But it also has other stuff as and when the editor feels like it. The same team also do a weekly newsletter called - imaginatively - The Gonzo Weekly. Find out about it at this link: www.gonzo-multimedia.blogspot.co.uk
* We should probably mention here, that some of our posts are links to things we have found on the internet that we think are of interest. We are not responsible for spelling or factual errors in other people's websites. Honest guv!
* Jon Downes, the Editor of all these ventures (and several others) is an old hippy of 56 who - together with an infantile orange cat named after a song by Frank Zappa, and two small kittens, one totally coincidentally named after one of the Manson Family, purely because she squeaks, puts it all together from a converted potato shed in a tumbledown cottage deep in rural Devon which he shares with various fish. He is ably assisted by his lovely wife Corinna, his bulldog/boxer Prudence, his elderly mother-in-law, and a motley collection of social malcontents. Plus.. did we mention the infantile orange cat, and the adventurous kittens?
Posted by Jon Downes at 3:13 PM No comments:

ON THIS DAY IN - 1865 - Disinfectant was used for the first time during surgery by Joseph Lister.
And now some more recent news from the CFZ Newsdesk