CFZ IN THE NEWS

A Westcountry-based organisation with a worldwide following last night announced that it has two crucial elements of proof which confirm the belief that big cats live in the region – and that they have done so for at least a century.

The Centre for Fortean Zoology (CFZ), based at Woolfardisworthy, is staging its annual conference this weekend and organisers kicked off proceedings by unveiling evidence that they claim proves big cats were running wild in Devon over 100 years ago – and that they are still here today.

Email ThisBlogThis!Share to TwitterShare to FacebookShare to Pinterest
Labels: cfz 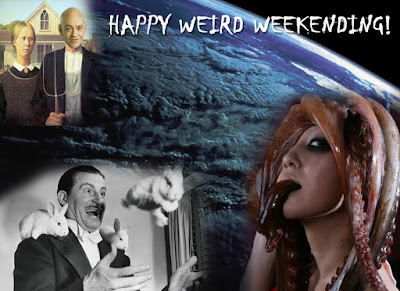 Posted by Jon Downes at 9:39 AM No comments:

Posted by Jon Downes at 9:37 AM No comments:

Today was the last day of the 2011 Weird Weekend and it kicked off with a fantastic talk by Glen Vaudrey on the Water Horse. The Water Horse has fascinated me for some time and it was very interesting to hear about the Scottish folklore surrounding the beast, which I could compare to the Welsh folklore I grew up with. Ronan was, as ever, the last talk before Jon’s address and produced a fantastically entertaining talk as always, this time recreating the Labours of Hercules.

In Jon’s address he announced publicly that the CFZ are putting together a new pier-reviewed journal on cryptozoology. This should, as all the reviewers of papers for the journal are respected academics, answer critics who think cryptozoology is a waste of time.

The evening saw the dinner at the Farmers Arms and after which Richard, Perry, Nadia, Mark, Darren and John Hare discussed such diverse subjects as serial killers and the Japanese Porygon panic. Same time next year I hope. OLL LEWIS

On this day in 565AD St Columba reported seeing a creature in Loch Ness, this is widely regarded as the first recorded sighting of the Loch Ness Monster (although the sighting actually happened on the River Ness and may have been just a local witch).
And now the news:

And because of today’s anniversary and the last news story:
http://www.youtube.com/watch?v=obOXjhuz6MQ