Things get messy for Nessie as the scaffolders move in

Deadline News
THE LOCH Ness Monster faces months of broken slumber – as restoration work is set to start at one of the area's top viewing points. Urquhart Castle ...
Posted by Jon Downes at 1:43 PM No comments:

THE BEAST OF CORFU 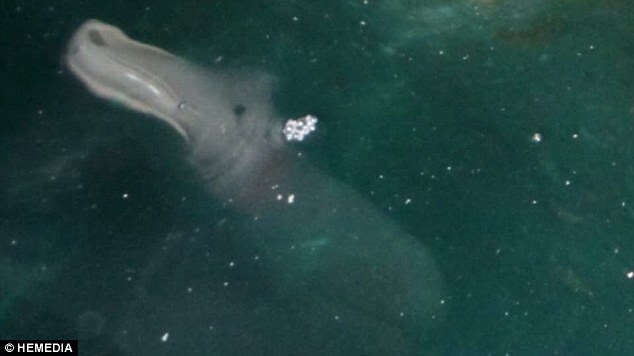 Today the Daily Mail published a story about a mysterious creature seen in a sea cave off Corfu. For those of you not in the know, this is a crescent shaped Greek island off the coast of Albania. You can read the original story here.

Unfortunately there is no scale so we cannot estimate size, and I have to admit that my gut feeling is that it is the foetus of some species of cetacean however, it could be argued that the semi-circular dark markings about a third of the way along the object are gill flaps which would make it some sort of fish.

What do you think?
Posted by Jon Downes at 12:00 PM No comments:

ufo real hd
Bigfoot Sightings 2015 Two young brothers find it amusing when something outside their bedroom window begins to mimic the sounds of their ...

Fact or Fiction: Bigfoot in the Ozarks Part 1
KSPR
The BFRO – the Bigfoot Research Organization is full of reported Bigfoot activity across the Ozarks. You can see the sightings in Missouri and ...

Rare Raw Footage Of Dr. Jeff Meldrum Talking About Bigfoot
Bigfoot Evidence
When we watch a bigfoot documentary, it's been fairly cleaned up and polished by the time it gets to us. Check out this raw footage of a bigfoot ...
Posted by Jon Downes at 11:00 AM No comments:

ON THIS DAY IN 1618 - Sir Walter Raleigh was beheaded under a sentence that had been brought against him 15 years earlier for conspiracy against King James I.
And now some more recent news from the CFZ Newsdesk