Disclose.tv
A real interview. A man gives testimony that he knows many secrets about Sasquatch, including an account of a great ape/human hybrid. He also may ...

Sasquatch Chronicles
The Paranormal Roads Podcast visit with a family that has an unusual problem. They seem to be plagued by on-going bigfoot activity around their ...
Posted by Jon Downes at 10:30 AM No comments: 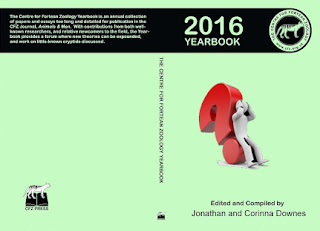 The eagle eyed amongst you will have noticed that there was no CFZ Yearbook this year. I intend to rectify this for 2016, and therefore, if you would like to submit an article for consideration, now is the time to do it.

The CFZ Yearbook has so far achieved 16 volumes. It has always been intended as a place for longer articles, papers, and expedition reports that are too big to fit into our quarterly journal Animals & Men. However, it is not peer reviewed in any meaningful sense of the word, except by me as editor. Thus, it fulfils an intermediate rule somewhere between that of Animals & Men and the Journal of Cryptozoology which is published by us and edited by Dr Karl Shuker.

Please do not hesitate to get into touch with me, either through Facebook or my email address: jon@eclipse.co.uk. I very much look forward to hearing from you.

Jon Downes
(Director, CFZ)
Posted by Jon Downes at 12:30 AM No comments:

ON THIS DAY IN 1867 - Alfred Nobel patented dynamite.
And now some more recent news from the CFZ Newsdesk