You may have noticed that I have been spectacularly elusive recently. I have an infected cyst on my chest, which will have to be cut out. It is the size of half a grapefruit, and is causing me some considerable pain. I am presently on some very-heavy duty antibiotics, which are making me feel quite unwell.

On a brighter note, David B-P has been working hard on the WW Lineup and running order and we hope to be able to issue both in the next few days....
Posted by Jon Downes at 12:29 PM 2 comments:

RICHARD FREEMAN: RHINOS KILLED ON AN UNPRECEDENTED SCALE IN AFRICA

Rhino conservation suffered a disastrous year in 2010 with over 333 rhinos being killed in South Africa alone; 323 whites and 10 blacks. It would seem that 2011 is shaping up to be bad as well. In May poachers chased a female white rhino off a cliff and then took her horn - the following day her calf was found lying next to its dead mother.

Poachers are now part of a criminal syndicate and come armed with helicopters, machine guns and powerful drugs. The police often know who is involved, but seem powerless to stop them. Out of spite, poachers often kill even those rhinos that have been de-horned by conservationists. All this for a keratin horn with no medical powers whatsoever beyond the backward superstitions of various people, mostly living in the Far East.

Now the army have been deployed. The South African National Defence Force (SANDF) have been asked by South African National Parks (SANParks) to play a strategic role in their protection, especially the Kruger National Park. The SANDF were deployed to the Kruger, where the park borders with Mozambique and Zimbabwe, at the beginning of April 2011. Hopefully, they will employ a shoot-to-kill policy with poachers. If a few of their helicopters are blasted out of the sky, others may become too frightened to take up poaching in the first place.

Meanwhile, in the Masai Mara game reserve in Kenya, two of the reserve’s three white rhinos have been poached despite supposedly being under 24-hour watch. The third rhino has since been moved to Nairobi National Park where he joined 11 others currently living there that were brought in last year, during a similar exercise from Lake Nakuru National Park. The translocation will enhance and increase the genetic breeding structure of the current rhino population at the park.

If rhinos are to be saved we need to be more proactive. We need sanctions on countries that deal in rhino horn. And the dealers should be targeted with extreme methods. Once again, this might induce such fear that no one would dare deal in rhino horn again. We can bang on about re-educating the misguided (or in other words evil, greedy, stupid) but so far it has done little good. If we cut out the dealers, there is no one to pay the poacher, and if we cut out the poachers, there is no one to kill the rhinos.
Posted by Jon Downes at 12:23 PM No comments: 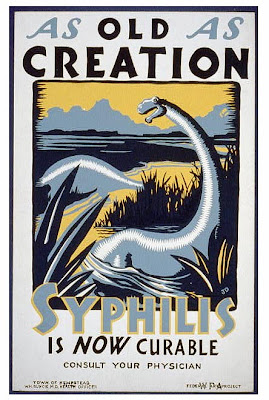 Is this poster saying that no matter how clean and attractive the brontosaurus looks, she might have venereal disease? Is something Freudian going on with those long necks? Both dinosaurs look seasick to me but the overall image is so appealing that I don't care if it makes sense.
Posted by Jon Downes at 12:14 PM No comments:

On this day in 1883 Krakatoa began to erupt.
And now the news:

A bit of M.L.P. for all the Bronies reading the blog today:
http://www.youtube.com/watch?v=eS0CtxWjhnw
Posted by Jon Downes at 12:05 PM No comments:

KARL SHUKER: FROM THE HOUND OF THE HEDGES TO CHIA DOGS! 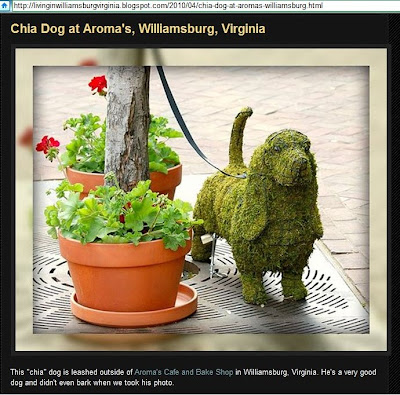 DOUG SHOOP SENT THIS FASCINATING PIECE ON AN ANIMAL CHIROPRACTOR

The Minnesota Legislature passed a law in 2008 permitting specially trained chiropractors to offer their services to animals. The state now boasts 22 licensed animal chiropractors. Reporter Nikki Tundel met up with Kyla Awes, a lifelong animal lover who adjusts the spines of horses, dogs, cats, and the occasional potbellied pig. 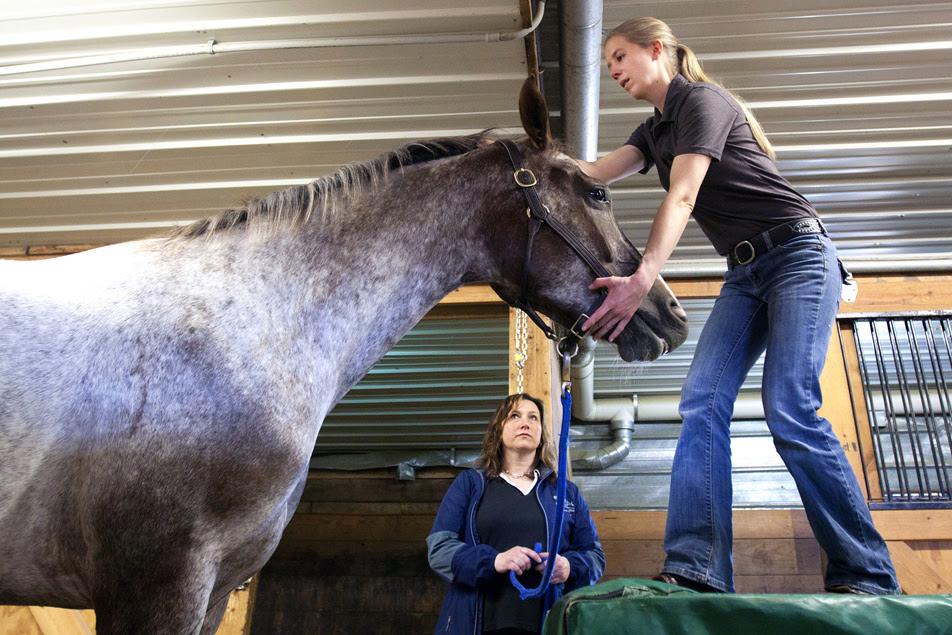 2 Maple Plain, MN, USA — Kyla Awes checks Lola's neck for any restriction of movement. Awes first studied to become a human chiropractor and received her Doctorate of Chiropractic degree from Northwestern Health Sciences University in Bloomington, Minn. She then studied at Options for Animals College of Animal Chiropractic in Wellsville, Kan., one of the few schools in the world devoted entirely to animal chiropractic. "There are differences in anatomy between humans and animals. But the adjusting is very similar. You can adjust anything that has a spine," says Awes. (MPR Photo/Nikki Tundel) 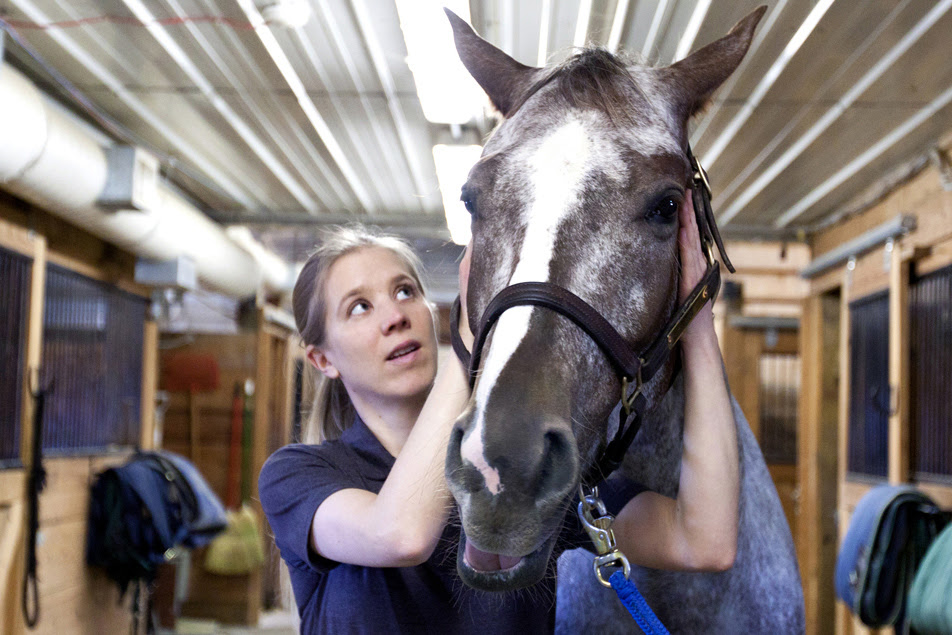 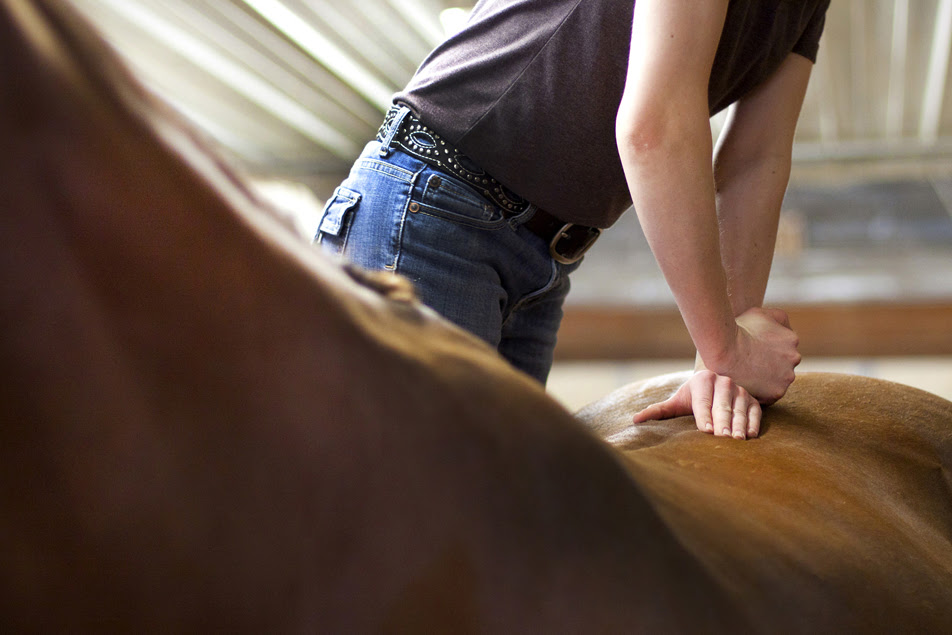 4 Maple Plain, MN, USA — Animal chiropractor Kyla Awes adjusts Lola's spine using a quick thrust to improve alignment. Many of Awes' clients are competition horses. "They're athletes," says Awes. "What I'm trying to do is help the animal be its best. This is a natural therapy with very few side effects. And this can make a really big difference in their performance." (MPR Photo/Nikki Tundel) 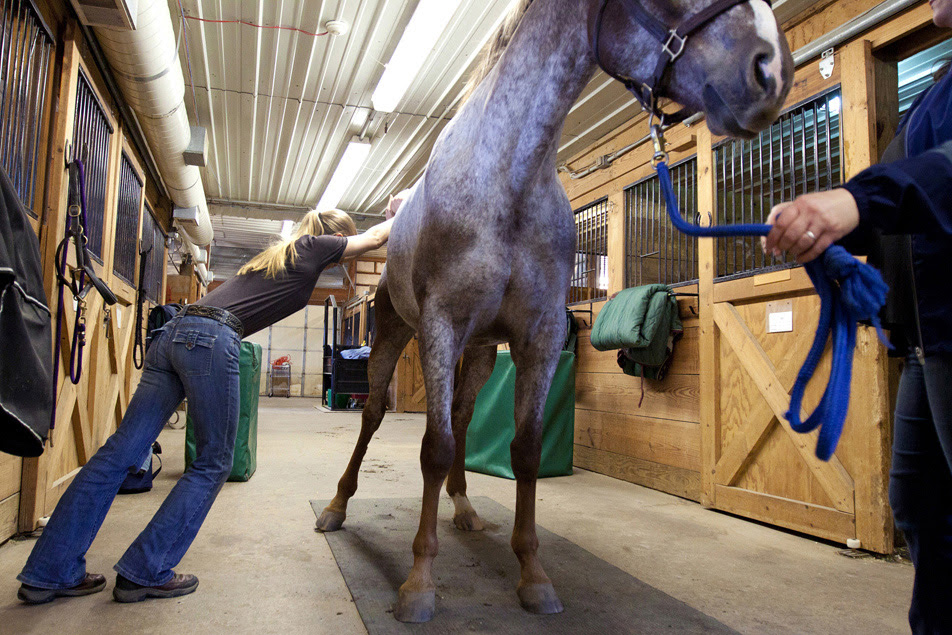 5 Maple Plain, MN, USA — Chiropractic treatments are often relaxing for horses. Many animals will yawn, sigh, or lick and chew during an adjustment. Here Lola, an American Warmblood, stretches her neck towards chiropractic assistant Stacy Sletten during her treatment. (MPR Photo/Nikki Tundel) 6 Prior Lake, MN, USA — When she's not working on horses, Kyla Awes treats dogs, cats, and other small animals at the Cleary Lake Veterinary Clinic in Prior Lake, Minn. The first thing Awes does during an appointment is watch the patient walk. Here she observes canine client Olivia on April 27, 2011. "I'm looking for any asymmetry in their movement. I'm watching the movement of the neck, back, and pelvis as well as the length of the strides as they move," says Awes. "I watch everything. It helps me to establish a baseline for where they are at." (MPR Photo/Nikki Tundel) 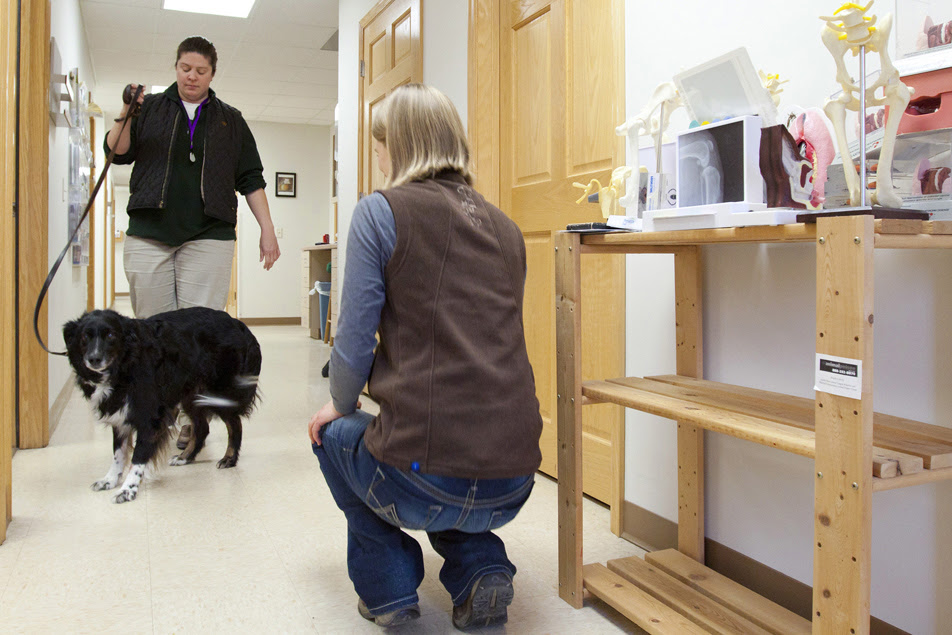 7 Prior Lake, MN, USA — Animal chiropractor Kyla Awes works on Hiro, a 3-legged dog with hip dysplasia and arthritis. "I often see dogs where surgery isn't an option," says Awes. "Maybe the owner can't afford it or maybe surgery is too risky. I can do a lot to make those dogs more comfortable and to improve their quality of life." (MPR Photo/Nikki Tundel) 8 Prior Lake, MN, USA — Kyla Awes gives Olivia a neck adjustment at Cleary Lake Veterinary Clinic in Prior Lake, Minn., on April 27, 2011. "When I'm working on an animal, I'm feeling the motion of the joints," says Awes. "What I'm looking for is any restriction of movement. And that's where I need to adjust." (MPR Photo/Nikki Tundel) 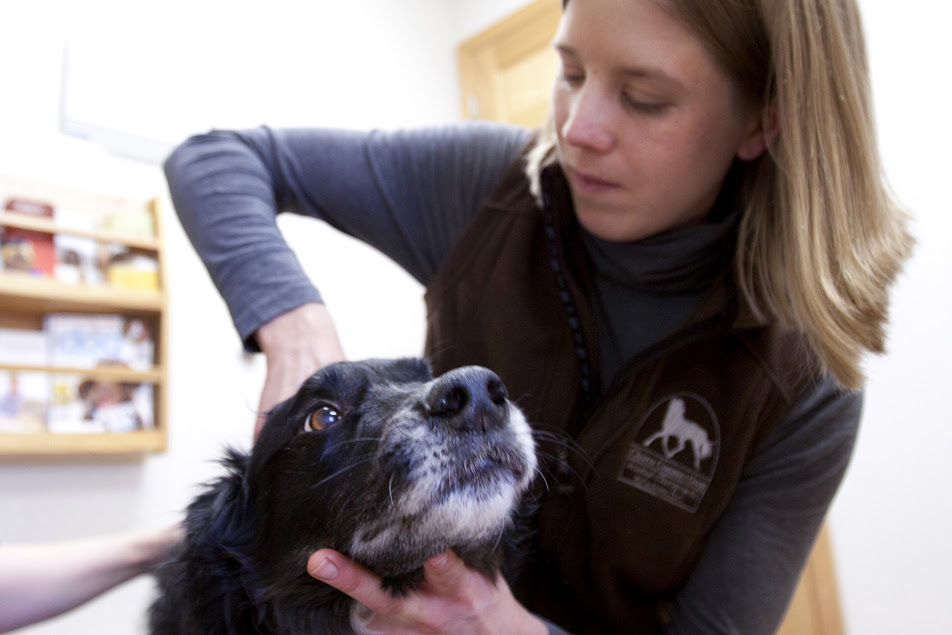 9 Prior Lake, MN, USA — Kyla Awes (left) and Julie Fahey share stories about their pets in an exam room at Cleary Lake Veterinary Clinic as Fahey's dog Molly looks on. Awes treats many dogs like Molly, a Corgi. "When a dog's back is longer than its legs, that can put extra stress on the spine," says Awes. (MPR Photo/Nikki Tundel) 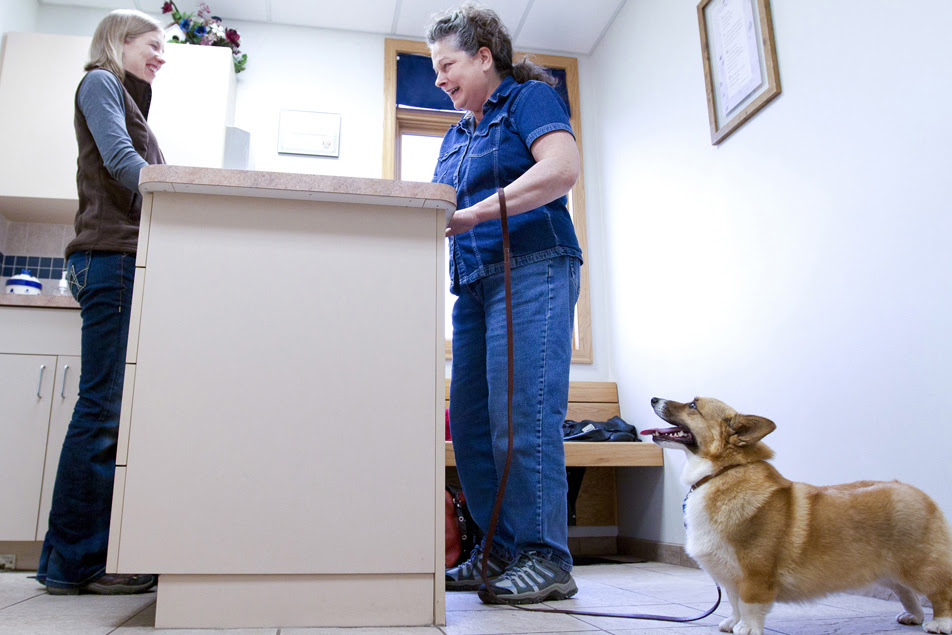 10 Maple Plain, MN, USA — Assistant Stacy Sletten (left) watches as animal chiropractor Kyla Awes works on Elle, who's part Thoroughbred and part Quarter Horse, at a private barn in Maple Plain, Minn., on April 7, 2011. "I'm still amazed all the time by the impact chiropractic care can have," says Awes. "I had one horse that was bucking to the point where it was a safety issue for the rider. After one adjustment, the bucking stopped. The horse had been in pain and he was simply trying to tell us that." (MPR Photo/Nikki Tundel) 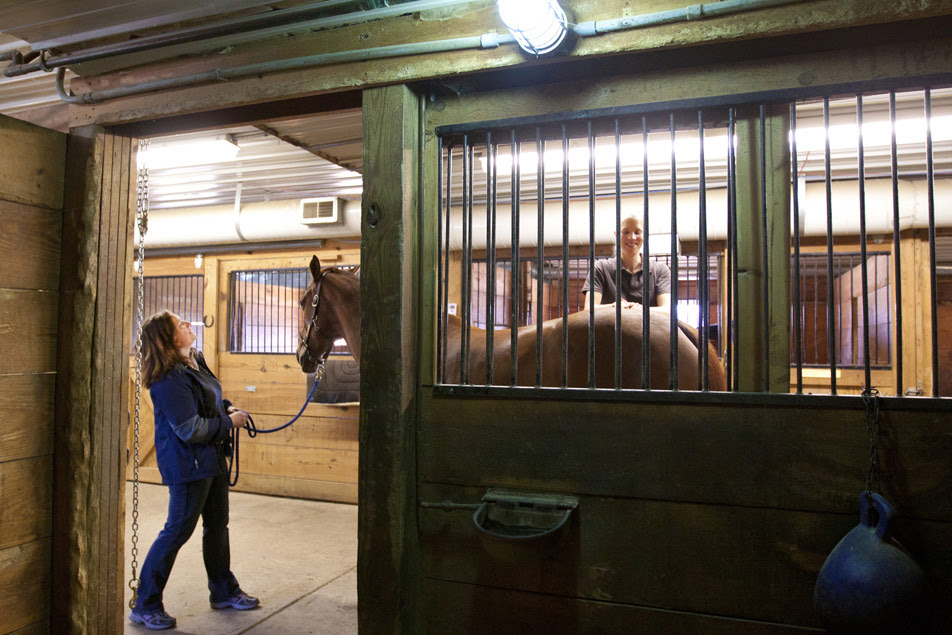 11 Maple Plain, MN, USA — Charlie, a Quarter Horse, relaxes as Kyla Awes adjusts her spine. "You do need more force on an adult horse than, say, a human," says Awes. "But how you get that is with the speed of your movement -- because force is equal to mass times acceleration. That means that the adjustments are very quick, and I'm effective without having to be aggressive. This makes the adjustments more gentle for the horse." (MPR Photo/Nikki Tundel) 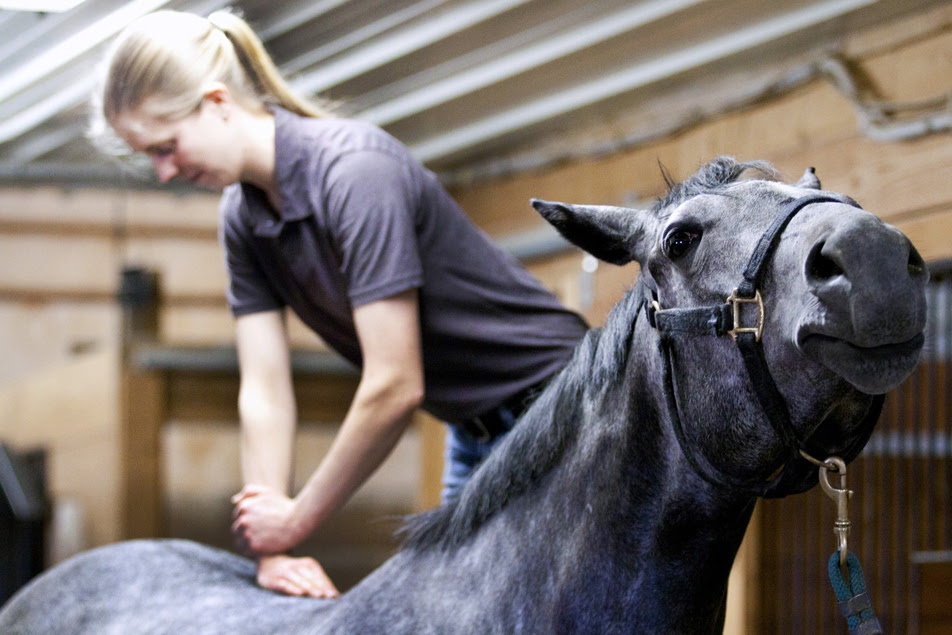 12 Maple Plain, MN, USA — "I really love my job," says animal chiropractor Kyla Awes, with Lola, an American Warmblood. "I've always loved animals, and they give us so much. So to be able to help an animal, I feel very lucky." (MPR Photo/Nikki Tundel) 13 Maple Plain, MN, USA — Kyla Awes works on Lola's neck. "I often tell people that animals tend to be better patients than humans," says Awes, "People have preconceived notions. They think they know what you're going to do before you do it so sometimes they'll tense up. Whereas animals, well, if you help them, they're happy." 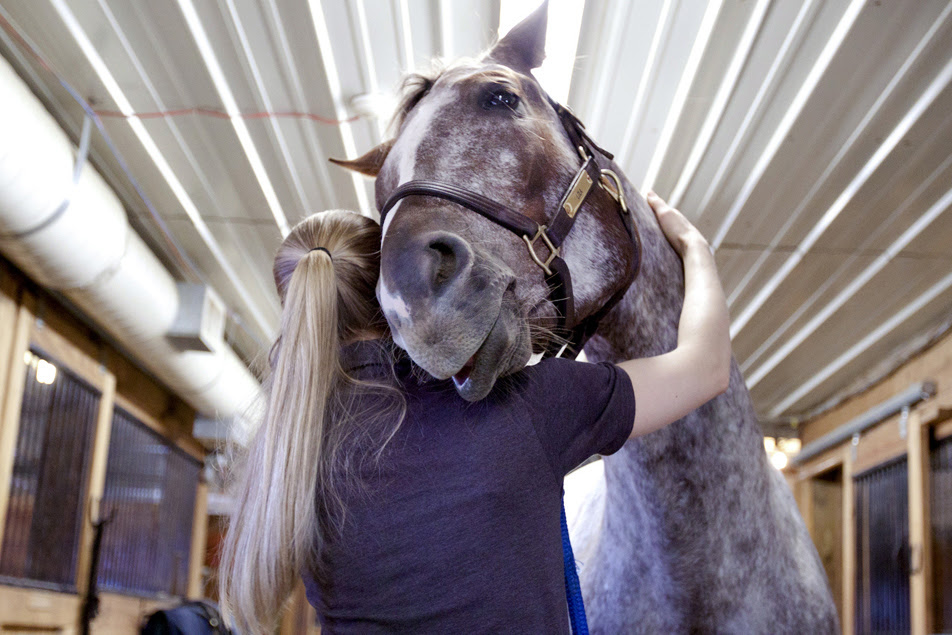