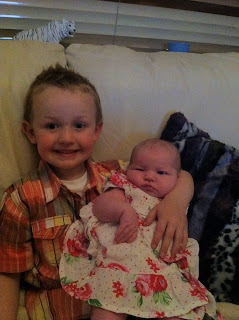 Those of you who believe in a deity, please remember the Carney family in your prayers as the youngest member, 5-month-old Enfys, is currently very poorly in hospital. Enfys and her elder brother Leo are the neiflings of CFZ regular Liz Bitakaramire.
Posted by C-E B at 12:52 PM No comments: 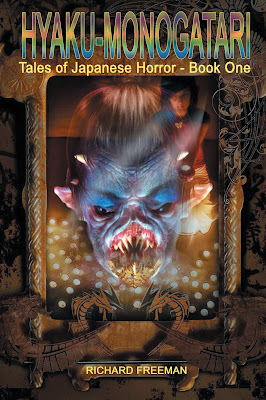 In Edo Period Japan, the game of  Hyakumonogatari - or one hundred stories - was a popular pastime. A hundred candles in blue lanterns were lit and placed on a table before a mirror. Each person would tell a story of a ghost, monster or strange occurrence, then blow out one of the candles. When the last candle was blown out it was said that a horned blue spirit, Aoandon, would manifest in the mirror.

Hyakumonogatari grew so popular that in 1908 the Japanese government forbade the telling of horror stories. Doubtless the gatherings carried on as a clandestine thrill, and what stories must have been told!

Japanese folklore is the strangest on earth. Its monsters and its ghosts (collectively known as yokai) outstrip any other culture in their sheer weirdness.

Here, in the first of a four-volume collection, is the beginning of a modern Hyakumonogatari. This menagerie of yokai includes hair-eating horrors, spawning dragon-gods, zombie whales, venomous rats, cannibal skeletons with slime-mould brains, ancient hominans, perverse water imps, devils of straw and monsters of cloth.

Sick of vampires and werewolves? This night parade of Japanese daemons will re-light your love of horror with a whole pantheon of new ghosts and monsters from the pen of Richard Freeman who brought you the acclaimed horror collection : 18 Tales of British Horror.
Posted by Jon Downes at 12:34 PM No comments:

When a company announced last week that they had sequenced the Bigfoot genome, it seemed too good to be true. And probably is.

In the press release, DNA Diagnostics claimed that Texas veterinarian Melba Ketchum had sequenced the DNA of Bigfoot (aka Sasquatch). The company stated that the sequencing results confirm that Bigfoot exists and is a “novel hominin hybrid species...a human relative that arose approximately 15,000 years ago as a hybrid cross of modern Homo sapiens with an unknown primate species.” So, do Bigfoot enthusiasts have reason to rejoice? Well, not just yet.

In response, the science blogosphere erupted with skepticism, and even ridicule, of Ketchum and her team. The press release is short on details and states that the study is still under peer review. So, no one can get a look at the actual data. Without that, it’s impossible to evaluate Ketchum’s claims.

In an article for the first edition of Cryptozoology Bernard Heuvelmans wrote that cryptozoology is the study of 'unexpected animals' and following on from that perfectly reasonable assertion, it seems to us that - whereas the study of out of place birds may not have the glamour of the hunt for bigfoot or lake monsters - it is still a perfectly valid area for the Fortean zoologist to be interested in. So, after about six months of regular postings on the main bloggo, Corinna has taken the plunge and started a 'Watcher of the Skies' blog of her own as part of the CFZ Bloggo Network.

So today lurches forward into the unknown. I am not over-fond of this time of year: it is cold, expensive and ever-so-slightly-tedious. I will be very glad in a month's time when the days are slowly getting longer and the first frogspawn is in the ditches....

The Gonzo Daily is - as the name implies - a daily online magazine (mostly) about artists connected to the Gonzo Multimedia group of companies. But it also has other stuff as and when the editor feels like it. The same team also do a weekly newsletter called - imaginitavely - The Gonzo Weekly. Find out about it at this link:
http://gonzo-multimedia.blogspot.com/2012/11/all-gonzo-news-wots-fit-to-print.html
Jon Downes, the Editor of all these ventures, is an old hippy of 53 who - together with his orange cat - puts it all together from a converted potato shed in a tumbledown cottage deep in rural Devon. He is ably assisted by his lovely wife Corinna, his bulldog/boxer Prudence, his mother-in-law, and a motley collection of social malcontents. Plus... did we mention the orange cat?
Posted by Jon Downes at 12:28 PM No comments:

Ever seen a two-tailed Alpine impossibeast? Well, now you can!

On this day in 1872 the Mary Celeste was found abandoned with no sign of any incident that would have caused her crew to abandon ship.