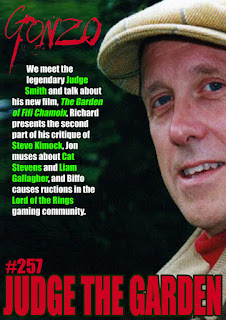 Gonzo Weekly #257
THE A IS FOR APPLE ISSUE
http://www.gonzoweekly.com/

We meet the legendary Judge Smith and talk about his new film, The Garden of Fifi Chamoix, and still in a horticultural mood Alan visits an Apples and Art exhibit which sounds cracking fun. Richard presents the second part of his critique of Steve Kimock, Jon muses about Cat Stevens and Liam Gallagher, and Biffo causes ructions in the Lord of the Rings gaming community.

And there are radio shows from Mack Maloney, Canterbury sans Frontieres and Friday Night Progressive. Strange Fruit, is taking a week off, but will be back soon. We also have columns from all sorts of folk including Roy Weard, C J Stone, Mr Biffo, Neil Nixon and the irrepressible Corinna. There is also a collection of more news, reviews, views, interviews and southern dibblers who have books to peruse (OK, nothing to do with small marsupials who have been to the library, but I got carried away with things that rhymed with OOOOS) than you can shake a stick at. And the best part is IT's ABSOLUTELY FREE!!!

countylive.ca
Bigfoot was not only spotted in Prince Edward County, he was filmed here as well. The 'best Bigfoot ever' is proposed in The Woodsmen, created by

Today Marks 50 Years Since the Iconic Patterson-Gimlin Bigfoot Footage Was Filmed
100.3 Jack FM
To Bigfoot aficionados, this one minute footage became the most significant film ever made.

Kingsport Times-News: Bays Mountain to host inaugural Bigfoot Day Celebration
Kingsport Times News
1 / 1 We're not saying Bigfoot exists, but if he is real, why wouldn't he hang out at Bays Mountain Park? The 3,550-acre nature preserve would provide ...

Cowboy claims Sasquatch has large breasts and loves being filmed after capturing footage of ...
The Sun
A COWBOY who captured famous footage of "Bigfoot" claims the mythical beast had "boobs" and loved being filmed. Bob Gimlin and Roger Patterson ...

Bigfoot – Happy Anniversary
Troy Jackson Outdoors
Fifty years ago today, Bigfoot was reportedly shot. On film, that is. “Baby what a big surprise, right before my very eyes.” – Baby, What A Big Surprise, ...
Posted by Jon Downes at 1:34 PM No comments:

THE GONZO BLOG DOO-DAH MAN IS OVER HERE

ON THIS DAY IN - 1942 - During World War II, the British began a major offensive against Axis forces at El Alamein, Egypt.
And now some more recent news from the CFZ Newsdesk