Once upon a time, a long time before Kurt Cobain, there was a band called Nirvana. They were an excessively psychedelic duo, and I first came upon them when I found a second-hand LP called Local Anaesthetic, which I thought had the best cover I have ever seen.

Now their main man has a new album out, and it is well worth you checking out:

I have a sneaking suspicion that the only two folk regularly reading this blog who are aware of this are me and Andy Roberts. That would be a shame.
Posted by Jon Downes at 11:50 AM 1 comment:

MATT AND EMMA RESCUE A PUPPY 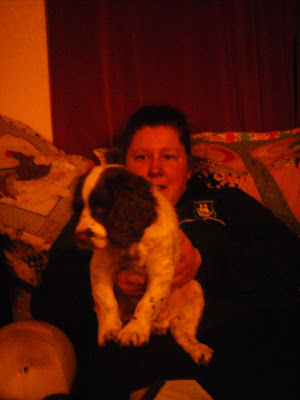 The Osbornes turned up last night with a ten-week-old puppy they are fostering. As regular readers know, they do dog-walking and pet-sitting (no, that doesn't mean that they sit on pets). This little fellow was deposited with them the other day and the owners simply didn't return.

Guyana
Guyana was formerly known as British Guiana so it is perhaps not that surprising that they play cricket and its not unusual to find a Guyanan-born player in the West Indies team. The country is also known as the place where, in 1978, Jimmy Jones managed to instigate the deaths of 918 members of the Peoples Temple cult with the aid of a cyanide-laced Flavor Aid drink. But it isn’t just poisoned soft drinks that could spell danger there is also the Waracabra Tiger to watch out for.

While many mystery cats could be dangerous (and you will certainly read more about some of them in the coming months as we travel the whole wide world) could there be anything more frightening that the Waracabra Tiger? Why should this mystery animal be such a terror? Well, they are described as being jaguars that hunt in a group.

The jaguar is the largest cat to be found in the wild in the Americas and is a fearsome predator in its own right, but if stories of the Waracabra are true there is a jaguar-like animal that runs in a pack. In 1898 Henry Kirke wrote in Twenty-Five Years in British Guiana of the animal ‘the Indians profess the greatest terror of.’ It seemed that when the natives heard the howls of the beasts they headed for their boats and sought safety surrounded by water.

Of course not everyone is convinced that the Waracabra Tiger really is a big cat; there is a theory that it just stems from sightings of the bush-dog - the trouble with that theory is that the bush dog is a lot smaller than the jaguar and not known for its howl.

Once again it appears that another cryptid mystery awaits a solution but one thing is for certain: if you go looking for the Waracabra Tiger make sure your boat is nearby.

Next stop: Venezuela
Posted by Jon Downes at 9:30 AM 1 comment:

100 years of British Birds magazine on a single disk, with searchable PDFs so you can search locate any article, note, letter or picture on any species or location. BBi is a multimedia DVD-ROM that provides instant access to every article, every photo, every illustration ever published in the journal British Birds since its launch in 1907. The entire 100-year archive is fully searchable by species, author, photographer, location or topic as well as by date of publication, so can quickly find, for example:

All the photos of any species
All the illustrations by any artist
All the letters by any author
All the articles on any topic, e.g. identification
All the BBRC rarities reports
All mentions of your own name!!
Posted by Jon Downes at 9:25 AM No comments:

On this day in 2003 Adam Faith died. Faith was best known as a singer but was also the star of the classic cryptozoological comedy film What a Whopper in which a man fakes a Nessie sighting. The film's screenplay is written by Terry Nation and also stars Charles Hawtrey.
And now the news:

Time lapse video of the life of a monarch butterfly:
http://www.youtube.com/watch?v=lUBRFQMMp9w&feature=related
Posted by Jon Downes at 9:21 AM No comments: