RSPB: NO AMBITION FOR MARINE LIFE IN THE WEST COUNTRY

The Government’s sheer lack of an adequate plan for designating marine protected areas in English waters to meet the international 2012 deadlines has become apparent.

Following a lengthy and costly process to identify a network of sites for marine wildlife, the Government has announced [ http://www.defra.gov.uk/news/2011/11/15/wms-marine-conservation-zones/] that of the proposed national list of 127 sites - which will now not go for consultation until the end of next year - only a subset will actually be designated initially. Moreover, after comments made by Government last week, the RSPB understands that the initial number of sites may now total fewer than a quarter of the original proposed list.

Tony Whitehead, spokesperson for the RSPB in the South West said: “Two years ago, we were delighted that the importance of marine conservation was finally recognised with the introduction of the UK Marine & Coastal Access Act. However, the latest position suggests the Government is showing no ambition for providing a comprehensive network of marine protected sites in a timely fashion.”

Apart from the reduction of the number of proposed marine protected sites that will be designated in a first tranche, the RSPB is concerned there are no guarantees about when further sites will be put forward after this initial and limited tranche.

The RSPB also points out that the full complement of 127 proposed marine conservation zones still does not include many sites proposed for mobile species, such as dolphins and seabirds.

With such sweeping reductions planned in the number of sites going forward to designation after next year’s belated consultation, the RSPB is very concerned there will be nothing left in the English marine conservation zone network for seabirds at all, and the benefits for other marine wildlife will be dramatically reduced.

A lack of supporting evidence for sites is being blamed now as the stumbling block for the shortfall in the first tranche of sites, but the lack of marine data is news to no-one. The RSPB has been highlighting the dangerous lack of investment in data collection at sea to Government for over a decade and the implications for marine protected area designation for many years; so far to little avail.

From the outset, the English regional projects, including Finding Sanctuary which covered the south west, were set up to work on the basis of “best available evidence”, which is exactly what they have done. While the available evidence may not be perfect, it is certainly enough to support site designation in many locations.

Thousands of RSPB members and supporters have stepped up to the challenge facing Government on marine protection by supporting our call for a coherent network of marine protected areas across the UK, including sites for seabirds. They have also made donations to our campaign to fund more marine research and monitoring. This announcement shows clearly that the Government cannot demonstrate the same level of commitment.

Martin Harper, RSPB’s Director of Conservation added: “While wanting to wear the mantle of ‘Greenest Government Ever’ our Government seems strangely reluctant to invest in and come up with a convincing business plan to deliver the commitment for protecting our seas. We can, and will, continue to do all we can to support marine research and site designation, but in reality we will never get the evidence we need to support the marine protected network area unless Government steps up and provides resources to support adequate monitoring of our sealife.”

To support the RSPB campaign and step up for seabirds, please visit www.rspb.org.uk/marine


to sign a pledge encouraging the UK government to protect all the sites of importance for seabirds in our waters.
Posted by Jon Downes at 1:03 PM No comments:

KITHRA: One of her friends was killed by the Manson Family

http://kithraskrystalkave.blogspot.com/2011/11/yolande-and-marina.html
Posted by Jon Downes at 12:49 PM No comments:

FANTASTIC NEWS: Hula painted frog back from the abyss 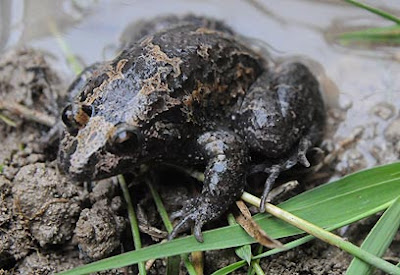 There is a video at this site but I couldn't embed it properly.

For sixty years the Israel painted frog, Palestinian painted frog or hula painted frog (Discoglossus nigriventer) has been held up as a black example of how mankind's meddling with the environment destroys species.

The deliberate draining of the Hula Marsh destroyed several species of fish, and until yesterday it was thought that this frog species was also gone forever.

However, a routine patrol at Ha'H 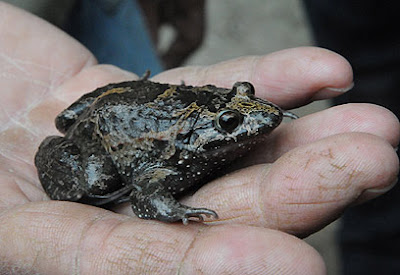 ula lake found an unknown frog, and scientists have confirmed that it is one of this species!
Posted by Jon Downes at 12:40 PM No comments:

BRINGING DALE'S POSTS UP TO DATE

Breakfast Television, CityTV Toronto’s popular morning show, has caused yet another stir in Ontario. When locals “discovered an alligator” in a local pond, CityTV and BT made it news. Now they’re at it again, and the possibility of an odd creature in Ontario has got people talking. In a casual conversation, host Kevin Frankish mentioned that there “have been roadrunners sighted in Ontario.” In the few hours since, I have received more than a dozen emails asking if this is true. The simple answer is…maybe.

On this day in 1865 Mark Twain’s story “The Celebrated Jumping Frog of Calaveras County” was first published.
And now the news:

The Celebrated Jumping Frog of Calaveras County told through the medium of Lego:
http://www.youtube.com/watch?v=FXivgpLSQeo
Posted by Jon Downes at 12:37 PM No comments:

http://frontiersofzoology.blogspot.com/2011/11/2nd-coelacanth-population-found-off.html
Posted by Jon Downes at 12:35 PM No comments:

http://cedar-and-willow.blogspot.com/2011/11/nancy-carroll-as-beech.html
Posted by Jon Downes at 12:34 PM No comments:

AFTER A LONG DELAY, A&M 49 IS FINALLY READY 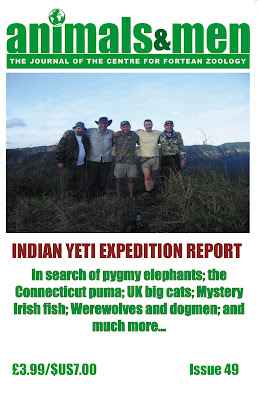 I don't know why it has taken so long, but the new issue is finally ready. It will be dispatched before Christmas....
Posted by Jon Downes at 12:28 PM No comments:

It seems that Dipu Marek's wife has just died. More news as we get it.

For those of you not in the know, Dipu is the Indian researcher with whom the CFZ team liaised on the 2010 expedition. He was also immortalised in song by Kate Bush

See the feature-length film of the Indian expedition:
http://www.youtube.com/watch?v=PEoMAS8J7xw

There will be a collection for him, and for the widow of Sahar Dimus, the Sumatran guide who worked with the CFZ on all our orang-pendek expeditions.
Posted by Jon Downes at 12:21 PM No comments: 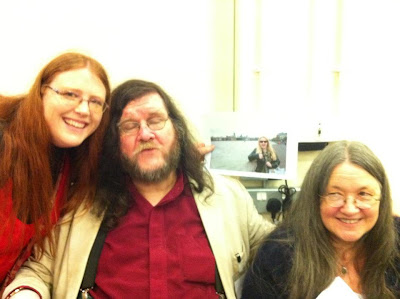 We had a great time at Uncon, and then at my Mama-in-law. Apparently Rebecca L is gutted at not being able to make it this year so Tania (bless her) made sure that she was included in every picture by brandishing a picture of her.

It will take me a couple of days to get back in the swing of things, but I would like to thank Graham and Liz for their sterling work in keeping the bloggo afloat in the abscence of the captain....

I would also like to thank everyone who helped at Uncon, especially Shosh and Gavin, and Tim and Graidi. Wot a bunch of sweeties.

(Yes I have trimmed my beard, and about time too)
Posted by Jon Downes at 11:53 AM 2 comments:

Email ThisBlogThis!Share to TwitterShare to FacebookShare to Pinterest
Labels: unconvention

On this day in 1968 Mervyn Peake, the author of the Gormenghast saga died.
And now the news:

Hummingbirds shake their heads to deal with rain
Logging threat fears for rare lobster
Camels 'left to rot' after mass cull
Caribbean's rarest species given lifeline by educa...
The Python Laundry (Via Herp Digest)
Dinosaur that acted like a Vegas showgirl!

And a clip from the BBC adaptation of Gormenghast featuring a young “Henry VIII” from “The Tudors”:
http://www.youtube.com/watch?v=bZiXWhygryA
Posted by Jon Downes at 11:46 AM No comments: