SASKIA: How a stingray sheds its sting

The CFA intern Saskia England IMd me excitedly earlier with this picture and the message: "Dad's female has successfully dropped her barb!"

As I know that Sas's father keeps freshwater stingrays, I was not as perturbed by this message as I otherwise might have been, so I asked for further details.

She wrote back with the following picture, and this message: "The larger one is the female's (which she shed today) and the smaller one beside is the male's from a month ago".

I didn't even know that stingrays shed their stings and said so. She replied:

"They shed in order to grow new ones.. Just like sharks with their teeth"

I was completely intrigued by this stage, and she wrote me the following little essay:

Unlike a wasp stinger, a stingray stinger is not hollow and does not inject anything. It is simply a physical weapon, like a dagger, not a chemical one. Stingrays have a set of barbs each one smaller than the next. As one is used the next one in line grows to replace it. Very similar to the way sharks replace lost teeth. Stingray skin is covered partially in dermal denticles (literally ‘skin teeth’) that contain dentine just like normal teeth. They look like short pointed spikes when viewed under a microscope. The ray’s tail spines are modified dermal denticles that have become elongated so that the can be used as defensive weapons.

So if you zoom in on the picture you can see it looks very similar to a shark tooth...

And she signed off with a picture of her Dad's rays. What a nice way to brighten up the last evening of my 54th year! 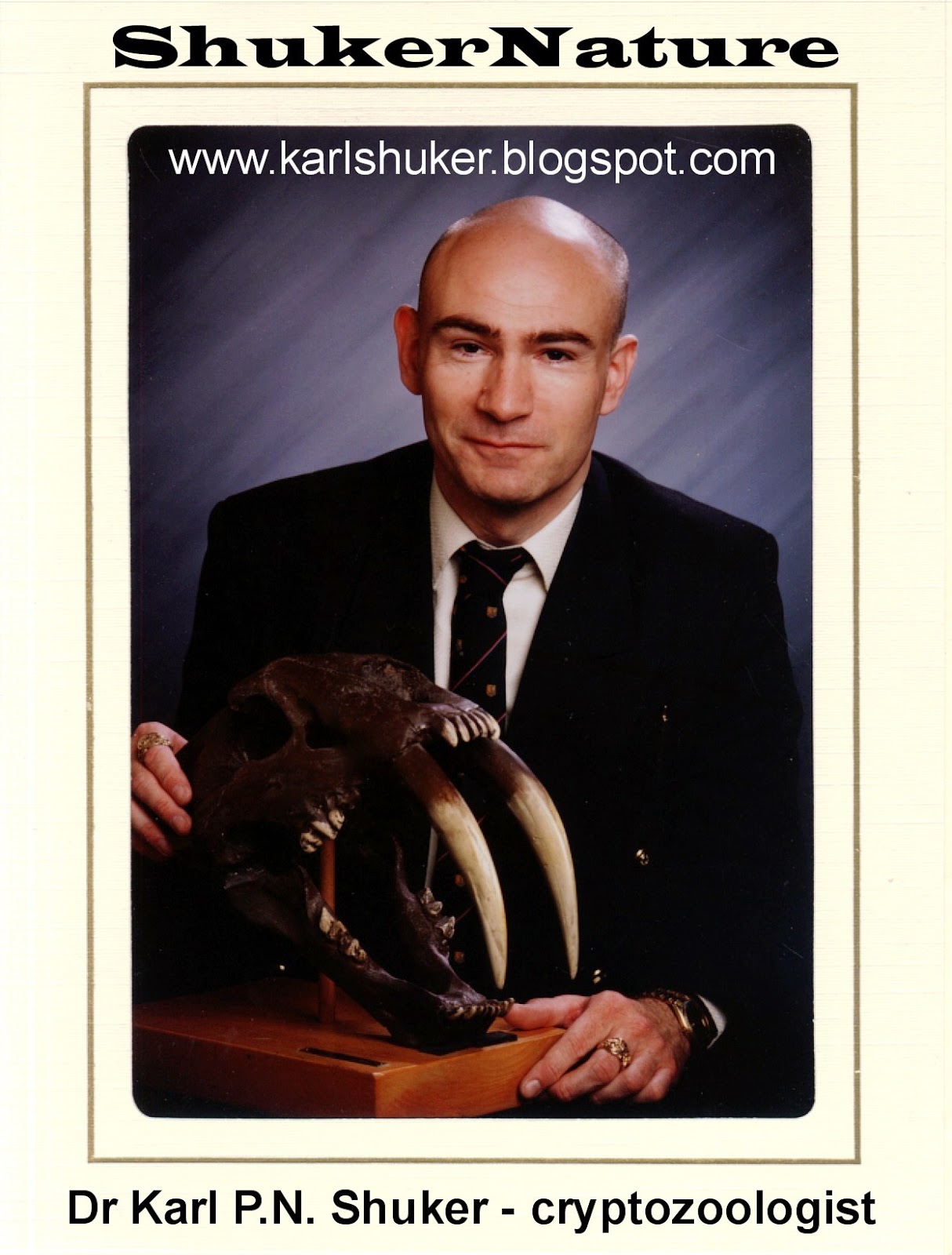 What has the head of a hyrax and the body of a viper? Why, the das-adder, of course! Karl Shuker explains.

THE GONZO BLOG DOO-DAH MAN IS RELATIVELY PLEASED WITH LIFE

www.gonzomultimedia.co.uk/about.html
I cannot believe that it has been a whole week since the Weird Weekend kicked off. And what a peculiar week it has been. On the late morning of Saturday 16th August my friend and colleague Lars Thomas, together with his son, was walking around the village of Hartland when they saw a large tortoiseshell (Nymphalis polychloros) basking in the sun on the perimeter wall of one of the gardens. He watched it for three or four minutes before it flew away.
Lars is a professional Naturalist, and someone whom I trust implicitly.
I am aware that Hartland could be seen as being a little far north for vagrant insects to have crossed the channel but, it is only sixty odd miles from Dartington Hall in Southern Devon where they have been reported in recent years. I am making no claims as to the provenance of this insect, and extrapolating nothing from its sighting apart from the fact that it was seen by an impeccable witness.
I am also very happy to say that The Small School made a substantial profit on the Weird Weekend having banked over twelve hundred quid. That is very gratifying, and I hope that we can improve on this tally next year.
Jon Anderson on Working With Jean-Luc Ponty
http://gonzo-multimedia.blogspot.com/2014/08/jon-anderson-on-working-with-jean-luc.html
Making The Label Matter: A Record Company's Return...
http://gonzo-multimedia.blogspot.com/2014/08/making-label-matter-record-companys.html
Gourmet Weed Dinner at Hunter S. Thompson's Ranch
http://gonzo-multimedia.blogspot.com/2014/08/gourmet-weed-dinner-at-hunter-s.html
Yes struck familiar chord at KC concert
http://gonzo-multimedia.blogspot.com/2014/08/yes-struck-familiar-chord-at-kc-concert.html
THOM THE WORLD POET: The Daily Poem
http://gonzo-multimedia.blogspot.com/2014/08/thom-world-poet-daily-poem_21.html
GONZO TRACK OF THE DAY: Kevin Ayers - Song For Insane Times
http://gonzo-multimedia.blogspot.com/2014/08/gonzo-track-of-day-kevin-ayers-song-for.html
The Glory of Yes Can a ’70s prog-rock band heal you
http://gonzo-multimedia.blogspot.com/2014/08/the-glory-of-yes-can-70s-prog-rock-band.html
The latest issue of Gonzo Weekly (#91) is available to read or download at www.gonzoweekly.com. It has Stuart Nicholson from Galahad on the cover and an interview with him inside. We have Merrell Fankhauser's Palmdale concert in pictures, and the story of what happened when the Gonzo grande fromage visited the stage adaptation of 'Fear and Loathing in Las Vegas'. Rick Wakeman fans will find a critique of the new box set critiqued by Doug Harr. There are also new shows from the wonderfully eccentric Jaki and Tim on their Submarine, from Canterbury Sans Frontières and from the multi-talented Neil Nixon at Strange Fruit and from M Destiny (hopefully fully recovered from his recent illness) a collection of more news, reviews, views, interviews and long nosed potoroos (OK, no weird little marsupials, but I got carried away with things that rhymed with OOOOS) than you can shake a stick at. And the best part is IT's ABSOLUTELY FREE!!!
A couple of links are missing, and the date for Tim and Jaki's show is wrong, but this is because we rushed it out to have it finished before the great and the good of Forteana descended on us for the Weird Weekend. I hope they will forgive me.

*  Jon Downes, the Editor of all these ventures (and several others) is an old hippy of 54 who - together with an orange kitten named after a song by Frank Zappa puts it all together from a converted potato shed in a tumbledown cottage deep in rural Devon which he shares with various fish, and sometimes a small Indian frog. He is ably assisted by his lovely wife Corinna, his bulldog/boxer Prudence, his elderly mother-in-law, and a motley collection of social malcontents. Plus.. did we mention the orange kitten?
Posted by Jon Downes at 1:24 PM No comments:

Before It's News
We're taking a look at the controversial bigfoot video of a man chasing a bigfoot through the woods near Blue Ridge, Georgia from 2013. Not only ...

Forget Bigfoot Sighting Databases, Now There's a Bigfoot Face Database!
Bigfoot Evidence ⋅ Matt K.
"How to report a Bigfoot face in our videos for inclusion into the face database. A growing interest in participating in virtual Bigfoot Research has led us ...

California Bigfoot Hoax?
Bigfoot Research News
A California woman claims to have filmed a Bigfoot while out walking in the forest. I wish there were more details but there isn't. The lack of information

Bigfoot sighting outside Dagenham Asda
Barking and Dagenham Post
But photographic evidence, seen by the Post, appears to show a Bigfoot greeting shoppers at the car park of Dagenham Asda. The brown hairy ...
Posted by Jon Downes at 1:19 PM No comments:

ON THIS DAY IN 1923 - In Kalamazoo, Michigan, an ordinance was passed forbidding dancers from gazing into the eyes of their partner.


AND TO WHISTLE WHILE YOU WORK... (Music that may have some relevance to items also on this page, or may just reflect my mood on the day)
Posted by Jon Downes at 7:13 AM No comments: