From Nick Redfern's "There's Something in the Woods...":
Neil Arnold on Vampires

So, sorry I haven’t been uploading to the blog lately, it’s just that it’s the first week of the holidays. And I know you know I know you know how tired we all are at the end of the term.

My first year at Secondary School has flown by, and I am pleased to say I received no detentions throughout the whole year.

I’m going to blather on about superheroes! Because I can! Would you say they’re a type of cryptid..?

Oh well, here it is anyway. People might claim that the reason for fictional superpowers is magic. Unfortunately (me being a person who puts all her faiths in Science and ignores everything else), I can’t quite see this happening. I’m a bit of a nutter on superheroes and heroines, and it was only a matter of time until I poured out all my ideas into a blog. If you’re not the Marvel type, look away.

What do you think makes a hero? Is it the hard work they put into helping others, or is it how they act? For instance, Batman is your worst nightmare, yet he’s a little bit... sick-minded, shall we say? Superman’s just a bit BOOM-here’s-a-superhero-with-every-imaginable-power-IN-YOUR-FACE!

Wolverine... now there’s a superhero. Feral senses, adamantium making him near-invincible, an amazing healing factor and claws in his forearms!
I’m so sad!

Catwoman. She’s a bit like Batman, always just going that extra edge. However, she saves people, in her own strange way. She doesn’t get much recognition, but hey! She’s famous!

Now who would you make up if I asked you to create your very own superhero/heroine? Blog Man? The Caped Cryptozoologist? The Cloaked Cryptid?

Fail. He also has great big white wings that come out from his back. There’s a minor healing power around his shoulder-blades where the wings come out, leaving no indication that it’s actually him. There’s also weird symbols on the palms and backs of his hands.

Jaguar is eternally 19. Here’s the beef: She’s very much like Wolverine, apart from the obvious fact that she is a woman. However, where Wolverine has 3 claws that extend from his knuckles when his fists are clenched, she has four. Instead of Adamantium, she has a completely made-up metal called Lontoca coating her bones. Lontoca is the product of a chemical reaction between genes in her bones, named Commutatio, and a chemical called Metadermicreo.

As you can probably guess, all of the above named forms of matter are completely made-up.

Which I would class as an admirable feat… but that was just my inflated opinion of myself talking there.

Okay. Now for Phoenix. She has the power to manipulate light at her own will, and also heat. At her most powerful, she can control fire as well, so with all these powers combined, she could make the natural oils on people’s skin inflame. How does she do this, I hear you ask? She makes the molecules holding whatever she wants to burst into flames vibrate. Conjuring light up out of air is a completely different matter, however. She sort of… copies the light matter and basically messes about with it.

She can transform into a lioness (which I would imagine is painful) and can wield a sword like nobody else can. She trained with the, and I quote the creator of Eclipse, bets fighters in the world. However, she is very secretive about her character and so I won’t write who the fighters are. Eclipse has the power of gravity manipulation, therefore she can walk on walls and ceilings and stuff. She can also slam somebody into the ground from a great distance, so if you annoy Eclipse…

…you’re basically doomed. In her beast form, she has a blue diamond sunk into the flesh on her side.

AND THAT IS ALL ON OUR CHARACTERS.

But there are a lot of superheroes in the real world.

You can be a hero too; like Jon is (he makes us famous via blog). Do helpful stuff! Love everything! You don’t have to be in a yellow Spandex suit to make a difference... 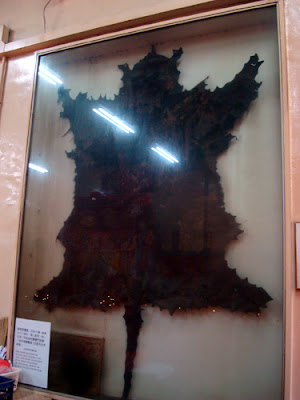 The blackened skin of the last tiger shot in Hong Kong is displayed at the Tin Hau Temple in Stanley on Hong Kong Island. The tiger was bagged outside the local police station in 1942 by officer Ruh Singh. The beast weighed in at 240 pounds and was 73 inches long, standing 3 feet tall.

Hong Kong was under Japanese occupation at the time.

Despite the south west being globally-renowned for its immense populations of seabirds – including, shearwaters, petrels and gannets - laws to designate marine protected areas in the region are failing these iconic species because too few seabird sites are being protected, says the RSPB – Europe’s largest wildlife conservation charity.

Kate Sugar is an RSPB marine policy officer. Commenting on the relative failure of seabird protection across the UK, she said: “The UK Government has an international commitment to designate a comprehensive network of marine protected areas by the end of next year. But for seabirds, at least, we’re on course to fail because the number of sites being considered is woefully inadequate and in some cases seabirds are being excluded from the designation process.

The seas around the UK, and especially in south west, are rich in wildlife, but they are also important for economic interests too. Fisheries, renewable-energy projects, oil and gas exploration, tourism, shipping and aggregate extraction are just some of the industries that are competing with each other and the environment for growth. We believe that wildlife must be safeguarded alongside the marine ‘gold rush’ that’s currently underway.. Protecting the most important sites would take them out of jeopardy and would provide much-needed clarity for marine developers and industry.

“Thankfully, most seabird nesting sites are already protected, but the areas where seabirds feed at sea are not, meaning that these species are only generally afforded protection on land. This is like having robust laws preventing burglary, while having no laws preventing mugging. Seabirds need protection at sea too.”

Commenting on the situation in the West Country the RSPB’s Tony Whitehead said: “In the south west we have important populations of seabirds such as Manx shearwater and storm petrel. We can protect these birds when there are nesting, and can improve their breeding conditions as we have done over the past few years on places such as Lundy, but once they leave the shore it seems this protection cannot be extended.

“From the best available data we have we know for instance that many seabirds including Manx shearwater, feed on and around the Celtic Deeps – an area of ocean over 100km north west of Trevose Head in Cornwall.

“This has been highlighted as a place that warrants protection but the UK Government has stated they will not allow any conservation objectives to be set for seabirds in places such as this. And this also extends to other mobile species such as dolphins. This is a nonsense. ”

Since 1979, the UK Government has had the power to designate marine sites of European importance for birds under the European Union Birds Directive. But, so far, it has dragged its feet and is currently running 30 years behind schedule, with only a minimum number of sites designated so far.

There is also new legislation in England and Wales enabling the designation of marine sites that are important at a national level. Currently, there are four English projects and one Welsh project – involving a range of stakeholders – selecting a network of nationally-important marine protected areas under the Marine and Coastal Access Act, enacted in 2009. But these projects are largely excluding seabirds from the designation process around English coasts and restricting the number and size of sites around Wales, meaning that some of the best and most important sites are not even being considered. Furthermore, the UK Government has recently revealed that it does not expect to complete its ecologically-coherent UK network of marine protected areas until at least 2015 – three years after the internationally-agreed deadline of next year.

Kate Sugar added: “It is ironic that despite our global importance for seabirds we’re consistently failing to protect them at sea. The UK has the largest European Union population of 15 species of seabird, including puffin, gannet and kittiwake. Therefore, it doesn’t seem appropriate that countries with shorter coastlines and smaller sea areas, like Germany and Denmark, are shaming the UK with the extent of their marine protected area networks.”

Please step up for nature and support our campaign to ensure seabirds are fully protected. Sign our pledge and call on the Minister to stand up for nature by signing a pledge urging the UK Government ministers to ensure that seabirds are safeguarded at sea. To sign the pledge visit: www.rspb.org.uk/marinepetition
Posted by Jon Downes at 12:02 PM No comments:

On this day in 1874 Charles Fort was born. If you don't know who Fort was then first of all did you wonder what the word 'Fortean' that we tend to bandy about quite a bit round these parts was in reference to and second of all, now is the time to educate yourself: http://en.wikipedia.org/wiki/Charles_Fort
And now the news:

Peacock Suit:
http://www.youtube.com/watch?v=faPxLESDpCE
Posted by Jon Downes at 11:53 AM No comments: